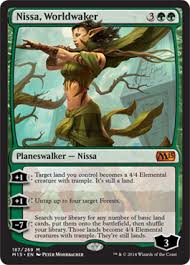 I will freely admit that when I first looked at Nissa, she didn't blow me away. Sure, it was cool to have her back and this time we didn't have to mess around with Nissa's Chosen, but did she really have much else going for her?

First glances are just that, and I think I've changed my tune a bit with the Worldwaker. Let's break her down.

Okay, this is certainly not setting the world on fire (ore really awakening it). When we have a new Jace that people don't even think is good that costs four mana and will have six loyalty after you activate it, Nissa kind of looks bad. But the two abilities more than make up for this downside.

Basically, we have something rare here: A planeswalker with two ways to protect itself. Nissa's first ability makes any untapped lands you have into blockers to keep her alive, or you can use them to immediate get in there, Koth-style. But let's say it's Turn 5 and you slam Nissa and making a land into a creature won't exactly save her. Well, how about the ability to cast something else?

She can do that too. Obviously the second +1 is more powerful while Shocklands are in the format, but even after that Nissa's second ability will pack a punch in the decks she finds a home in. This isn't exactly a Time Walk, but it does allow you to essentially have nine mana to play with on Turn 5 if you've constructed your deck around Nissa. Play her, untap the lands you just used, play another creature to protect her. Profit from there. I like.

The ultimate, of course, does what Planeswalker ultimates do: probably ends the game. If a Wrath of God variant shows up in M15 or the fall set, then the ultimate isn't guaranteed to win the game. Against most other decks, though, it is. And that's good enough for me.

What do you think? Is Nissa primed to take off in Standard, or will the Worldwaker remain a sleeper?