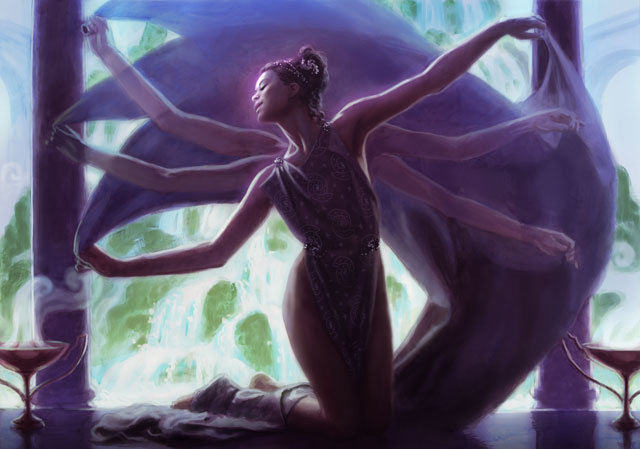 You see a great deal, My Oracle.

He folded his starry hands in front of him.

Yes, I am troubled, and not by Xenagos's ascension, nor by the existence of these world-walkers.

I am troubled by what troubles them.

There it was. The dark, ragged edge around which they'd been tiptoeing.

The merfolk Kiora, said Kruphix, came here from a world whose existence was threatened by something called the Eldrazi. They are vast and terrible, the equal of any god. And they eat worlds, My Oracle. Strip the flesh from the bones of the earth and leave a dead husk, moving on to the next.

If you can make yourself do it, there is value in reading up on some of the Vorthos stuff that Wizards commissions. It isn't just about immersing yourself in the lore of Magic in order to better understand casual players, although maybe that won't hurt. It's more about being able to predict future sets, tropes, reprised mechanics, etc. Much is spoiled for you if you pay attention, and my own personal bubble doesn't really allow any Vorthos junk to permeate. But since Ryan Bushard has adopted to persona "MTG Rion" to delve into the Vorthos universe to try and get some insight into future sets, I'm along for the ride. Will we see a return to Zendikar for a showdown between Eldrazi and Gods? More importantly, how likely is it that a return to Zendikar will bring about fetchland reprints? That's all speculation, but it's worth thinking about. Being prepared for future sets can make real financial sense. You never know unless you pay attention. Kelly Digges' "Uncharted Realms" is a decent place to start. I'm someone whose only foray into Vorthos was reading the book "Arena" as a pre-teen, but if I'm willing to give it a shot, you can, too.

4 thoughts on “The Value of Vorthos”