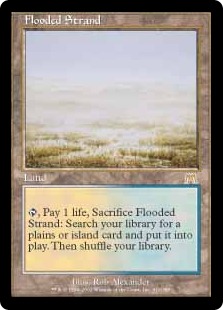 We got a lot of big news from ComicCon in San Diego yesterday. Commander Planeswalkers. Wedge colors in Khans of Tarkir with new names. An innovative new Draft structure. Some spoilers on future boxed products.

What we didn't get was any closer to know if the fetchlands are coming back in the fall.

So what do we know about the fetchlands? Basically, nothing. And that's not necessarily a bad thing.

Look, we know the reprints are coming sooner or later, whether it be the Onslaught cycle of the Zendikar one. We don't know when it will be, but we know it's going to happen. So the question is, what do we do before then?

After talking it over with Jason, we've decided the best course of action is the same one I advocated in a column a few weeks ago: sell now. Dealers have already started to lower the prices some, but nowhere near as much as they would have if the fetches had been revealed at ComicCon. The fact that they weren't revealed means dealers may not move all that much right away.

And it's not like either cycle has been on a huge tear recently. There's been year-over-year gains, yes, but the market has been incredible slow in the last several months. In short, I see the upside as being significantly more limited than the downside in the near future. That's enough for me to sell mine, and it's a decision I'm not going to feel bad about come October, regardless of whether or not we get more fetches.

9 thoughts on “Sell Fetches While You Can?”