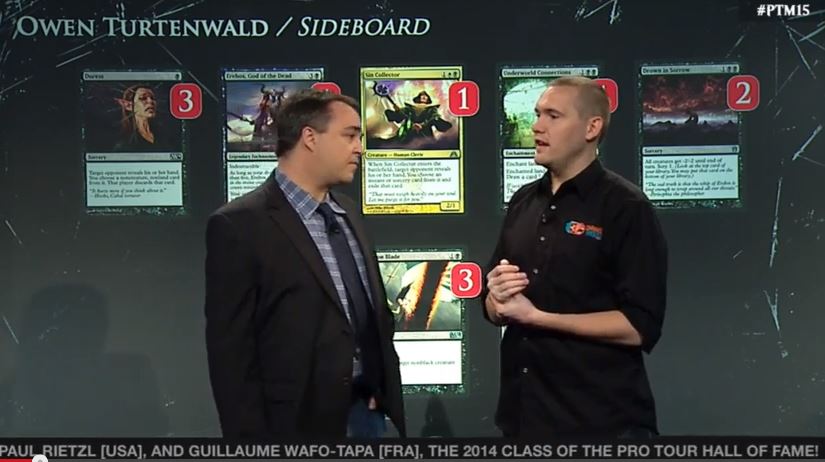 In May, Richard Hagon appeared on Limited Resources, my favorite Magic podcast. On that episode he mentioned that the coverage team is always working to improve the viewer experience and that they read every piece of feedback. He then provided a contact email on the show: mtgeurovideo@gmail.com.

The next day I wrote him with an idea:

"For Top 8 matches I have a simple modification that could make a big difference. Instead of having the players remain at the table for sideboarding, why not take them each to a designated “corner” where they can sideboard in front of the camera with a side-line reporter present.

Instead of dead air, viewers now can watch the player making sideboard decisions right in front of them.

After the player finishes sideboarding, he hands his deck off to a judge who shuffles for him and properly randomizes the deck. While the judge is shuffling, the player stays in his corner and is interviewed by the sideline reporter: How did that last game go for you? What did you side in and take out, and why? What do you expect your opponent sided in? Does your game plan change after what you saw? Have you played this matchup a lot in testing, and what are the key points?

Now instead of having commentators speculate about what the players brought in and why, the viewer knows exactly what they did and what they were thinking. Instead of dead air, you have a key strategic element of the game brought to life. You could even do a split screen showing each player making their sideboard decisions while the commentators look in."

Richard expressed interest and we we had a good discussion about the challenge of "noise-bleed," and the fact that players would "have to be a long way away to avoid overhearing during interviews etc." It sounded like the idea may not work in its initial incarnation, but he was going to discuss it with the rest of the coverage team.

This week I got the following email from Richard:

I hope you are watching the top 8 of pro tour magic 2015, where I am typing this from. If you are, you will see that we were able to take your idea and do something cool with it, namely recording sideboard I interviews with the top 8 before their matches. It has been very well received by the stream watchers, and I wanted to drop you a line to say thanks for the thought! Always glad to make coverage better,and this looks like something we may well do again.

I think they did a terrific job with this new feature, and it added a lot of depth to the waiting time between games.

I tell this story not to pat myself on the back but to remind folks that if you have good ideas for improving coverage, please don't keep them to yourselves. Magic coverage has improved tremendously over the past couple years, but judging from the stream chat and from twitter there is so much negativity. Live broadcasting is hard, and improvements take time. But it's worth remembering hat they they are working hard to bring the top product they can to the screen, and if you have ideas that can help improve the experience, don't gripe about it in the chat--let them know! It benefits us all when coverage improves.

3 thoughts on “Don’t Keep Your Coverage Ideas to Yourself!”