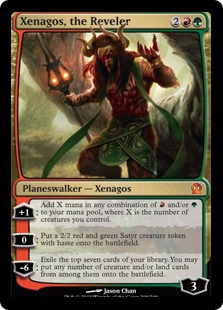 It's an interesting question, and one that has been kind of a hot topic recently: Could Xenagos be the next Jace?

There are certainly some similarities, though there are also some key difference. But both inhabit a similar space heading into their first Rotation, and that could mean big things for Xenagos since Jace hit $30 after Theros rotated in.

I've seen an interesting progression with people's thoughts on Jace. A year ago people didn't see much in him despite the fact he was all over the Block Pro Tour Top 8. I've always been a big believer in following Block results, and I advised getting in at the 8-10 the cheaper copies were at. As it worked out, the card ended up being played quite a bit immediately following Rotation, which caused a bit of a run on it and pushed the price to $25.

You can read the full article here.