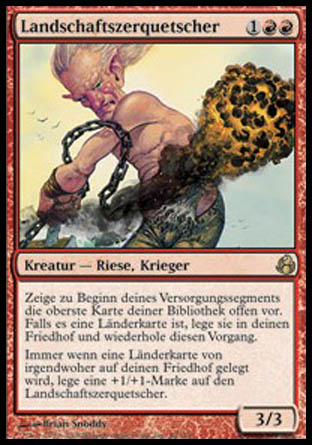 As editor for Brainstorm Brewery, I think a lot about Magic writing practices. Something I've been struggling with since I started that gig was whether we should write "fetch land" or "fetchland." For some reason I can't quite put my finger on, this term has been coming up a lot more frequently this week, so I decided to make my struggles public to get the community's opinion on the matter.

The German thing to do would be to just make it a compound noun and write "fetchland." The upside to doing this would be that it's very clear what you're referring to (at least to MTG players). There's nothing saying that MTG players can't create their own words, so even though you might not find it in the dictionary, using "fetchland" is probably a fine approach.

I don't hate "fetchland," and I could see myself accepting it as standard MTG lexicon at some point, but I tend to use "fetch land" because I have a certain desire for things to be consistent. If it's fetchland, then it should also be shockland, scryland, painland, checkland, and the aesthetically awful-looking and hard-to-read dualland. As much as fetchland might look okay, those others have varying levels of okayness, and I just can't get on board if we don't use the same logic consistently.

Another problem is that when I see these compound nouns ending in "-land," I tend to think of places like Oakland and Portland. We don't say "Oak Land" or "Port Land," we say "Oak-lind" and "Port-lind" (I mean, I guess that could vary depending on your local dialect). So when I'm reading quickly, I read fetchland as "fetch-lind," and it takes me that much longer to process what's actually being referred to.

I probably give this issue way more thought than it deserves, but that's the way I roll. I welcome all logical and compelling arguments to settle this question once and for all.

6 thoughts on “The Case for Germanizing Dual Land Nicknames”