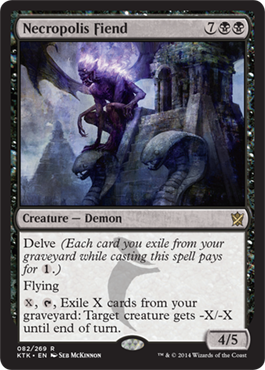 I have had a serious complaint about Prereleases the last few years. While the whole "pick a Guild and play a promo from it!" was truly awesome for Return to Ravnica, it felt a little odd that the trend continued past that. After all, it doesn't make a ton of sense where there's no Guild to choose from.

On the other hand, I do understand letting people play the colors they want. People did it anyway, so you may as well give them the cards so they can actually compete.

But there was a problem. A major one. People weren't picking a color based on their preference, they were picking based on what the most powerful promo card was. After I played against Black five times in a row at the Magic 2015 prerelease, it was clear we had a serious issue.

Luckily, it seems to be one they've fixed.

For the Khans events this weekend, you will receive one of up to 40 promos and be allowed to play with it. The catch is, you have no idea what it could be. Is it a perfect solution? I'm not sure about that, but sure does seem like a really solid step forward. And that is awesome. You can find out more about it here.

6 thoughts on “The Secret of the (Secret) Promos”