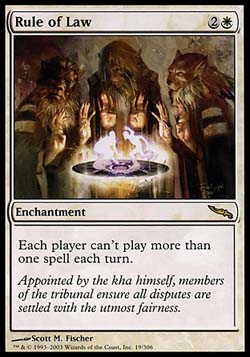 Deadspin recently fielded the question, "What If Baseball's Unwritten Rules Applied to Real Life?" Ever since, I've been considering this question with regards to Magic. We obviously have a complex comprehensive rulebook, but the rules of the game aren't what unwritten rules are all about. Like in baseball, unwritten rules dictate what is and is not acceptable social behavior during games of Magic. I've compiled an initial list of these rules below, but I encourage you to add more in the comments.

In a just MTG society, any player found taking one of these actions would be subject to having one of his rares defaced with a Sharpie:

This is hardly an exhaustive list, so like I said, feel free to add your own additions to the unwritten rules of Magic. Really, though, each of these boils down to one simple adage: don't be a dick.

17 thoughts on “The Unwritten Rules of Magic”