Did you know that PT Khans of Tarkir winner and Magic Pro Ari Lax was LITERALLY THE WORST HUMAN BEING TO SHUFFLE AND MULLIGAN?

It's true. Ari Lax won the Pro Tour, but he got there by trampling on the hopes and dreams of his opponents on the way.

Did you happen to catch this disgusting display of bad sportsmanship?

For those people at work, I'll give you notes.

Clearly Ari is the worst sport of all time.

I got the video clip from this tweet by Chris Pikula, a respected member of the community. A lot of people seem to be somehow disappointed in Ari and acting like Ari actively disrespected his opponent. For a bit of context, this is Ari's first Pro Tour Top 8. (Edit: the video isn't from the Top 8, it was from round 10. It's important to note it was his first Top 8 to frame how he was treated after he won, but it doesn't change the fact that when this was shot, he didn't know he would Top 8 or win). It also seems like a great deal of the expressions of disappointment at Ari's displays of emotion were retroactive upon him winning the event.

The entire tempest in a teacup has led to a lot of hyperbole and a lot of strong emotions on both sides of the debate. If you can't tell, I'm pretty squarely in Ari's camp and I'm not the only one. 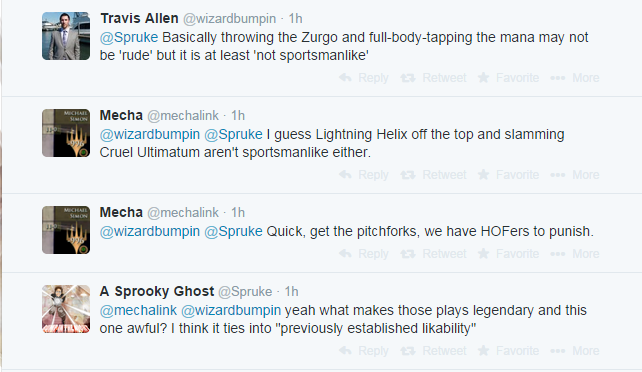 Is Spruke onto something? Is Ari genuinely a scumbag or would we treat this incident like Craig Jones' Lightning Helix if we knew more about who Ari was?

What we could do is ask someone who has known Ari for years and grew up playing in the same area.

Q: Thanks for joining us, Jason.

A: No problem, glad to be finally interviewed by myself.

Q: So let's get down to it. Is Ari Lax a disrespectful dick?

A: OK, here's the deal. Ari is neither super likeable nor super unlikeable. Ari's not Reid Duke - he's not going to stop on his way to a photoshoot with his trophy to help some randos pushstart their car and have that be the story of the entire tournament, but he's not a cheater and he didn't start all the drama that is surrounding him. He's just a good Magic player who has been groomed from an early age by guys like Pat Chapin and Mark Heberholtz on Team RIW. If he seems arrogant it's because most Magic players seem arrogant.

I've lost plenty of matches against Ari over the years and if this were an actual incident worth caring about, I'd be the first one to condemn him. This is a non-issue and all of the reports about his "disappointing conduct" seem rooted in jealousy and a general dislike for him as a person more than actual condemnation of his behavior.

Q: Well, couldn't it be said you're just an Ari Lax sycophant who is sticking up for him because you like him so much?

A: The last time I saw Ari Lax was at a pub two blocks from GP Worcester. Ari wasn't playing the event and neither was I. It was Sunday morning and Slick Jagger, Time Elemental and I were nursing hangovers with pancakes and Bloody Marys. Ari walked in with two friends, I turned around to see who came in and waved when I saw it was him. He made eye contact with me, saw I was waving, and didn't acknowledge me. So, no, I'm not sticking up for him because I like him.

Nothing Ari did at the PT, whether it was narrating his opponents' turns, having friends scout opponents' decks so he knew their outs or even slamming a game-winning topdeck was really poor enough sportsmanship that we wouldn't chalk it up to the general course of Magic for any other player if we happened to like that person better. Were the roles reversed, I'm not sure I could see Ari Lax tweeting that Chris Pikula slamming a game-winner was "not cool at all" or anyone else saying it for that matter. It was the result of a lot of emotion surrounding a tense, important final game in a pivotal match that he had won for turns and turns but couldn't find a source of white.

He's not a poor ambassador to the game, he didn't disrespect Watanabe or anyone else over the weekend and this entire issue seems sad and unfortunate considering other PT winners get to bask in the glory of their achievements and don't have to deal with a wave of negativity in the wake of what should be the best weekend of their life. If you personally dislike Ari, fine, whatever. But let's not pretend how much someone dislikes him means he's a poor sport.