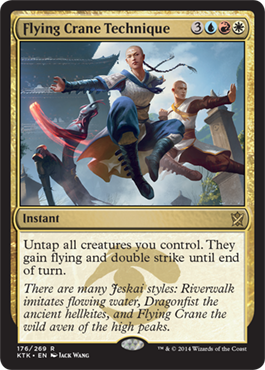 MTG Goldfish is one of my favorite Magic-related sites, and for good reason. The historical financial data is incredibly useful for making decisions as a financier, but the site can help one learn to play better as well.

Every Draft format, MTGG analyzes all MTGO draft replays available and posts the hard data that results. As of October 22, the site had analyzed 49,554 games of Khans of Tarkir Limited, the results of which can be found here.

There are some limitations to what this analysis can do. Because replays don't show cards in hand, the number crunching only accounts for cards that actually played in the game. There was a point in Theros where the top card was Ashen Rider. In my 100 drafts of the format, I don't believe I ever saw that card cast—it's just that in the games where it was cast, its controller generally did not lose. 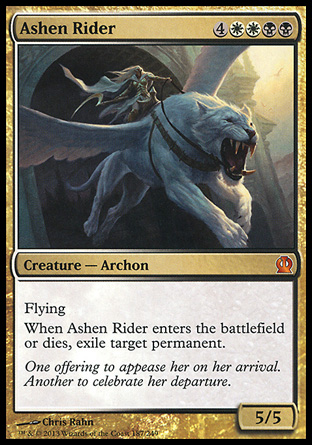 With that in mind, you can see why Flying Crane Technique is ranked as the best card in Khans. This card is generally going to either be a blowout or not be cast at all, and that's why it has an 80-percent win percentage in games where it was actually cast.

There's a good chance, then, that Flying Crane Technique is not in fact the best card in the set, but this data is still instructive in that it tells us that if we build our deck to maximize this card, it's extremely powerful and usual game-winning.

My biggest takeaway from this data is that this format is really slow, with games lasting an average of 9.8 turns per game. All the high-toughness creatures lead to epic board stalls, and it can be hard to break through for wins. 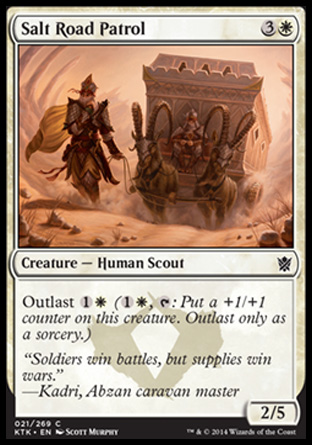 The other interesting part here is that according to this analysis, blue is slightly underpowered compared to the other colors. This is in stark contrast to Frank Karsten's KTK pick order posted last week, in which he declared blue the best color in the format. (Despite the discrepancy, or maybe because of it, it's a really good read. Check it out.)

I always enjoy this analysis from MTG Goldfish. I love the fact that the site is such a great tool for the MTG financier but that it also offers hard format analysis that can really help inform sideboarding or drafting decisions. If you want to level up your trading or playskill, this site is a great resource to have in your arsenal.