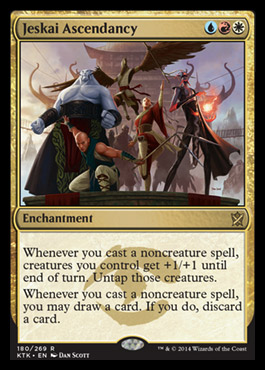 This thing started off as a bulk rare. Soon, there were whispers of it maybe being playable. Then there were rumors it could actually be good in Standard. Next, it did well at Opens that had people talking about it for real. Soon, there were shouts of it being Modern-playable.

Now the question is finally being asked: Will Jeskai Ascendancy be banned?

This seems to be the real deal in both Standard and Modern. Example Standard lists like this one have been holding up well, and I wouldn't be surprised to see them show up at the Pro Tour next week.

But it's one thing to be good in Standard. It's another to go 16-0 in games played in Modern on MTGO, as Sam Pardee did this week.

Will it be banned? I think we're a long way from that. But Pardee pulled off a Turn 2 kill in those games, and won eight of them on Turn 3. That's pretty astounding, and far faster and more consistent than Wizards is comfortable with, I'm sure. Personally, I think if anything goes it will be Glittering Wish. Not only does it make this particular deck way better, it makes every future combo deck similar to this one better. Is Ascendancy really that bad if you only have four copies of Ascendancy in your deck? It's still good I'm sure, but it's far less consistent than the current version with Wish that gets to effectively run seven copies.

In the end, the question that remains is whether or not the metagame can adapt to handle the deck, or if it really is too absurd to exist.

I don't know the answer to that question. What do you think?

3 thoughts on “Will Jeskai Ascendancy be Banned?”