Well, the entire lists were spoiled this weekend and the rest of the new cards have trickled in. I want to talk about the impact of reprints, but I think I will leave that to my article on the premium side coming out Tuesday. Let's address the rest of the new stuff here, shall we?

This card is potentially very punishing, and I love the way it scales. Not only does it scale off of the number of opponents who have a lot of options, it scales off the total number of players in the game. This isn't great in a 1v1 game, but start adding butts to seats and this could be very formidable. Even 1 wolf a turn for 4 mana is non-trivial, so getting 2 or 3 will be very potent and this card could get out of control quickly.

That said, again, I don't know if this can ever break the $5 mark. It's been a wild ride, having my enthusiasm for sick EDH goodies tempered by my financial pragmatism. I realize that has a tendency to make these articles seem a bit schizophrenic, but I think that speaks more to the accessibility of EDH as a format financially. There will be opportunities, but it will be tough to ferret them out. Luckily, I'm on the case. 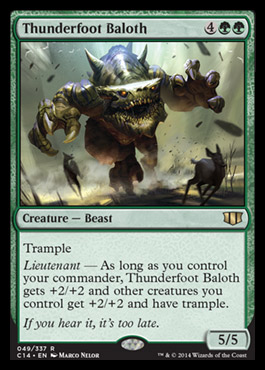 This card is the best lieutenant and it's not even close. It's hard to overstate how good this effect is. You're getting a 66% effective Overrun if you control this guy and your commander. While this is not as good as Craterhoof Behemoth and won't be the same price, I expect this to impact the format quite a bit. Not every green deck can use this, but many of them can and this is a great finisher. I'm a little baffled that the best color in EDH got the best lieutenant by a longshot but I won't complain too much since the red deck is super stacked and easily the deck to buy. This card is very exciting, and I could see it cross the $5 barrier. I think Primal Vigor may be a good analog price-wise, although Vigor's attenuation is a unique case and I can see this card retaining value better. This card is very, very good. Green decks play Bellowing Tanglewurm, guys. They will love to jam this.

Song of the Dryads 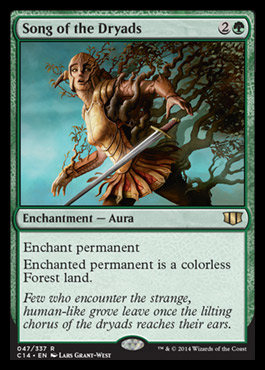 Wow, green's answer to Oblation? This card is a much, much better Lignify and I expect it to get played accordingly. The green deck doesn't have any big, obvious cards at rare, but all of its rares are really adding up to flirt with the $3-$5 mark and that could cumulatively make the deck a surprising font of value but one that flies under the radar and accordingly helps the cards retain their value a bit better. I think this is pure, solid, Desert Twister-caliber removal in a color that rarely gets it so cheap. This is practically a Path to Exile for green (as close as they'll allow). I like it a lot. 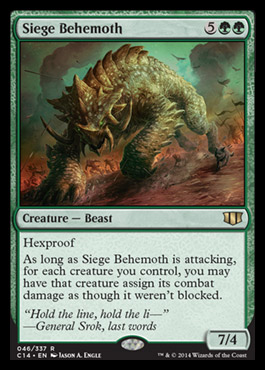 This card says MAY? It says EACH CREATURE YOU CONTROL? This is a lot of fun, and it's going to really frustrate opponents. This guy only knows how to do one thing, and that is smash faces. This is better than a card that makes creatures unblockable in most combat scenarios for green. You just hit their face, but you don't have to. That flexibility makes this card very exciting. I don't know if this ends up an exciting bulk rare like Boros Battleshaper which is equally insane or if it will end up a few bucks. I do know that I wish I could have a foil version of this card. 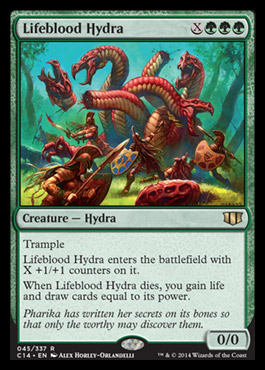 As a Vorel player, I always want more hydras, but I am swapping them out and putting new ones in as fast as they print them. I have enough damn hydras to play hydra tribal at this point, and it's a little silly. But can you not play this? No, you absolutely can't not play this. This card is easily my favorite card in the green EDH deck and they farted it out with a bunch of other cards and this has gone unnoticed to a degree. Some day when I get a card to spoil exclusively, I want it to be Lifeblood Hydra good. This creature is stupid good. It's a bit narrow since not every green deck can use it as effectively as Vorel, but I think its sheer power will broaden its application base a bit once people see how good it is. For all intents and purposes, this card is mythic rare and I think it is mythic rare good. I am really liking these creatures that give you a ton of value when they die. I may have to put a copy of Greater Good in my damn Vorel deck, now. Could Momentous Fall see some play finally with Hooded Hydra and Reef Worm and Chasm Skulker running around? Maybe, maybe not. Stranger things have happened.

Could this card see play in enough decks to break $5? It's very possible. This card is scary good, though.

This card does WERK. 5 mana is a lot, but colluding with an opponent to clear the board seems good. Unlike other offerings, this is strictly a card that lets you and an opponent or two make some decisions about the board. Unlike the black offering which has you pick an opponent and they sac a dude but get a benefit from it, you pick someone here who will hopefully make the right choice and hurt someone with an annoying land, annoying creature or both. You can even pick the guy who lost his land to get retribution and blow up a creature from the person who wronged him. This card is the most dynamic offering card I have seen, It's going to be bulk given how popular the red deck will be, but this card is fun and I hope it picks up later. 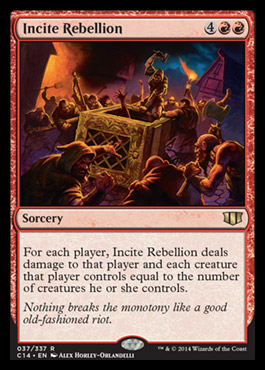 This card is Insurrection good. This is a card that ends games. You can play around this knowing it's coming and make sure you don't get hit as hard. Your opponents won't be so lucky. This card is a really cool design but, again, I think the red deck will likely be overbought and that will severely dampen the upside of non-marquee cards. 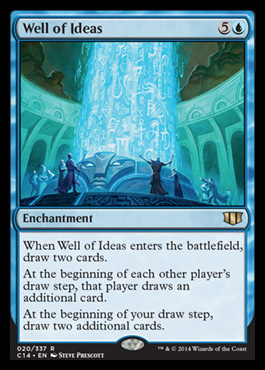 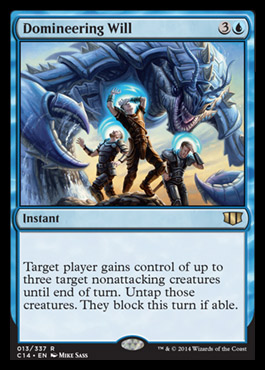 This is a circuitous way to remove creatures from the battlefield, but this has a ton of uses. You can make a player who is getting attacked get some blockers, whether he wants them or not. You can get some of an opponent's creatures to block with. You can throw off combat math and kill utility creatures and steal dudes to attack with pre-combat. This card is the most utilitarian Ray of Command variant ever. It's very, very good. This will cause a lot of headaches and do a ton of work. The blue deck looks so weak financially this may even retain some value. I can't wait to ruin lives with this. 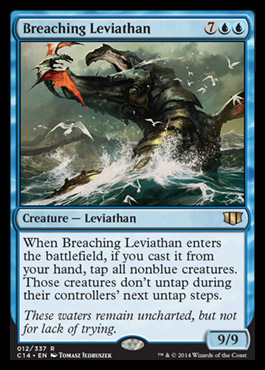 Yep. This is a card. It's a 9 mana card that doesn't let you cheat it into play or flicker it with Deadeye Navigator but will reward you for casting it. Unfortunately, blue has the hardest time benefiting from your opponents' pants being pulled down like this and while everyone's creatures are tapped, you still only get one attack phase per turn. If you're taking extra turns, this is nutty. If you're playing 9 mana dudes from your hand and taking extra turns, you've won already. This is likely a sub-$3 card.

This card is just bonkers. A big Fireball, an alpha strike, maybe a big Incite Rebellion; all of it is getting winged back with a vengeance. Someone online said this card could be used to stop Storm decks. I guess, if Legacy storm were really a thing and killed you with Grapeshot. More likely you're going to stuff someone for getting another cheesy "Hey, I drew Craterhoof Behemoth, guess I win" draw. I like stuffing those players. The art is sweet, this card does SERIOUS work and I like it. I think it could flirt with $5 but we have to wait to see how the decks sell. 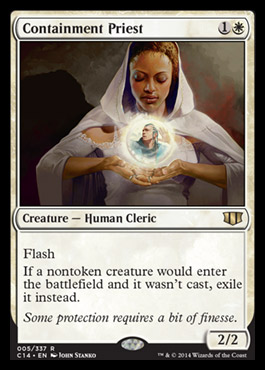 Wow. This card is seriously nuts. It's Legacy playable if the interwebs are to be believed. Mostly this just shuts down a lot of unfair strategies. The list of its victims is a long and bloody one. Deadeye Navigator. Elvish Piper. Quicksilver Amulet. Roon. The entire black precon. This card is potentially the value card of the set, although Dualcaster Mage will fight it to the death for that title. Are we at a critical mass for hate bears where we have too many for too few spots? I don't know, but I do know that Sneak and Show will struggle with this card and have to use its resources killing this, which can buy you time. I don't know if this sees play in Legacy, but this solves so many problems in EDH that the whiners wanted to solve with bans that this has to see play. I don't play much white, but I might start. If this hits $15 I will be tickled and a little surprised, but stranger things have happened.

Deploy to the Front 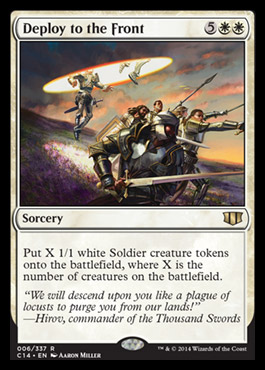 This card is better than anyone realizes. Will it be worth any money? I am not sure. I am inclined to say the sheer raw power of this card will make a lot of people include it in decks. Cathar's Crusade is in this color. Just sayin'. Token-based deck users are salivating right now. This card needs to cost 7 because in a deck with a general like Trostani, this could make the game unwinnable for your opponents. If you Craterhoof after this, you could easily do damage in the tens of thousands starting out with a very modest board.