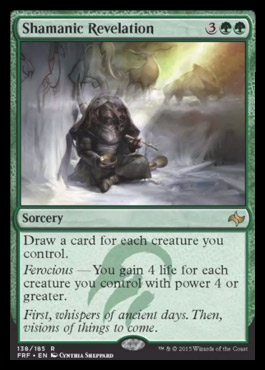 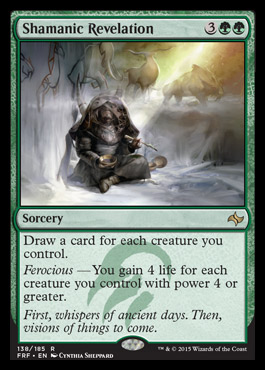 I saw someone make a post in my local Facebook Magic group that said “Better thanTreasure Cruise? I think so!” which made me facepalm so hard that it’s been almost 24 hours and I still can’t get over it. We shouldn’t be asking “Is this better than Treasure Cruise, a card that has fundamentally impacted Modern to such an extent that an emergency ban was requested by a significant portion of the Modern-playing population?” we should be asking “Is this card better than Harmonize?”, a question to which the answer is “No, Harmonize is a better card than this is.”

That isn’t to say this card is without merit entirely. I just don’t think anyone has done a good job of evaluating this card. This is a win-more most of the time, and win-more cards are generally bad. It costs too much mana to compete with Glimpse of Nature for example. Elves doesn’t need a non-creature Regal Force. This is going to take the spot of Collective Unconcious in a few EDH decks. This looks better than it is to Timmies  and worse than it is to Spikes. EDH players are the only pragmatists and they are sort of “meh” about it, which seems about right. Momentous Fall was highly touted when it was first spoiled, and that had the benefit of having good sac targets in the form ofVengevine and Abyssal Persecutor. I have spent too much time on a likely bulk rare already.