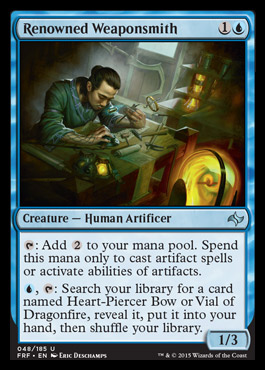 I was pretty sure a card called “Vial of Dragonfire” would be in the set, and I’m puzzled that it’s not. Heart-Piercer Bow is an uncommon from Khans of Tarkir, putting your chance of getting these two cards together in Limited somewhere between “diddly” and “nevar”. This card still has some potential if you’re trying to jam out artifacts, and maybe he’d be a cool pauper EDH general (that can’t play the Bow ><) or something, but we can’t rule this guy out entirely until we see what Vial of Dragonfire does. Expect this to be worthless before the last set comes out, giving you an opportunity to speculate. I probably won’t do it, but there is a non-zero chance there is money there. Personally, I wish this were another situation like we had in Scars Limited where you could cast Trinket Mage for Darksteel Axe.