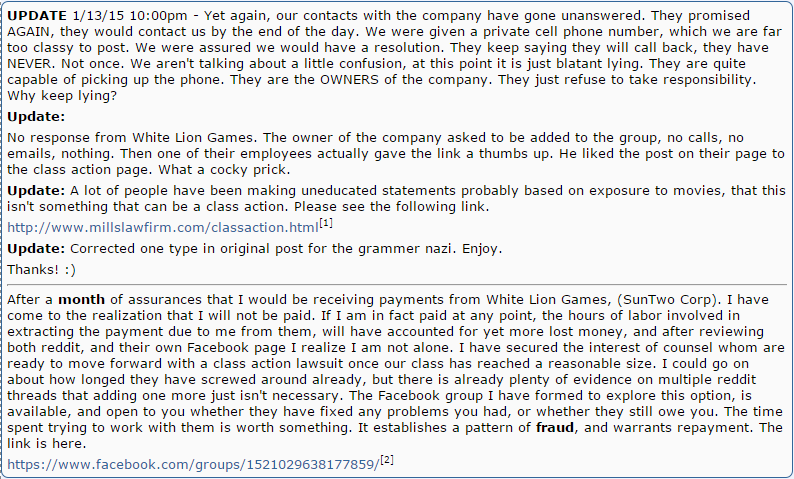 It looks like someone has had enough of White Lion and their policy of slow payment for buylist orders and glacial shipping on ordered cards. The Quiet Speculation forums are full of stories from dissatisfied customers and it's common knowledge among Quiet Speculation Insiders that White Lion is a great buylist to use if you hate money. My own experience the last time I shipped to them in 2013 was sending them a $500ish order that included Scavenging Ooze in early May. 3 weeks later, Scavenging Ooze was revealed as the PS3 promo card from Duels of the Planeswalkers. a week and a half after that, they submitted me an offer on my buylist order that was offering substantially less for my order because Scavenging Ooze was getting reprinted. If I hadn't had access to the owner's personal cell phone number and contacted them every day for a week, I imagine my options would be to get my Oozes back, a month later now that they were worth substantially less, or to take the lower offer. No thanks.

Despite our small corner of the internet being savvy to their terrible practices, it's not obvious to the rest of the internet. I shipped to White Lion because before Trader Tools was completed, I used bidwicket and White Lion often had the highest offer for cards on bidwicket. Well, yeah - it's pretty easy to make the highest offer if you have no intention of ever paying. Apparently White Lion stiffed the wrong guy, because he's pretty mad.

Start at the bottom and read the updates vertically. This guy is so mad at White Lion he can't even compose his reddit post in a logical, readable manner. I wouldn't want to be White Lion right now!

You can read the entire (honestly hilarious) thread on reddit right now. You will learn more about White Lion's practices and find out that a much greater percentage of the readers of /r/magictcg than you may have expected apparently went to Law School. Enjoy!

If this suit actually goes forward and you think you may have standing to join the class, I will update everyone.

Fortunately, White Lion is a bit of an outlier in our industry. There are plenty of reputable dealers who process orders efficiently, pay quickly, grade charitably and send out orders in time for next week's FNM. Hopefully after this incident, White Lion either cleans up their act or gets out of the business.

*If the title didn't make sense to you, it refers to an earlier article I wrote about the incident where I said "I won't say the name of the store" and Doug Linn said "Does it rhyme with 'Slight Cryin?"

One thought on “Slight Cryin’ in Hot Water”