This set really sucks, doesn't it? But it doesn't just suck for competitive players, who will say "They pandered to casuals way too much with this set", it sucks for the casuals being pandered to, as well. Don't believe me? You gotta ask yourself one question.

So the set is lousy with dargons. The block is, frankly. Being lousy with dragons should be cool, but there's a problem. It's lousy with lousy dragons. To understand why this is a problem, let's look at something that is not dragons and illustrate what we mean.

Dragons Are the New Hydras

And hydras used to be big business. Hydras are big, scary, flavorful and you can pump a ton of mana into them and get there. In general, if you let casual players make something bigger the more mana they pump into it, they're going to be all about it. It is a big, awesome creature but it's also a fireball with feet.

As more and more casual people got into Magic, casual durdly stuff was bought up. Dragons, angels, demons, thallids and yes, hydras. Hydras that aren't that great are worth serious money.

This hydra gets big, but it's not super great. Still, the card appeals to casual players, and make no mistake - EDH is not propping this card up as much as casual demand is. Hydras are nearly exclusively the purview of Vorel of the Hull Clade and Vorel don't truck with no red pips. Sure, some EDH decks like a beater like this, but most of its demand, which materialized in the last few years, is fueled by casual demand.

Hydras are big business. This one is solid, it's in Mana Flare colors, it has removal built in and it is a mythic from the first block where mythics were even a thing. Not only that, its interaction with Doubling Season is amazing due to its unique wording. Who are these casuals playing $9 hydras with $20 enchantments? They're very real and I love to trade cards with them.

So why aren't we seeing hydras that will be $10 cards in every set? One reason is that Apocalypse Hydra took five years to go up in price, so if there were a $10 hydra in Theros block, we're not going to know for a long time. Another reason? Hydras aren't special anymore.

There are so damn many hydras lately. Let's play a game called "How many hydras were in this block". Ready?

OK, so not really, but since Shards block, we've gotten 18 hydras, which is more than half of the hydras ever. That's so many. That's too many. They're just not that special anymore. What does this mean in practical terms? 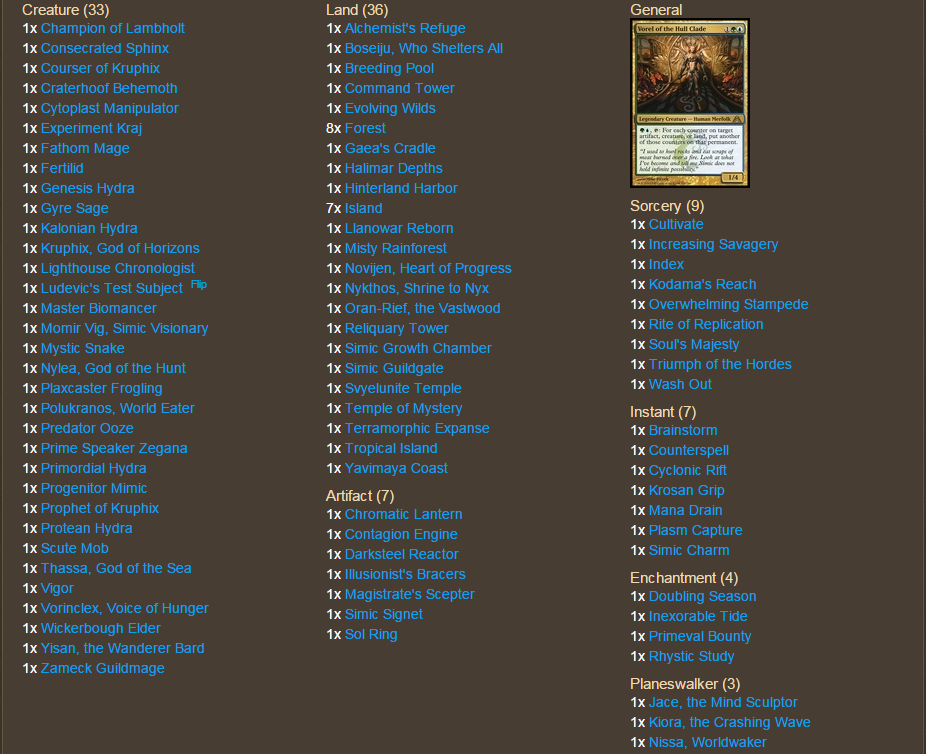 Hydras started out as red cards because, whatever. They spit fire or some crap so that made them red? I don't know. They started making them green. That's fine. But what does this mean for EDH players who want to use the unfairness of cards like Kalonian Hydra to get there? There are a total of 29 cards that show up in gatherer when you search for "hydra" as the creature type. Do all 29 go in a Vorel deck? Nope. Count.

This deck was called "Vorel and his Hydra Buddies" on TappedOut. So why are there only five hydras if this is a hydra deck? And if you think this is because it's a durdle deck, I run exactly one more hydra in my Vorel deck, probably because this list predates the printing of Lifeblood Hydra. Have you read that card?

The ratio of how good this is to how much it costs is non-correct right now. Being mass printed in a Commander deck hurts its upside, but not forever.

But does this mean that Lifeblood Hydra has upside in a few years? Is it more likely that the price isn't limited by the number of copies in the Commander decks but rather by the number of other hydras? While Primal Vigor is competing with a few other cards like Doubling Season and Parallel Lives, Lifeblood Hydra has to compete with all hydras, past, present and future, for 5-6 spots. Are there just too many hydras? 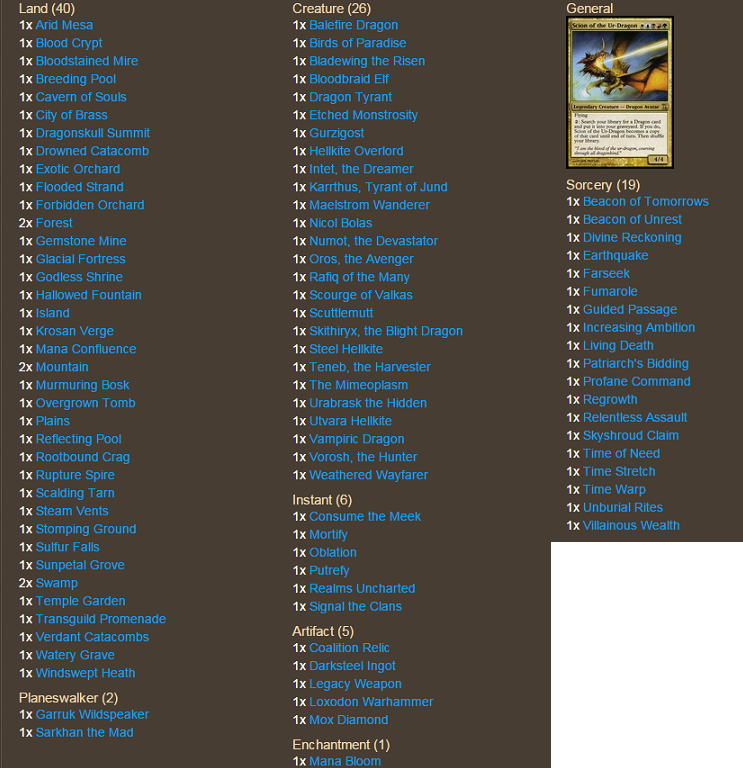 How many dargons get run in this dragon-heavy deck? Let's count.

This deck runs 16 dragons. There are 154 dragons ever.

Now, this deck is roughly typical but you can find some Scion builds running as many as 25 dragons. 25 dragons out of 154 ever.

So what does it mean for a new dragon that comes along? Do we evaluate the dragon on its merits to see what kind of value it's going to hold? Well, not necessarily. There are really going to be two classifications of dragons, angels, demons, etc going forward. Let's look at both.

These cards will impact stuff NOW. This is most likely because they are good in Standard, sometimes only in Standard. The price profiles of those cards have a very predictable shape.

Price memory will make this a bit sticky, but look where its price is headed. It peaked within a year of its release. As far as dragons go, this is pretty weak. Was it nutty in Standard where the skies were cluttered with Lingering Souls tokens? Yup. But that means that we were in a position to make money buying early.

I bought these at about $15 (I'm a lucksack, not a genius--I saw some tweets about the Japanese being on it and bought in with trade-in bonus at a GP) and sold under $40. I also never bought back in. These definitely haven't hit their floor yet. But how can that be? Dragons are great with casuals, aren't they?

Is this one of the best six hydras ever? No, and its brief window of applicability in Standard bears this out. A hydra tribal deck could conceivably be a thing with Ulasht, the Hate Seed, but is that likely? That isn't going to make better use of hydras than Vorel, which is the gold standard hydra deck.

What we have here is a card that spikey people at first dismissed as "EDH fodder" but rediscovered later when blue was running roughshod. Later on, there was no sustained demand for the card and we see the value trail off. You gotta be pretty good to make the hydras roster and this isn't.

Despite being the best hydra ever printed, this still hasn't ticked back up. If it hadn't been so impactful in Standard, this would have sat at a few bucks and creeped up. Ironically, its impact in Standard kept this concentrated in the hands of players.

When a card does nothing, it sits in bulk boxes, gets spread out over collections and casual decks and is tougher to track down. When casual cards spike later, it takes a while for copies to come out of the woodwork, but a high impact early means the cards don't get a chance to end up spread to the four winds.

This has upside at its current price. In a year or two, I expect this to double, but you don't want to be the guy coming off of these now.

I marked the date of this card's reprinting in Conspiracy on the graph. Had this not experienced that reprinting, it might have creeped up even more.

This is a very good hydra and it's designed to do work in EDH. It has multiplayer-specific wording after all. Originally in the Mirror Mastery deck which no one was excited about, this ticked up as EDH players realized how good it was.

Lifeblood Hydra has a lot of the same characteristics, and I feel like we could see similar upside. More Commander 2014 was printed than was Commander 2011, but even if we don't see the same peak amplitude, I expect a similar peak shape. Who knows how Omnivore would have grown if not for the reprinting?

This should never have hit bulk mythic status. EDH was a real thing by the time this set was played and people should have known better. The thing is, no one cared. This doesn't need to go in dragon decks--it steals their damn mana rocks and Perilous Vaults and Sword of Fire and Ice and Vedalken Shackles and stuff like that. It's a win condition in a Daretti deck.

This is expensive because it's good but it got cheap because it's a dragon. With renewed attention paid to dragons, people grabbed these to go in EDH decks and the foil corrected from a 2x to a 4x multiplier. You had over a year to buy these for nothing. Even good dragons go to poop if they aren't good in Standard, and remember that next time you are tempted to buy cards at presale because of EDH. This halved before it tripled.

Don't lie; you had no idea this card was expensive. Well, it is. It wasn't just the announcement of dragons coming in Tarkir, either, this was a steady gainer that just tunes people up. It's one of the 20 best dragons ever printed and it knocked some dragons down a few pegs to claim its spot on the roster. It knocked a decent dragon off of the list.

And people groaned when they opened this soon-to-be-$10-bill in their boosters. "Awww man! I wanted a Champion of the Parish, not this bull$#%^" you said, throwing the card into a pile of trash like Parallel Lives (now $5). This took a few years, but it got there. Why? It's a good dragon and no one cared at first.

Are there any dragons that are destined to hit bulk status and will be good pickups later? There are a few dragon that remind me a bit of Balefire Dragon but while I am sure a few will be obvious in hindsight, nothing sticks way out. I think Dragonlord Atarka will be closer to Kalonian Hydra than Hydra Omnivore.

Is there anything I like right now? I won't say, but I'll give you a hint.

12 thoughts on “Insider: Drag of Tarkir”