The goal of this article is to review the annual reports that Hasbro and WoTC puts out and isolate relevant information that could have an impact on MTG finance. Unfortunately, WoTC is a small part of the Hasbro empire, so financial information on WoTC is typically buried deep in the Hasbro annual reports, which you can find here.

Hasbro bought WoTC September 30, 1999, so the annual reports are likely only going to contain Magic data starting in 2010. I will post the data I've found by year below (along with any additional sources) and then we'll delve into the data (I will highlight playerbase related data in green and financial data in red).

Why Bother to Analyze Annual Reports?

This is a valid question. Like all businesses, you can learn a lot by following the money (and the playerbase growth).

If we assume that Magic: the Gathering print runs are correlated with the playerbase and sales (it seems a smart business like Hasbro/WoTC would do this), then we can also get an idea of which print runs might be smaller (as it makes no sense for a business to print the same number of cards when sales of said cards are down then when sales are up). We aren't likely to come up with a quantitative data set, but we can at least get an idea of likely trends.

Now for the good stuff.

Looking at the Financial Side of Things

Below is a bar graph showing the years MTG had positive growth and the years it had negative growth. (Note the years are abbreviated to just the tens digit, so 1 is 2001, and so on.) 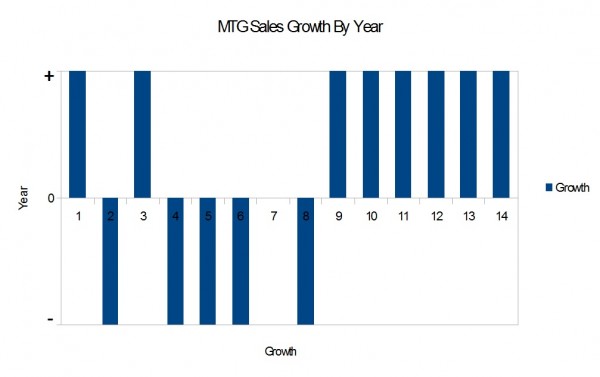 Looking at this growth chart we can now isolate the good years from the bad and more importantly we can determine which sets came out on good years vs. bad years.

If our original assumption is correct, then there are likely fewer cards from bad years than good years (as players didn't buy as much product.) So a card from a bad year that shows sudden demand might hold more potential as a spec. At the same time it's also important to keep in mind that the playerbase growth also likely affects the print run size.

The bad years are highlighted in red above. It's important to note that both 2002 and 2004 were bad years, but they also only had three sets releases (which may be a contributing factor). It's not surprising to see 2004 was bad though, given the fact that Mirrodin block, and specifically the affinity mechanic, pushed a lot of players away from the game.

2005 followed it up with a much weaker Kamigawa block (to tone down Standard) which didn't seem to go over so well with the playerbase. What is surprising was that 2006 with the Ravnica block (which is often hailed by many players as one of the funnest blocks in Magic's history) was still a down year for the game, though this could be due to the fact that the Kamigawa block was weak enough that it didn't stop hurting the game until after it rotated out (this also would explain why 2007 was a good year).

Again for 2008, it's not surprising it was a bad year, as the Faerie menace was running amok in Standard--I remember a lot of local players talking about boycotting Standard until it rotated out.

As you can see from the chart, since 2008 Magic has had all positive revenue growth, which is a great sign.

Unfortunately, we get a lot less information when it comes to the Magic playerbase from Hasbro or WoTC. What we do have is a meager chart that looks like this (note for 2012, I added the registered and active player numbers listed on the annual report): 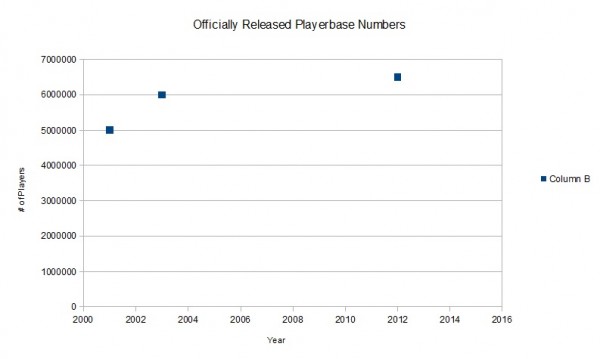 However, from other sources we get additional numbers to help fill in the gaps. Note the difference in the numbers for 2012. 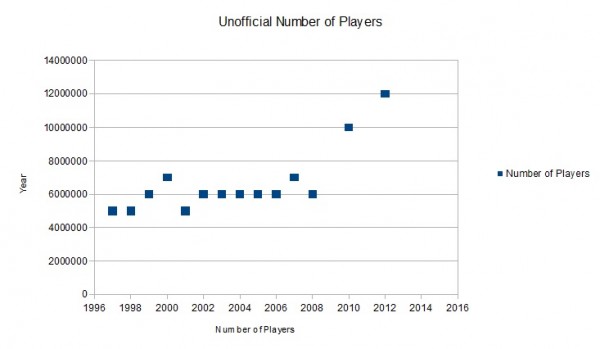 From these charts we get a slightly different picture compared to our sales chart. Going by playerbase alone it would appear that 2001 and 2008 were bad years and everything in between was either positive or stayed the same.

What we can pull from the playerbase growth chart is that if the unofficial one is accurate than rares before 2010 are likely at least twice as rare as ones post-2012. This implies that any demand increases from these years will likely cause a higher price increase than the same demand from a post-2012 set.

Mythics are another interesting factor to consider. They didn't appear before 2008 (specifically Shards of Alara), but given the playerbase started to really explode post-2008, the fact that mythics were eight times rarer than regular rares would imply they're much rarer than even post-2008 rares. While the playerbase doubled in size, the rarity of these specific cards octupled. However, that is still based on our earlier assumption that the playerbase size directly impacts the print run size set by WoTC.

Because of the turning point in 2008 (when we saw both mythics appear and a rapid expansion of the playerbase), looking at the early mythics for financial opportunities doesn't seem like a bad idea.

Below is a list of those mythics, with the single-print ones in bold. Many of them already sit at a decent price, but there are some which are still decently cheap.