Welcome back, readers! I realize this week is typically an MTG Stockwatch week and while I still have every intention of continuing that series, I thought that analyzing some buyouts might prove really useful, especially with quite a few having occurred relatively recently.

Buyout - an investment transaction by which the ownership equity of a company, or a majority share of the stock of the company is acquired.

Okay, so technically that's not the ideal definition for what's happening with certain Magic cards, given that no one person can likely purchase the actual majority of the total stock of a given card (given the massive print runs of every set from Revised onward).

WoTC disclosed the print runs of earlier sets. There were 289,000 of every Revised rare printed (so there are almost 300k of each Revised dual land). Granted some of those have likely been destroyed, lost, or forgotten about--but it's unlikely that even the largest MTG store has even 1% of any given rare, especially newer ones.

It's very likely that recent print runs (and probably some pretty old ones too) were far, far larger, as the player base has grown exponentially since the first few sets were printed.

For argument's sake, let's say print runs have only increased tenfold (I'd imagine this is an extremely conservative estimation). This would mean that there would be 2,890,000 of any given rare. So in order to get 0.1% of the total number in the market you'd need to purchase 2890 of any given rare. Unless you're collecting some oddball card, this is highly unlikely without an exceptional amount of effort and cost on your part.

But, someone can purchase all the "stock" available on the market, which typically is a much smaller amount. For example, if someone were to buyout Boon Satyr on TCG Player alone, they'd need to buy over 1000 copies. This does not include many major retailers who don't sell on TCG Player. However, if this same person instead wanted to purchase all the copies of Argothian Enchantress they'd only have to buy about 200 copies. So we can see that some cards are scarcer than others, and those are the ones that tend to get "bought out." Of course, the challenge is that rarer cards also tend to be more expensive and buying even 60 copies of a $20 card ties up a considerable amount of money.

Recently we've seen the following cards skyrocket in value (a few of many): 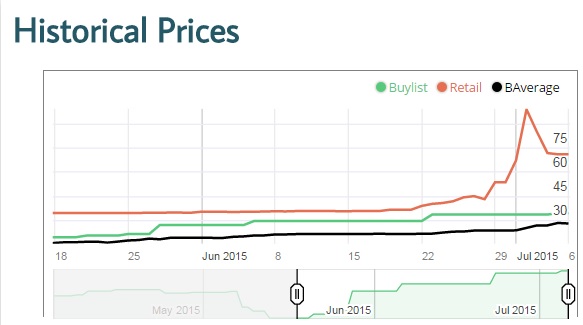 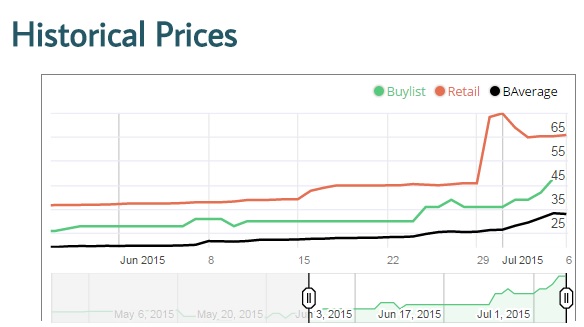 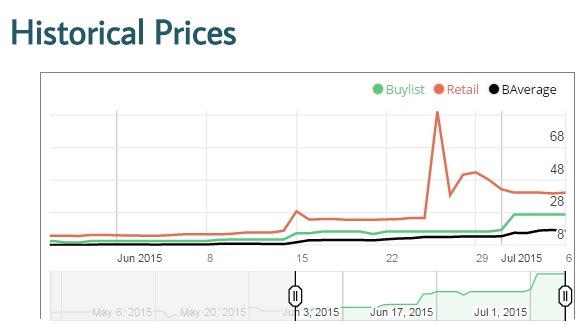 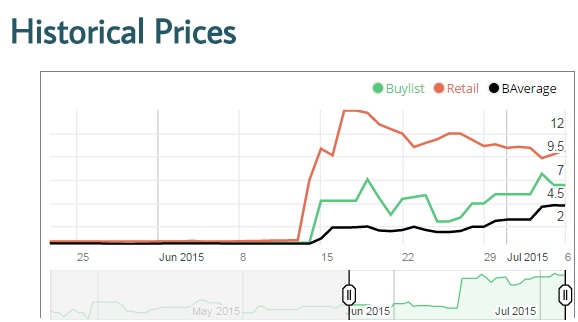 The biggest thing you'll notice is the sudden and sharp incline on the graphs. This is usually the strongest indicator of a buyout, as compared to something like Chromatic Lantern, which shows a nice gradual increase over time.

The other major differences you'll notice is that every card that spiked had an immediate drop from its high as retailers overpriced a card, noticed nobody was buying and then dropped the price back down. You'll also notice that the buylist prices of spiking cards is delayed by a little bit (sometimes as short as a day, other times by as much as a week). This is because the dealers know that spikes are often indicators of artificial demand.

Artificial Demand constitutes demand for something that, in the absence of exposure to the vehicle of creating demand, would not exist.

This basically means that dealers are cautious of raising their buy prices in the case of a suspected buyout. If one person was simply manipulating prices in order to sell cards back to dealers at a profit, the dealers could be left with a card that nobody else wants to pay the "new" price on.

Nourishing Shoal and Heritage Druid show the fastest buylist price increases above, as they (and Goryo's Vengeance) spiked because of GP Charlotte. We can also look at their current spreads as indicators of how confident dealers are in their current price sticking. Both have spreads in the 30% to 45% range. Compare that with Horizon Canopy which has a 51% spread, meaning that dealers are only willing to pay half of what they'd sell it for, indicating a lack of confidence in the new price (though Heritage Druid's 44% spread indicates they aren't too confident on that one either).

Below are the buylist options for Nourishing Shoal: 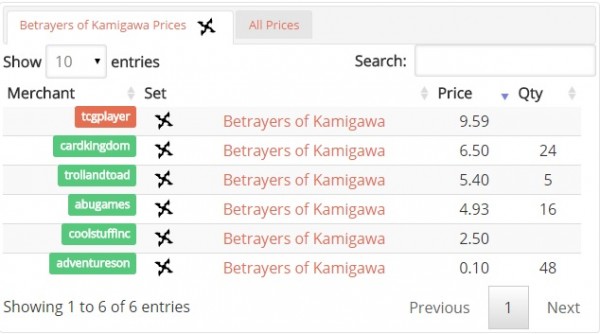 Let's look at another example. Here are the buylist options for Heritage Druid: 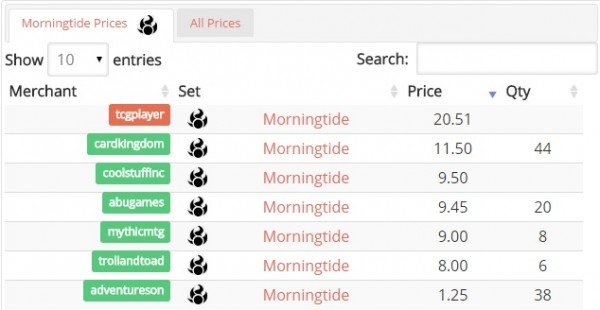 Looking at the retail/buylist chart on this card, any copies you purchased after May 18th (assuming retail prices) would have lost you money, despite the fact that the card almost doubled in value.

So if these spikes aren't that profitable by reselling to dealers, than one would have to find an alternate out. If we look at eBay listings for Heritage Druid and Nourishing Shoal we see them only really selling a good bit below the TCG average price. 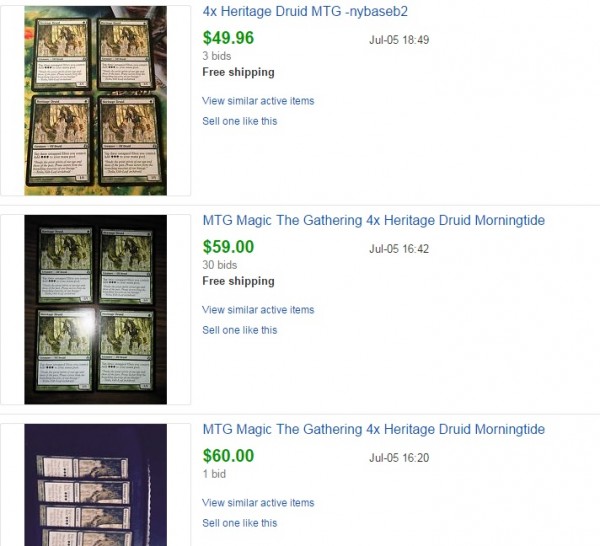 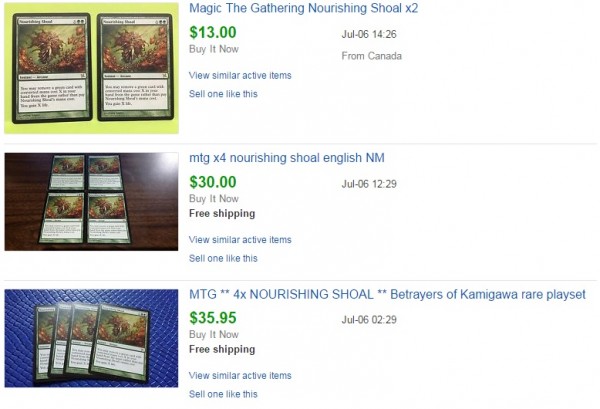 So with eBay sales only going for around 75% of the TCG Mid price and only a small number of sales per day (around 2-6), it would take a good bit of time to unload a large quantity, all the while the price was likely trending downward.

The other option is of course trading them off. I tried posting both in my "Haves" list on Pucatrade and got zero hits (although my trading is limited to the US). If that's not a reliable option, you're limited to trading them off locally or at major events. Your local trade base is likely limited in size and major events only occur on weekends, thus you're subject to a (likely) falling price as the week progresses.

The MTG finance realm is not regulated, and in some cases buyouts occur because some new combo or deck comes out that sparks interest. However, in many cases they are simply attempts by one or a few to manipulate the market--it turns out that is not actually a good investment strategy.