Welcome back, readers! Today's article was inspired by Mr. Gus Landt's post in the forums. He posted the question "What would you start doing now if you were going to open a brick-and-mortar store in two years?" Gus himself already has a store, but it's a great question to garner feedback on for many reasons.

The biggest reason is that many small business owners are pretty inexperienced running a business (this isn't relegated to Magic or any specific industry). I'll be upfront and state that I have no formal education or training in running a business, so I'm not the ideal source for that specific information; but knowing my limitations, I wouldn't try and start a business without additional outside knowledgeable assistance.

If we take a smaller sample than the entire earth's population (let's say your nearest cities population), we can assume that a similar percentage of said population might be interested in Magic. I currently live between two of the bigger cities in South Carolina and according to Wikipedia the entire county populations (for both cities) is 765,235. If we use our 0.16%, then we estimate there are around 1,224 potential players in the area (not bad really).

I've been to all of our stores and met a lot of different players, but nowhere near that many (which to me implies that WoTC's 12,000,000 may in fact include people who just buy a pack or two from Walmart once a month). But either way, at least we can get an idea of what kind of demand we can expect in our area.

This is a very simple concept, but one that I think a lot of people don't grasp clearly. The actual definition can be found here. But the basic idea is to figure out how much you need to sell to cover your expenses. It sounds simple enough, but what's critical is for you to figure out all your actual expenses. Here's a quick list of a few I can think of off the top of my head:

This list isn't likely all-inclusive (there are probably some expenses I didn't think of), but all of these things take away from your profit margin. 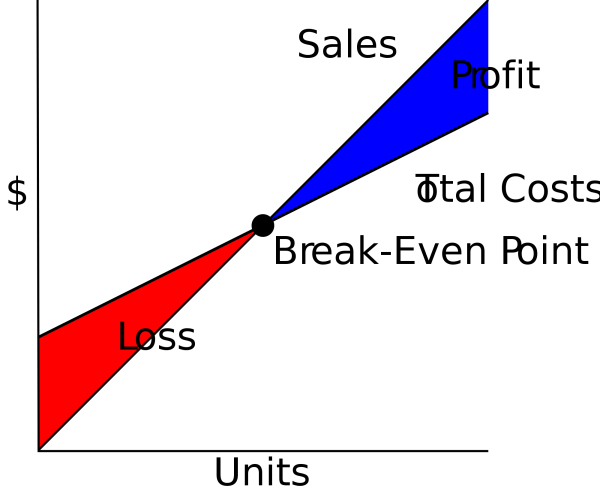 Thanks to the internet and its availability to most people (especially MTG players), MTG selling is quickly reaching a point of "perfect competition." I base this claim on the following:

That being said, as a brick-and-mortar store owner you have to accept that you are in fact competing with all the other stores/people who sell cards on the internet and in your local area. Thus you need to develop a pricing model conducive to this type of selling if you want to be successful. The good news is, this level of competition is limited to actual product sales. Another form of profit is tournament fees which have a much lower level of competition as tournaments aren't something one can currently "buy" online (at least not paper tournaments).

When it comes to local competition you'd ideally want to calculate the viability of adding another store to the local atmosphere with something like the Lotka-Volterra equation. This equation was created to model dynamic systems similar to how predators and prey interact in an environment. The equation is:

Dy/Dt represents the store growth rate, which may or may not be difficult to determine (obviously it's pretty easy to count the total number of stores, but if a competitor is doing really well their store might grow in ways other than "additional locations", such as increased hours of operation, increases in store size, or even just increase in singles selection).

The other major challenge comes from your other constants (α, β, γ, δ) which are real parameters that exist between the players and stores. These might include (but the list is certainly not all inclusive):

Unfortunately, there is no "right" answer to look for. One could simply judge the level of importance of the factors they want to look at and run the equations utilizing said factors and then comparing the outcomes. Doing this might help a potential store owner figure out what factors they need to focus on; however, even then I don't know if the answers will be definitive enough to be truly helpful (and not skewed by simple input bias).

The actual graph of these equations (with a predator-prey relationship) often looks something like this:

One thing I've seen a lot of stores do is diversify what they offer. Magic players often have plenty of other hobbies that game stores can access from their same distributors (board games, comic books, action figures, other card games, video games, graphic novels, etc). However, the best way to understand your customer's wants is to ask them (and gather data).

It would also be wise to gather sales data so you can analyze buyer trends. For example, you're most likely to have the most Standard sales before FNMs on Friday and the most EDH sales on EDH night. This seems obvious, but you might notice other trends; perhaps certain days of the week are barren, and these would be the best nights to offer other games or sponsor new or different formats (Tiny Leaders, Sheriff Commander, etc.)

What is most important to pull from all of this is that there is in fact a relationship, and areas can become "saturated" with stores. This will actually hurt all the stores simultaneously until some close and the proper balance of stores to players is reached.

This is why doing the break-even analysis is so important. If you can figure out how many players on average your store will need to see to cover your expenses you can evolve your store's operation to maximize your profits.

14 thoughts on “Insider: Opening Up a Store”