This week's article was inspired by a post by one of QS's members (John Galt) found here.

John started with this:

1. Wizards encourages people to play it, as it qualifies you to Pro Tours and it's also played in them.
2. Wizards reprints every card needed in that format. So the player base can keep growing, as the supply can increase as much as it's needed.
3. Stores also prefer that format over Legacy and Vintage. Decks change more often, and therefore more cards are bought and sold. And more new sealed product can be sold if there's a player base for that format (both Modern-specific product, like Modern Masters, and product that's partially demanded by Modern players, like some cards from the newest sets, making booster boxes more valuable).
4. The percentage of MTG players that feels nostalgia for the old cards keeps decreasing. Every new player is, obviously, a person that isn't familiar with old cards. So while he could feel some kind of curiosity, he doesn't feel any nostalgia, and therefore is less willing to play Legacy/Vintage.

These four points seem very reasonable and I can agree with them. However, the next question was what items would one invest in for a ten year commitment.

The problem is that very question disagrees with point number 2. The more desirable a card is the higher the price will be, and over the long run that implies a high probability of reprint. It's important to understand that WoTC is a business first and foremost. Their decisions to reprint valuable cards will go hand in hand with their overall business strategy of making money and remaining sustainable.

The good news is that it's good for WoTC to have valuable "chase" cards. Their mere existence helps justify people's willingness to spend money on cardboard and ink. And they provide a sense of assurance that while WoTC wants Modern staples to be affordable, they aren't going to "Yu-gi-oh" them (i.e. reprint super valuable cards at a much lower rarity and tank the value).

So with that point, I wouldn't consider any Modern-legal card a ten year investment or even a five year investment. I would set a two year limit on any cards avoiding a reprint--not that they won't get reprinted within two years, but I wouldn't expect them to avoid a reprint anytime after that.

That being said, we have a few more options.

One option would be to purchase sealed product. WoTC has rarely reprinted the exact same sealed product twice (the only exception I can recall is Duel Deck: Anthologies), so any sort of sealed box supply will slowly decrease as boxes get cracked for throwback drafts and whatnot.

Unfortunately, there are additional challenges when it comes to selling sealed product. Shipping costs are not negligible and demand is lower than that of individual staples so liquidity can be a problem. The issue (and John brings it up in a later post) is that the value and demand of sealed product is directly tied to the value of the individual cards in it.

Another potential avenue is to get the pimpest version of the staples. While a reprint of Dark Confidant drops the price of the regular copies (regardless of set), Russian Ravnica foil Dark Confidants are still $2,000+. On the other hand, Modern Masters 2015 Japanese foil Dark Confidants can be had for under $200 with English ones at under $80. This puts the "pimp" version at a 10x multiplier. 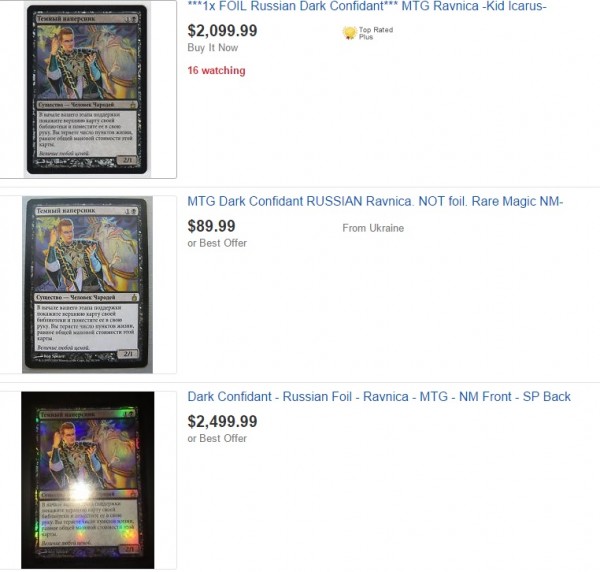 This sort of stability does give the "pimp" version a leg up on any other version of a card. The problem with these again goes back to liquidity--no Russian foil (Ravnica) Dark Confidant has sold in the past three months on eBay (and likely for even longer). So while the value remains stable, cashing out seems quite difficult. SCG doesn't even have this card on their buylist, so there's not an easy option to unload them currently.

Another option is investing in specialty product (like the SDCC planeswalker sets). If we look at the original SDCC 2013 planeswalker sets, they are currently going for $600 on eBay and selling for that price with some consistency. They could originally be purchased onsite for around $150, but easily were reselling for closer to $300 when people realized how rare they were. In two years they've doubled in value.

This seems like a relatively safe investment with a lot of potential upside. The biggest challenge is the high initial investment requirement, but with such low risk it seems like a slam-dunk investment (and in this case, the dangers of reprint are exceedingly low). 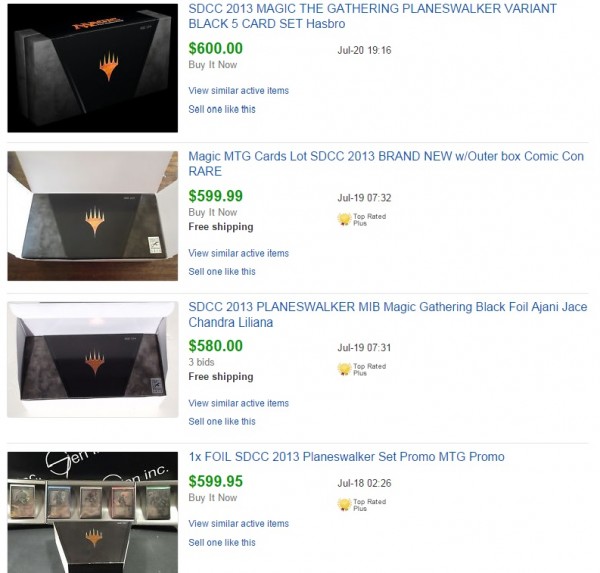 Obviously, there are other forms of specialty products like the Duel Deck Anthologies (which is currently selling for $100-$115 on eBay). While this product didn't have a massive print run either, the demand seems to be considerably lower. The MSRP was $99.99 for this product when it was released, so it's only showing minor growth.

Compare this to the SDCC 2015 planeswalker sets (MSRP of $110.99) which sells for $150+ already. The Anthologies set has a similar high initial investment cost, but a lower likelihood of the big gains of the SDCC set. 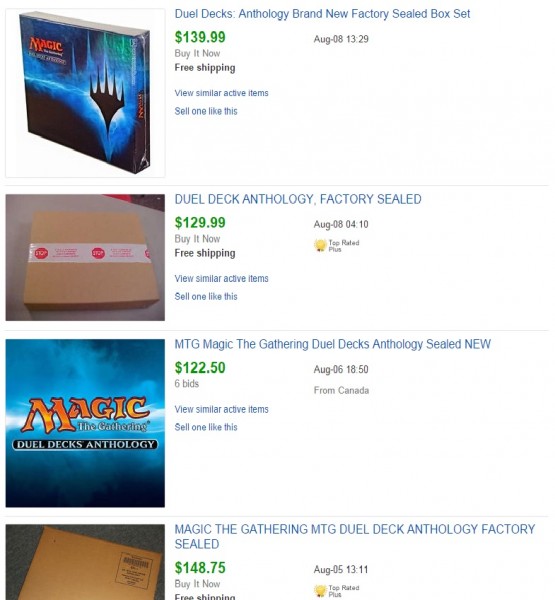 Of course, WoTC makes other specialty products that are more massively printed and require a lower initial investment, like Commander products, duel decks, or event decks. When it comes to these products one of the most important factors is the value of the singles inside them. For example, the 2013 Commander deck Eternal Bargain is the most valuable of the decks from this time, currently selling for around $35 on eBay (whereas many of the others are sub $25). Compare this to the original Commander decks which released in 2011; the lowest value one (Devour for Power or Political Puppets) goes for an easy $100.

However, if we look at a different type of specialty product, say the Modern Event deck "March of the Multitudes", we see them selling on eBay for less than MSRP ($55 compared to $75), so purchasing these anywhere near MSRP and sitting on them until now would mean you're still in the red. 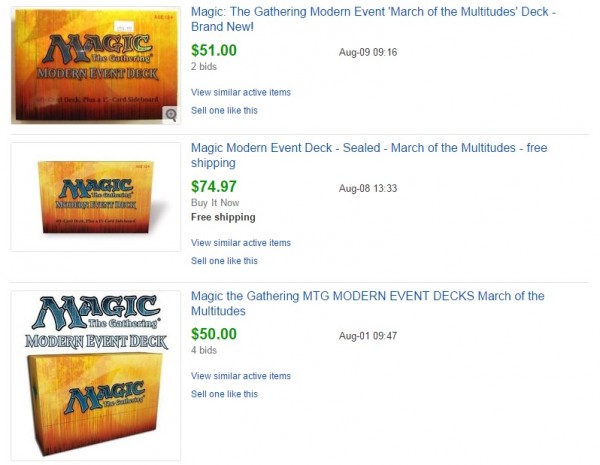 Last but not least we have graded cards. These tend to be from the earliest Magic sets and are typically only the most valuable cards, because the cost of grading is static (i.e. a flat $5-$15 per card). However, as those older Magic cards age and become rarer their price goes up and the justification for getting them graded also goes up. For a quick example, here are some prices for Beta Shivan Dragons: 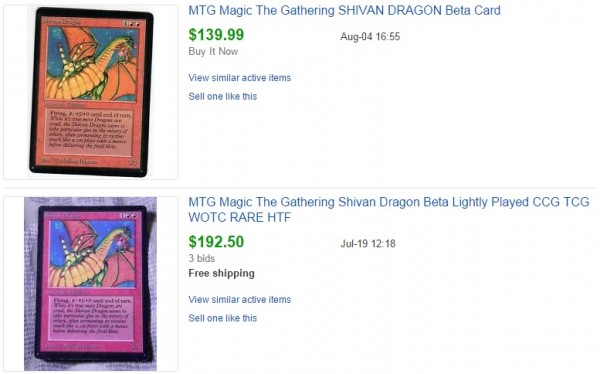 While I don't know exactly how much the PSA 10 Shivan Dragon went for, it was likely far more than $200. Graded cards are the crème de la crème of card values, often fetching 2-10x multipliers of the original (though this depends heavily on the final grade as well).

The challenge with graded cards is that because they must remain in their case when graded (or else nullify said grading) they are almost exclusively collectors items, not playable cards. This means that the demand for them is now limited to collectors, which is already a small subset of the Magic playerbase. We're even starting to see a lot of stores get cheaper older cards graded...

There is clearly some demand for these graded cards. Since they're specifically collectors items they are immune to any sort of value drops associated with reprinting and thus are a much safer investment to park one's money in. Though again, because these are specifically aimed at collectors and because collectors are a smaller subset of Magic players, liquidity becomes a problem.

From a conservative investment standpoint they are likely a very good way to lock in value though they may be difficult to move when you do eventually want to cash out, so consider that before investing too deeply.