Below are the total set prices for all redeemable sets on MTGO. All prices are current as of September 28th, 2015. The TCG Low and TCG Mid prices are the sum of each set’s individual card prices on TCG Player, either the low price or the mid-price respectively. 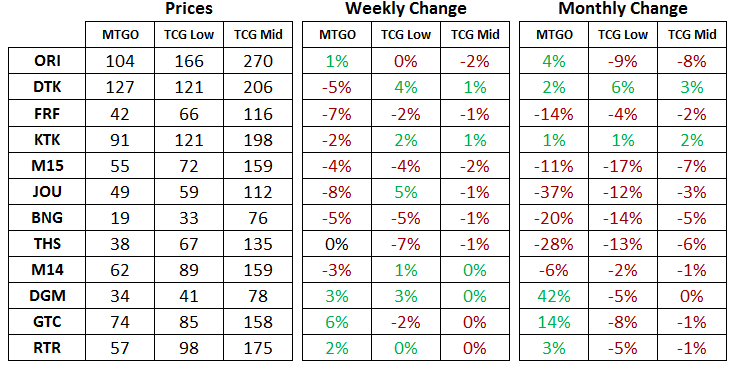 In today’s report we take a look back at the last six months of the MTGO Market Report to perform an analysis of the buy and sell recommendations.

Each closed call (i.e. the card was bought and sold) can be evaluated and judged a success or failure by looking at percentage gains or losses. We’ll also construct a mock portfolio to estimate what the net gains or losses could be for a speculator following the recommendations. Lastly, we’ll make comments on any outstanding buy calls and discuss their future.

For every recommendation, the buy price we used is the price as recorded by Mtggoldfish.com on the day of the recommendation. The bias here is that it’s possible to buy cards at a lower price than the listed Mtggoldfish price. Mtggoldfish uses Mtgotraders prices which are frequently not the cheapest (they focus on stocking every card, not the lowest price). Also, acting on the recommendation on a different day might yield different results if prices fluctuated in the interim period.

The sell price we used is the price as recorded by Mtggoldfish.com on the day of recommendation, with the following adjustments. For every card price below 2 Tix, 80% of the recorded sell price was assumed to be retained. This accounts for the buy and sell spread of most bots on low-priced cards, which tend to have higher margins.

Again, the exact price which a given speculator gets will probably not correspond perfectly to the sell price either. The purpose is to illustrate what is possible, given a reasonable set of assumptions and the actual buy and sell recommendations given in the report.

Prices used for recommendations still open are current as of Sunday, the 27th of September. The same 80% and 90% price adjustments have been taken into consideration for cards less than 2 tix and cards greater than 2 tix, respectively.

A mock portfolio based on these recommendations was built in order to put the recommendations into a different, more tangible context. The rules of this simulated portfolio are as follows. A maximum of 50 Tix was dedicated to each recommendation, and an upper limit on the number of copies was set to 40. Based on our experience, buying or selling up to 40 copies of a given card without significantly affecting prices is possible if a number of different bot chains are used.

Similarly to our summary at the end of June we also took into account the fact that Tix generated by selling positions can be re-invested into new positions. Basically, we added the dimension of compound interest to our mock portfolio.

The table below presents the percentage change in each recommendation as per the above assumptions.

* Indicates the maximum buying price we recommended for this card, although the price on Mtggoldfish was higher on the day we recommended the position.

This is a biased perspective since cheap positions, such as Herald of the Pantheon and Eye of Ugin, can have a high percentage variation with fluctuations of just a few cents, whereas their effective gain in Tix is low.

A more accurate and objective way to look at our open positions is using the table below:

The positions currently held in our mock portfolio are mainly divided into Modern and Standard positions. On the one hand, after having just sold the most profitable among our Modern positions, we are by default left with the losing ones or those we expect to grow further in the future. On the other hand, the Standard positions we have recommended, and particularly the ORI ones, aimed to perform best later this fall in the new Standard environment after rotation takes place on MTGO.

It is therefore unsurprising that so few of them are profitable at the moment. In addition, the effect of the BFZ release is being felt as prices have started to decline in both Modern and Standard.

With the profit of 114 closed positions that would have been re-invested (as any speculator would proceed with his/her own portfolio) it would not make sense to compare the total buying price of all the positions to the total selling price to estimate the overall profit generated. 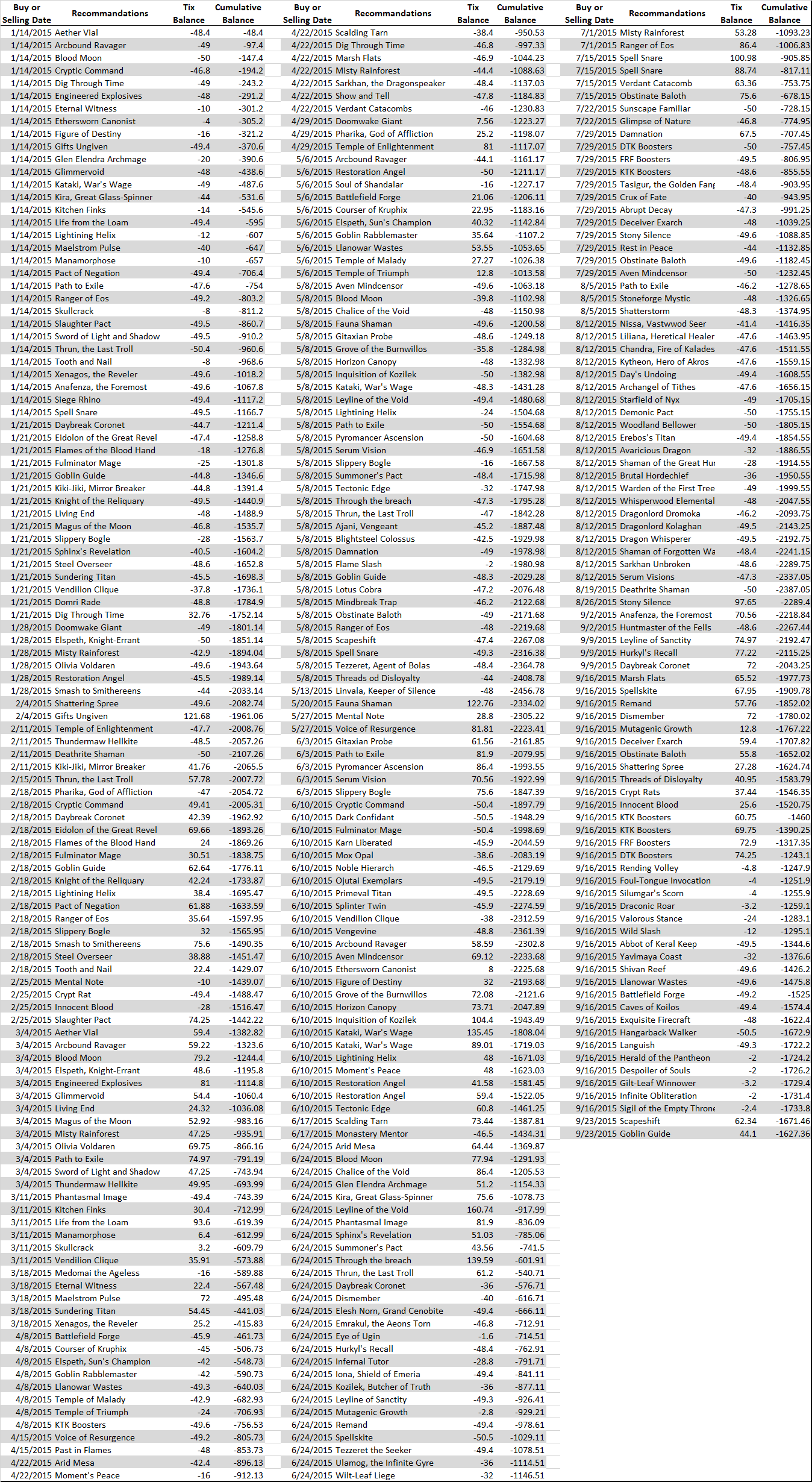 A starting mock portfolio of 2500 Tix was used to cover all of the MTGO Market Report buying recommendations, according to the above buying assumptions.

Our mock portfolio hardly moved compared to three months ago. At the end of June our mock porftolio was already up by 65.1% compared to January.

Cards from Khans of Tarkir and Fate Reforged have the unusual privilege of being the first sets to rotate under the new system. This means they will rotate out of Standard with the release of Tears, the as-of-yet unknown large set expansion due in April 2016. With that in mind, the potential sales window for any spec from these two sets will be small. February is a rough cutoff date.

Monastery Mentor has been holding value and sees play in both Legacy and Vintage. The announced change to Legacy and Vintage Daily Events is a positive step towards encouraging more play of these formats. On top of that, the format of the November MOCS is Legacy Constructed, which will be a short-term driver of prices for Legacy-playable cards. If Monastery Mentor doesn't show any significant uptake in Fall Standard, look to November for a good sales window.

Cards from Magic Origins are all solid holds heading into a rotating Standard format. Any cards that get a significant boost in playability in Fall Standard should quickly reflect it in their price, and speculators should look to sell in response to any demand-driven price spikes. Otherwise, cards from ORI will see steady gains into the winter, following the typical cycle of set prices through the year. Speculators should be looking to sell down any remaining ORI positions from December to March.

Junk mythic rares from THS are attracting buying activity in recent weeks. Medomai the Ageless has bumped up to a higher level and will receive further buying interest after the BFZ release events die down. This one will be a long-term hold as long as an online set of THS is priced at a discount to the paper version.

The progression of Modern prices has clearly come to a halt at this time of the year, when Standard is about to rotate and a new Fall set will be released in few days. Several weeks ago we decided to sell most of our profitable positions which, by default, left us with losing positions or ones that haven’t increased enough according to our expectations.

Our current Modern positions break down into two categories: Modern Masters 2015 positions and the rest. Several of the “other” Modern positions, such as Ajani Vengeant, Tezzeret, Agent of Bolas and Lotus Cobra, were bought when the full list of MM2 was announced. They haven't seen much play in the current Modern metagame and their trajectory has been flat. However, with more frequent appearance in Modern decklists, their prices could still increase significantly.

Domri Rade hasn't worked out as a speculative call. Although it has held value as a redeemable mythic rare, the hope was that Modern play would drive the price at some point. On that front, it went from fringe Modern playable to not being played at all in the past year. This card should be sold to free up tix, either this week in advance of BFZ release events or at the end of October just prior to the redemption cutoff date.

After potential price weakness due to the release of BFZ, MM2 positions are expected to increase in price again later this Fall. MM2 rares should be the most sensitive to seasonal price drops, while mythics will be more stable and possibly avoid a dip entirely. For example, Fulminator Mage is down from almost 14 Tix earlier this month to what appears to be a floor around 10 Tix.

It was probably preferable to sell Fulminator Mage two weeks ago, but we are confident that another opportunity will occur in the near future, as with other MM2 rares. Following widely predictable cycles, prices are likely to be back up again in two months or less. Finally, the introduction today of Modern Leagues might also boost demand for Modern and thus benefit prices earlier than previously anticipated.

The outlook for these two formats is not getting better for speculators. For Legacy, the MOCS in November has been a longtime target for any positions in this format. Even with this upcoming event it is uncertain if any substantial benefit will come of our Legacy recommendations. Holding onto the Legacy positions to sell as the event approaches is the only move available at the moment.

As announced last Monday, the introduction of eight-player queues may momentarily sustain or increase prices. At this time, and without a real change in the trend, we still recommend selling any Legacy speculations in the lead-up to the Legacy MOCS.

Vintage should be considered a no-fly zone for speculators. Prices have been drifting down for months with nothing to indicate a reversal anytime soon. Vintage staples keep hitting record low after record low.

Pauper is subject to frequent fluctuations, which makes it tricky to make recommendations on the platform of the weekly Market Report. However, the format is popular enough for profitable speculations if you can keep abreast of the shifts.

Eight-players queues will be introduced starting October 7th, and Pauper leagues are the next in line after Modern. Flame Slash and Sunscape Familiar are our current Pauper positions, and they may benefit from these upcoming changes. We will be paying close attention to the evolution of Pauper staples and prices, as they might become even more attractive for players and speculators in the near future.

It's time to cut this one loose in advance of the redemption cutoff date for Gatecrash. Look for this card to start bleeding value in November and for its price to start a slow and inexorable trend downward.

Although this spec didn't work out, it's possible this card makes a resurgence in Modern at some point. Remember it as a long-shot spec as it bottoms over the winter.