Below are the total set prices for all redeemable sets on MTGO. All prices are current as of September 7th, 2015. The TCG Low and TCG Mid prices are the sum of each set’s individual card prices on TCG Player, either the low price or the mid price respectively. 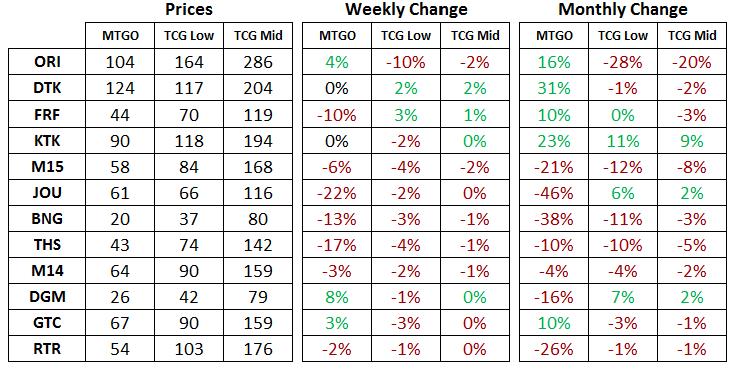 Although redemption for RTR has already been cut off, it's almost time to remove the other sets from the price tracker as the redemption cutoff date of early November is looming for GTC, DGM and M14. After the release events for BFZ wind down in the middle of October, there will be one last chance to redeem these sets. It's typical to see a final bout of redemption-driven demand at that time. Any remaining positions in mythic rares that get most of their value from redemption should be sold by the end of October.

Standard staples from these sets are bleeding value at a prodigal rate in recent weeks. Temple of Malady and Temple of Epiphany from JOU are two prime examples of this. Both have been over 10 tix in the last month, and both are now down to 3 tix. Do not expect an end to the carnage until Standard rotates in October.

There is some value starting to appear though as Xenagos, the Reveler is now close to 1 tix, which is not far off of the 0.8 tix level that Gideon, Champion of Justice of GTC reached last year. Both planeswalkers are similarly unplayable in Modern, so the price trajectory of Gideon is a good estimate for Xenagos. If Xenagos reaches 0.8 tix or less, don't hesitate to start accumulating this card.

The price of M15 is holding up better than THS has been, partly as a result of featuring the enemy-coloured pain lands. Since these are also present in ORI, they will maintain their Standard utility and thus contribute to M15 holding more value than it otherwise would have if the entire set was rotating out of Standard. This also means that M15 will end up having a different level of demand from redeemers than THS. Speculators should approach M15 cautiously until it rotates out of Standard, though junk mythic rares are still a good buy if they reach 0.4 tix or less.

The paper price of ORI took its first big hit in the last week. As more sets are redeemed, the digital and paper prices will continue to converge. In the near term, this means that paper sets will be getting cheaper, but when BFZ is released and drafters switch formats, there will be upward pressure on the digital price of a set of ORI. Speculators should still be targeting cards from ORI, but with some eye to BFZ and the need to be liquid during release events.

The Tarkir block sets saw mostly positive price changes in paper, with TCG Low for KTK being the one exception. Although it is foolish to try and definitely declare a bottom or a top without the benefit of hindsight, it does appear that the paper prices on these sets will not be heading lower. This will set the stage for broad price increases for the MTGO versions, once the dust settles on the BFZ release events. Patient speculators who were acquiring cards from these sets earlier this year will be able to reap decent gains into the winter.

On average Modern positions keep cruising up this month although at a rather slow pace. Modern Masters 2015 prices went up by about 15% over the last four weeks and should gain about the same percentages before the release of BFZ on MTGO.

This past weekend the SCG Modern Open saw Todd Anderson win an Infect mirror match in the finals and put a Slivers deck in the Top 8. Although this is not the first time a Slivers deck featuring Collected Company has been seen in Modern at this level of the competition, it gave Sliver Hive, Sliver Hivelord and a flock of other slivers a huge boost. A boost that is not, however, likely to sustain even in the short run.

September is usually a month of contraction for Modern and consequently also a month of sale. As observed during the past few years, the release of the fall set marks a clear decline in Modern prices with players redirecting their wealth to a brand new Standard.

In this report we try to provide guidelines and buy/sell recommendations to the best of our knowledge and research. We also encourage speculators to make their own educated decisions, according to their bankrolls, portfolios and personal preferences.

For instance, several MM2 positions, including Leyline of Sanctity, Spellskite, Daybreak Coronet and Hurkyl's Recall, have topped their first MM2 spike that occurred earlier this July. It may be time to sell these and to move on to other speculative targets. Alternatively, waiting a few more weeks could increase margins and should also be considered a well reasoned decision.

Legacy positions remain mostly unchanged again this week. The Legacy Price index is stable for the past three to four weeks now and hasn't really recovered from the small dip recorded during ORI release events. In the grand scheme of things prices remain very stable and are, on average, slightly below their three-year average. Hopefully, the upcoming Legacy MOCS in November will drag several positions up during a window Legacy speculators don't want to miss.

After hitting an all-time low about a month ago, Vintage prices, and more precisely P9 prices, have currently rebounded by about 15% in average. Prices still remain below their pre-ORI levels and nothing indicates that the general downward trend is coming to a halt. Vintage remains a poor place to invest on MTGO.

Pauper continues to show signs of a healthy and dynamic format in terms of price fluctuations, which is a good indicator of speculative opportunities. This being said, the combination of sometimes rapid price fluctuations and a greater average spread than Standard or Modern positions prevents the margins from being as spectacular as one may think by looking at price charts.

Here again it is up to each individual speculator to take action. The weekly publication of this report often renders potential Pauper recommendations inadequate. Pauper speculations can nonetheless generate a constant stream of Tix for small bankrolls and speculators willing to pay attention to daily price variations.