For several months, there has been talk, by myself and others, of the possibility of short selling on MTGO. I began to write a long article (which will probably be broken into several parts) about short selling on MTGO five months ago. Although I'm close to finishing the whole thing, I didn't want to postpone the discussion any longer.

Recently I executed a successful short sale of Jace, Vryn's Prodigy. I figured this was a good opportunity to introduce the concept, at least briefly, here on QS.

While attractive, short selling has been widely regarded as difficult or impossible to apply to Magic cards. MTGO, however, seems to provide a more conducive environment, with significantly smaller spreads, instant transactions and an ease of finding transaction partners.

My short sale of Jace proves that it's possible. Today I'll explain exactly how I did it.

The new version of Jace has already proven itself in several Standard decks (pre- and post-BFZ), in Modern and, apparently, even in Legacy and Vintage. This time around it seems that the new Jace, the Mind Sculptor is really here.

Although little doubt remained that Jace was the real deal, its price bumped from an already respectable 35 Tix on Thursday, October 1st, to 47 Tix on the following Monday. Ironically, no Jaces were found in the finals of the first Standard Open after rotation, SCG Indianapolis, nor in the top two finishers of this past weekend's Standard Open, SCG Atlanta.

Faced with this abrupt spike and a 45+ Tix price tag at the end of the weekend, I sold 10 copies on Sunday night at 43.4 Tix each, and another five copies on Monday night for a little over 45 Tix each. This averages to 44 Tix per copy.

By Thursday night I had bought back my 15 Jaces at 40 Tix each.

So I made 60 Tix by short selling my Jaces and buying them back four days later. This is clearly not your typical Magic finance scenario...

How did I end up with 15 copies of Jace, Vryn's Prodigy, a card that should have been avoided as a spec target due to its high starting price? Why would I buy a spec back if the goal is to sell as high as possible and then move on? And why buy back a card that is likely to go farther down anyway?

Let's try to make sense of all this and see how to make short selling a tool in the MTGO speculator's arsenal.

Short Selling Magic Cards - Why Not?

Since speculation became part of the Magic economy, it has consisted in buying a card, and then selling, ideally higher. Short selling is a speculative move that calls for the complete opposite: selling first, and then buying, lower if possible.

Short selling is a well-established practice in economics and the stock market. It usually consists of borrowing a security you don't own in order to sell and then later return to its owner. The bet being made is that the borrowed security is about to lose value. The essential mechanics--to buy low and sell high--haven't changed, but the order of the two transactions has.

An Inadequate Model for Magic?

The Magic finance system as it's set up currently is not really suited for short selling. The basic problem lies in the difficulty of finding someone willing to loan out their cards.

We can break down the owners of any given card into just a few categories:

What's lacking here is someone with no need to sell their cards in the short term, nor the desire to use them in events. In this situation, the owner would not care much about price fluctuations.

This set of circumstances may be rare, but it does describe the situation of at least one group of people: anyone currently speculating on full sets.

Investing in Full Sets - More Than Meets the Eye

Back in February I talked about my plans to invest in full sets, specifically of Khans of Tarkir (KTK). I bought about four dozen full sets of KTK, and a similar number of Fate Reforged (FRF) and Dragons of Tarkir (DTK).

More recently I also invested in 15 Magic Origins (ORI) full sets. As discussed back then, full sets require little time and offer decent returns, while allowing you to invest a large quantity of Tix at once.

You can see how my full sets are faring at the moment in the chart below. KTK and DTK are doing well, whereas FRF is lagging a bit.

The theory behind full set speculation is fairly simple. Hold onto a stack of 269 cards, in the case of KTK full sets, for several months and then sell the same 269 cards at a profit. The price fluctuations of individual cards don't matter, only the full set's price. Since the value resides in the integrity of the set, there's no incentive to sell individual cards even if they spike.

This creates the perfect terrain for short selling. The owner can loan out cards without interfering with their speculative strategy. Or they can short sell their positions themselves.

There are a lot of factors to consider, but basically every time you suspect a card in one your full sets is headed downward, there's a potential short sell to execute. If you can do so successfully, you'll supplement the return on the full set speculation with additional profit.

I bought my ORI sets at 101 Tix each with the declared goal of selling them sometime later this Fall or early this Winter with a 30% to 50% profit. By definition, buying 15 ORI full sets included buying 15 copies of Jace, Vryn's Prodigy.

Quickly after release, Jace established himself as the most expensive card in ORI, above 20 Tix. Jace kept increasing in price and was way over 30 Tix by mid-September.

30 Tix is already an impressive price for a core set mythic. As far as mtggoldfish can track (from M12 to M15) only two mythics reached that price--Thundermaw Hellkite and Nissa, Worldwaker. Nissa only sustained that price for two weeks while the Hellkite hung in there for about two months.

Needless to say, a 40+ Tix price tag puts us in completed uncharted territory for a core set mythic. Uncharted, and most likely, unsustainable.

Especially after a 10 Tix price spike, a subsequent drop, even momentarily, was inevitable. This is why I decided to sell my 15 copies of Jace. The price did drop and four days later I rebought.

Why rebuy so early if I believe Jace is overpriced and additional drops are inevitable? Remember, my main goal here is to speculate with ORI full sets. Short selling Jace was no more and no less than a quick flip. I simply grabbed my 60 extra Tix and kept riding the ORI full set wave, independently of Jace's future movement.

Another reason to rebuy Jace after only four days is that the card will still be in demand and the price could increase again. Wednesdays and Thursdays are usually the days of the week when prices are at their lowest on MTGO, so rebuying my Jaces on Thursday made sense. It turned out prices went back up on Friday...

Finally, the price of Jace, Vryn's Prodigy will be insanely high as we enter Pro Tour Battle for Zendikar. Depending on Jace's performance during this event it could seriously tank. To sustain a 50+ Tix price Jace needs to show up in nearly every deck and be outrageously dominant.

I'm not sure this will happen, and I want to hold my Jaces this Sunday in order to, that's right, short sell them again!

For Once, Wishing for the Worse

Holding on to full sets from Standard makes me want to see cards with high expectations miss the mark at this weekend's Pro Tour. Weak showings provide as many opportunities to short sell the cards in question.

Last year, the aftermath of Pro Tour Khans of Tarkir saw Polukranos, World Eater and Stormbreath Dragon rapidly shed a big chunk of their value for failing to meet expectations. 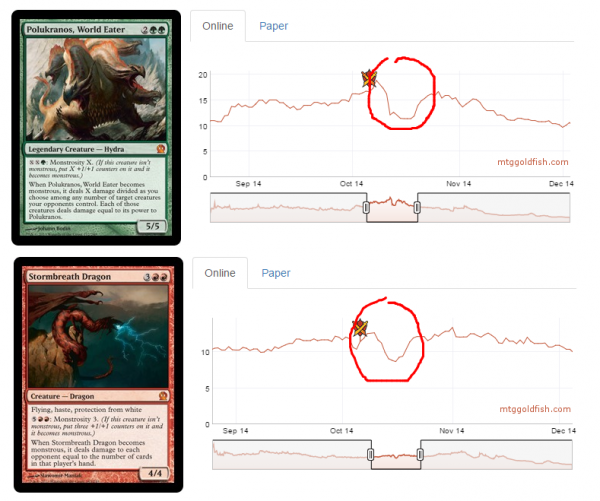 These were clearly excessive reactions as both cards bounced back soon after, and they continued to play an important role in Standard.

If similar dips occur during PT BFZ, then short sales could be executed, provided you own full sets of ORI, KTK, FRF or DTK, or can borrow the cards. Jace, Vryn's Prodigy is my number one candidate for a short sale this weekend.

There's a lot more to debate regarding short selling on MTGO. Much remains to develop in the area of theory and technique, as well as a potential business model. But we know the strategy is doable and capable of generating gains.

Those who follow my "100 Tix, 1 Year" project know I had already executed a few short sales on that account. The difference there was I borrowed the cards from my main account.

Although I was technically borrowing cards from myself, I paid fees from the 100T1Y account to my main account. Thus the transaction completely mirrored a "real life" short sale in which a speculator borrows cards from someone else. This was in line with the purpose of the "100 Tix, 1 Year" project--anybody can do what I do, including borrowing cards with a fee and short selling.

It will be interesting to see how short selling develops in the Magic world. Look for my more in-depth article series on the topic soon.

3 thoughts on “Insider: [MTGO] An Introduction to Short Selling – The Case of Jace”