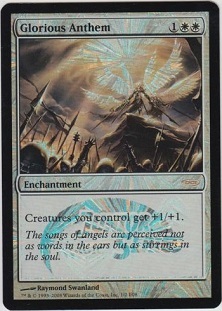 In case you missed this story, there was a binder valued at approximately $60,000 misplaced and returned at New York Comic Con through communication on Reddit. The binder was found by a young man, who put the legwork in to getting the binder back to its original owner- the owner's thank you letter can be found here.

For his actions, the young man who returned the binder was awarded an expedition Wooded Foothills and a promo Glorious Anthem- which is worth quite a bit more than the Foothills.

The returner has received a lot of gratitude on Reddit--and rightfully so in a world where we celebrate the police catching collection thieves, not one where we expect lost articles to be returned.

Yesterday he made a post thanking the community for all the praise he has received, but what stood out to me was his mention of one particular user shaming him as a potential thief.

Many people posted saying how I was amazing for not hiding the truth and just selling the collection. And I want to be honest: I did think about doing so. When I picked the binder up and saw the contents, I was overwhelmed. I could have kept this or sold it. I knew there was so much value and it was just really tempting to keep it home. Maybe that's why I brought it home with me instead of bringing it directly to the Lost and Found at Comic Con.

Once I was home, I just stared at the binder for a good 30 minutes thinking what to do. I think what ultimately led to my decision of posting on this subreddit was when I compared my joy to Mr. Grayson's sadness. I didn't know that the collection was worth 60k, but I did know it was worth A LOT, more than the amount of money I've made working at the library. I knew that whoever lost the binder would probably be depressed about it for the rest of their lives as compared to me who would be temporarily happy getting a lot of money. That's when I decided to post on the subreddit.

After I posted the "found a lost binder" post, I felt relieved that I had done the right thing. All the weight kind of dropped off my shoulders and it felt pretty good. But soon after, there was a guy who said pretty mean things about the actions I took. Whoever made the comment deleted it but basically, I took it as him indirectly calling me a thief. And it really hurt me because it could have been true. It didn't help when it became one of the most upvoted comments on the post, and I just kind of felt really terrible about myself. I know that the internet isn't the kindest place in the world (which you guys proved to be not necessarily true!) but yeah, it really hurt.

To attack the character of somebody who did the right thing in a situation with significant gains for doing wrong is deplorable. Most people would be tempted to keep the collection in this instance, and you'd better believe that many would have indeed done so. Further, if you wouldn't be tempted to do wrong, then your good actions aren't really worth much, are they?

I would imagine that most readers of Quiet Speculation themselves own substantial collections, and, as somebody who has had a few lost articles turned in to convention lost and founds, as well as having a tablet stolen recently, I am appreciative of the actions of this young man and others like him.

I've written about theft several times recently, but it's also important the remember that sometimes things are simply misplaced, and for that reason it's worth reposting PSAs to this effect. Take measures to make your collection uniquely identifiable, and whether lost of stolen you will increase your chances of getting it back.

3 thoughts on “Lost and Found – Restoring Faith in Humanity”