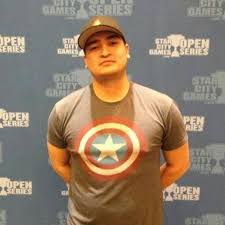 For those who don't know who I am, let me introduce myself.

I'm Eric Hawkins and I have been playing Magic the Gathering since Revised. While I love to brew up crazy decks, I recently have been taking Magic much more seriously and have had to start playing the top tier decks in each format. As far as my play style, I usually play either combo or aggressive strategies.

After parting ways with Legion Supplies at the end of 2014 I felt like it was the perfect time to see how good I really was at Magic. I felt that I was a good Magic player, and I wanted to take a year to just play. To see how good I was, I need a proving ground and a goal.

There were a few ways to test this. I could have gone to the Grand Prix Circuit, PPTQs, or the SCG Circuit. I felt like the Grand Prix Circuit didn't have enough opportunities, and I would basically just have to spike one, which doesn't prove anything but that I got lucky once. PPTQs felt unfulfilling, in that if I were to win one I would have to wait until the RPTQ to play again, and if I missed I would have to wait three or so months to do qualify for the next RPTQ.

This left the SCG Circuit. The draw of the SCG circuit was the combination of local events through IQs, bigger showcase-style events like the Opens and Invitationals, and a way to measure my progression with the leaderboard. This would be my proving grounds, and making the Player's Championship would be my goal.

I won't go through everything that I did over this last year, but let's just say that even though I didn’t quite make my goal, it went great. How could it be great if I didn't make my goal? Because I accomplished a ton through the journey. I won both SCG Regionals in Minnesota, SCG Modern States, made countless IQ top 8's and even landed an SCG Open Finals appearance.

I also got to meet a bunch of new people who I am lucky enough to call friends.  So I got to play Magic at a very high level all year, meet some great people, and I proved to myself that I can get to where I want to be with bit more work.

This year I will continue grinding the SCG Tour, and I will be making another run at the Player’s Championship. With the changes that SCG is making, this won't be an easy road. While there will be IQs locally, you will no longer get points for these events to help you on your journey. SCG Opens, Invitationals, Regionals, and States are the only way to get points towards the Player’s Championship. This means that if you want to qualify, you will have to see success on a larger stage.

Now some of you might be wondering if there's good expected value to making this run without IQs. I'd say there is. To illustrate this, let's take the Open in Cincinnati this weekend as an example. Round trip driving from Minneapolis is 1406 miles. My car, which kind of sucks, gets 23 mpg. That means the trip wil take about 62 gallons. Gas is currently around $2.00 per gallon, so we are looking at $124 round trip. I can usually find a hotel at around $50.00 per night, and we will be there for two nights, so that's another $100.00. Add an oil change for $30.00 and we are looking at about $254.00. I will be going with 2 other people, so that will cut the cost into thirds, making it about $85.00 a piece. Add the cost of entry and we're looking at $135.00. Of course, there is food and such, but that varies each time so I will just round to something like $200.00.  $200.00 dollars is also the prize for getting top 32 of an Open. 10-5 and is usually the record that you need in order to make top 32. I believe that I can average 10-5 and top 32 most opens, and I'm confident that I will achieve stronger records periodically. This makes my EV even, and possibly positive. Now if I have to fly to an Open that will change the equation a bit, but you can usually find very cheap flights on Spirit and Frontier. Sometimes flying is even cheaper than driving.

Finally, you can't get to where you want to go without the help of those around you.  So thanks to everyone that has helped me over the last year.  Special thanks to Matthew Tickal for being my travel buddy and talking me out of some of my stupid choices. Or at least trying to. Also, huge thanks to my girlfriend Serena. She is always there listen to me and be supportive, even if she has no clue what I'm saying.

Here's to the future!

If you were looking for strategy or looking for what to play, that will be coming up in future articles. I love to talk basically anything Magic, so feel free to find me on Twitter @conanhawk.

3 thoughts on “Allow Me to Introduce Myself”