Welcome back, readers! I came up with today's article while helping my favorite local game store (LGS) evaluate their business.

For a bit of back story, there are seven Magic stores within a 40-mile radius of me (with another two about an hour away), so competition can be a bit fierce. My preferred LGS used to be top dog, but when the 7th store opened up they pulled away a decent number of customers.

Recently I had a talk with the owner of my preferred LGS (we'll call him "Dave" for simplicity's sake). One of the older players had been shopping his massive collection around to players, to no avail. He finally offered it to the LGS's and the new store must have made him the best offer.

I ran into the guy and found out how much they had paid. When I relayed this information to Dave, he was blown away. He was surprised that the newly-established competition could afford to spend over $3000 on a single collection when he could not.

This was eye-opening for me, because I had assumed he had enough capital to pick up this type of collection when it came in (it's rare for something that large to go on the market around here). I asked him why he couldn't and he admitted that business wasn't going great, but he didn't know what to do to improve.

I talked it over with my girlfriend (who has both a B.S. and M.S. in business) and came back to him with a proposal for some market research to see where the issues laid.

The first step was to gather input from current and former customers. I sought this information out on Facebook and relayed the information anonymously, which meant customers could respond to a third party without fear of reprisal.

The other half of the data was Dave's self-assessment of his store's own strengths and weaknesses. By comparing the problems he saw to the problems reported by customers, I could identify any major disconnects and suggest ways to improve them.

I copied the comments from Facebook messages and placed them into a text document, splitting off the strengths and the weaknesses to form two columns for easy comparison. I then did the same thing with Dave's response.

Next I put the information into a PowerPoint document, illustrating both the strengths and weaknesses with a pair of Venn diagrams. 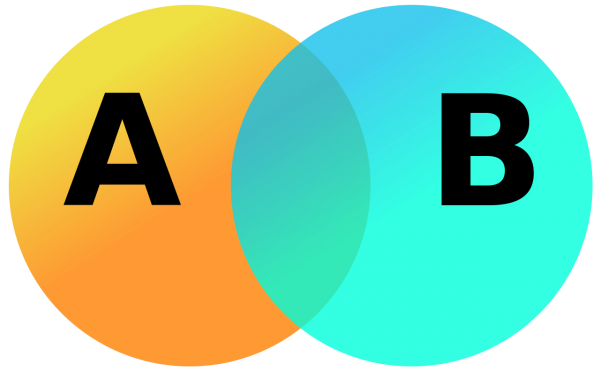 This presentation provided a simple and intuitive comparison between Dave's perceived strengths and weaknesses, and what his customers believed they were.

The first thing that popped out was a lot of complaints from customers, none of which corresponded to weaknesses on Dave's list. This shows a major disconnect between what he thinks the problems are and what they actually are. This is a bad sign, because it means any efforts to improve will target the wrong things.

I made sure not to sugarcoat any of the customer feedback, even though some of it might have seemed vindictive or mean. As a store owner, you need to develop a thick skin, and understand that any random person who walks in might notice the same issues and never come back.

The data we gathered from this exercise was all qualitative, so we can't just run the numbers or anything like that. Some of it might be a little random and hard to analyze, but that's not the case for all of it.

"We have the best prices."

One of the strengths Dave listed was that he had the best prices. To make a statement like that you ought to have some metric you use to validate it. In his defense, he occasionally had a third party call other stores asking for a price check to compare to his own prices. But if you aren't doing that a lot and consistently, then you have too few data points to identify a trend.

The other question is who was he comparing himself to? If it's just the stores in the upstate, his statement might be accurate, but compared to online prices he's nowhere near competitive on many things.

To make matters worse, I compared his in-store prices with his TCG Player store prices and found some cards were cheaper online. This is a huge no-no, as selling on TCG Player loses you about 10% to their sales marketplace, and additional money to shipping.

It's only natural that consumers will gravitate towards the cheapest prices---in this case you're incentivizing them to go through the middle man to buy your own cards!

When I brought this to Dave's attention he couldn't give me a decent answer, but I did see him offer to drop prices for a customer to match the online store. So it seems he has grasped the issue and is taking steps to remedy it.

"Our store holds the most competitive tournaments."

This was another strength he listed and again I had to question what metric he was using.

Another store owner in the area can claim he played on the Pro Tour in the early 2000's, whereas my LGS has several players who repeatedly day-two major events, and one who lost in the finals of an SCG Open. That's some pretty nebulous information to try to process, and I'm hesitant to make a blanket statement one way or another.

There are plenty of good players in our area. If a store wants to make such a claim, I feel they should have a very high percentage (if not a monopoly) of the customer base who consistently does well at larger events.

The other half of this equation is what the store is doing to encourage competitive play. Whether it's running a lot of larger events or hosting playtesting sessions, there are plenty of things stores can do to attract the most competitive players. I believe that claiming one is "the most" of anything requires this type of dedication and "above and beyond" thinking.

The last step in a breakdown like this is to evaluate the feedback that was received. It's critical to split the weaknesses into things that can be immediately remedied, things that will take a little time, and long-term or systemic issues that may take considerable time and effort to address.

You'll want to work on all of these things immediately, but stay realistic. As expected, systemic issues may take longer to fix, but any progress is promising.

It's just as important to recognize one's strengths, so that they aren't lost in the changes. After all, you don't want to solve one problem only to create another or override a strength to the point that it no longer exists.

Keep in mind that customers may or may not notice positive changes immediately. But they will eventually, and that shouldn't stop you from making progress towards improving. At the end of the day, if you can improve the overall experience, you'll be able to attract new customers and retain them better.

3 thoughts on “Insider: Assessing Your Store’s Strengths and Weaknesses”