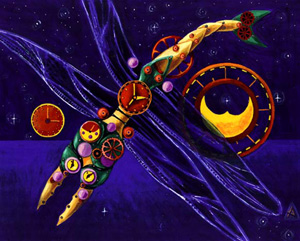 Today's article will focus on the "rarer" Magic cards. Not due to age, but instead other characteristics about the cards that make them rarer than the typical cards you pull out of a pack. A lot of today's data will be pulled from the Magic Librarities, Squt's Misprints, and from TheJGit's Beginner's Guide, which have a plethora of interesting and useful information for anyone who buys, sells or collects Magic cards. With that let's get started.

We all know that pack foil versions of cards are pretty much always worth more than regular copies. The current rarity of a pack foil common is 1 in 12 packs (except the Modern Masters/Eternal Masters packs with a foil in every pack) with uncommons 1:18, rares 1:36, and mythics 1:216

Foils were added to Magic as the collectible aspect of the game was becoming too easy, so to speak. With the huge print runs store didn't run out of product until demand had been met, so collectors could easily assemble a set if they so chose. By adding "premium" cards to the packs, WoTC essentially gave collectors something to chase down, without alienating players by making ultra-rare tournament staples they would have to shell out for.

These types of cards are found in games like Dragonball Z and Yu-Gi-Oh, which may be good for sales but is often upsetting to players. In order to appease these players a lot of other TCGs now guarantee one of these chase cards in each box---unfortunately for store owners, when that card is pulled players often no longer want to purchase packs from the same box.

Going back to Magic specifically, foils tend to be the most common "non-normal" Magic card, and they have a pretty stable known rarity. Fortunately (or unfortunately, depending on your point of view), Wizards of the Coast allows players to redeem foil sets from MTGO, and thus a complete foil set is no longer that difficult to acquire if you really want it.

Without this redemption it would be much harder to complete foil sets. For a non-premium set of most Standard-legal sets it takes perfect luck and opening approximately 121 packs. This number is based solely on the probability stack-up and obviously can't account for getting the same mythic twice (hence why you need perfect luck).

If the foils are distributed in a similar fashion, you would need to have perfect luck (again) and open 15*216 = 3240 packs to get a full foil set (this is calculated because of foil mythics having the highest rarity and there being typically 15 (not counting DFC) they set the probability)---or 90 boxes. Knowing that you'd think all foils would be worth at least six times the regular version, but the demand for foils is nowhere near that high.

Still, the going rate for bulk foils (ones that aren't even remotely playable) is $0.05 each and playable ones can easily hit two to twenty times the going rate. The wide range is attributed to older eternal foils, which have a much higher multiplier due to higher demand and a comparatively rarer foiling process. Most Standard foils tend to fall right around the 2x to 3x multiplier range.

To begin with, "misprint" can refer to a lot of different types of cards. They're usually broken down into the following main categories:

It's also critical to keep in mind that misprints are often a way to "pimp" one's deck to the fullest (many misprints are considerably rarer than foil versions, and misprint foils are rarest of all). So a misprint's value will depend heavily on a) the type of misprint and how visible it is, and b) the card's playability.

The best example of a misprint with the wrong basic information is the Spanish Serra Angel/Time Elemental misprint shown below. 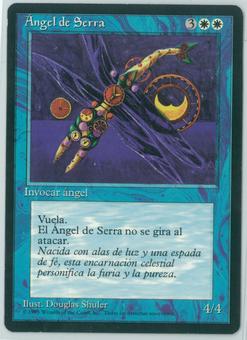 The card has all of the stats of Serra Angel (including casting cost, power and toughness, flying and vigilance), but it has the artwork and blue frame of Time Elemental. One recently sold on eBay for around $95, whereas any other foreign BB Serra Angel goes for around $4-$8.

Another well known one is the Serendib Efreet with the artwork (and border) from Ifh-Bíff Efreet. 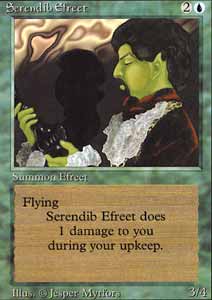 However, this error was present across all Revised copies so they can be had for under $1 each.

The most famous of these is likely the Revised Plateau, where the artist credit is given to Drew Tucker (who did the original Alpha Plateau) when the actual artist was Cornelius Brudi. 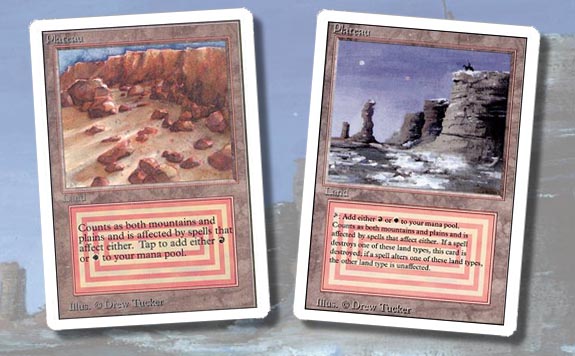 As the Revised Plateau is the most common version of the card and it occurred on all copies, it's not really more desirable. 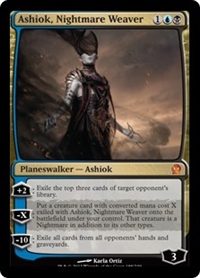 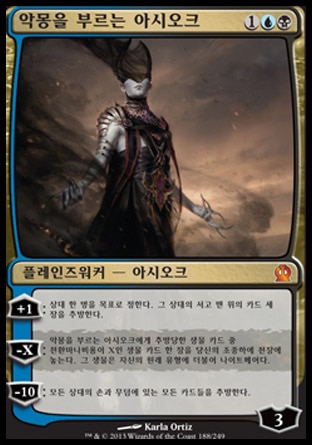 The Korean version goes for about three times that of a normal Ashiok (as of me writing this article).

These don't seem to occur all that often but apparently there was a big issue with German Mercadian Masques foils where several cards had the same name (but only on the foil version). 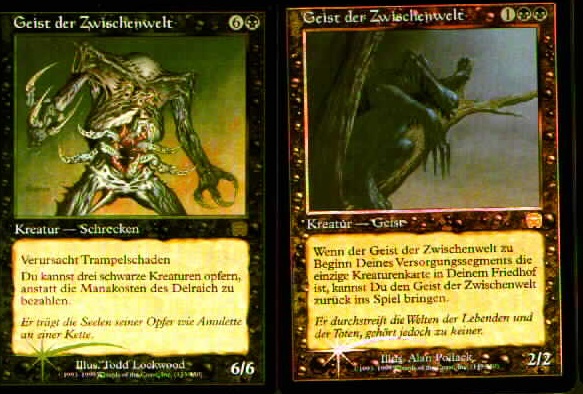 The biggest problem with a lot of these types of misprints is that they are quite rare and thus finding prices is difficult.

Anyone who has worked in a manufacturing environment can tell you that while the goal of mass manufacturing is to make a uniform product, the faster your system goes the easier it is for something to go wrong.

Given the sheer size of print runs these days, Magic cards are probably printed at very fast rates, and there's a good chance something will go wrong during printing. Now, most of the time these types of errors should be captured by the printer Cartamundi's quality control system. However, given the sheer volume of product things will slip by.

This occurs when one of the sheets is accidentally flipped around as the front and back of the cards are printed separately and then glued together. 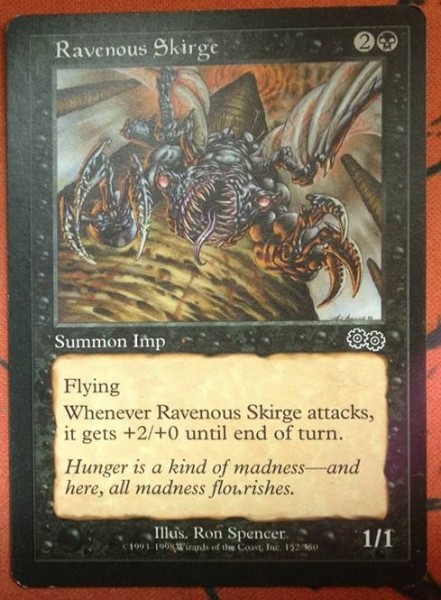 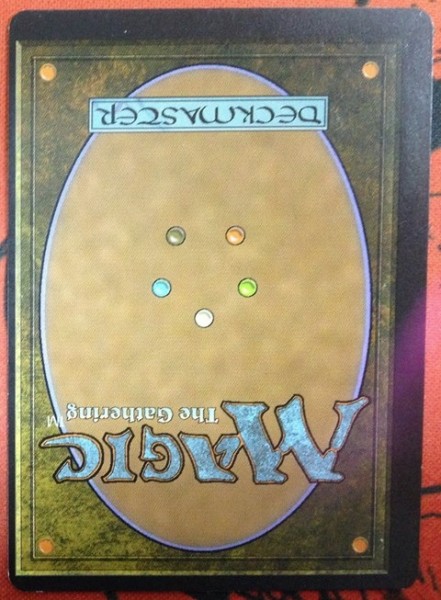 These types of cards have additional value to some collectors and even bulk commons like this will sell for a several dollars (or more) to the right collector.

These typically occur either when some ink is missing in the printing process (albino) or too much ink is on the rollers (dark).

One of the biggest challenges with "albino" cards is that some people who like the look but don't want to try and find real versions will simply leave cards they want lightened out in the sun. This does create a faded look, but on true albino cards the other colors appear crisp and clear. See the black border and frame in the Italian Lost Soul below for an example. 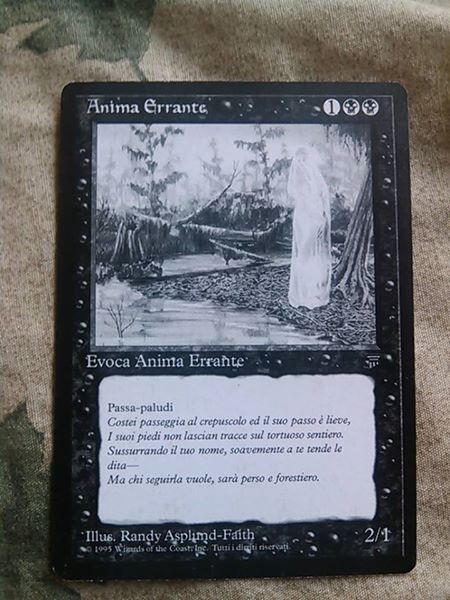 Below is a "dark" printing in which the actual character in the art himself is darker than usual. These can often be difficult to catch without having a side-by-side comparison, and again, as with all misprints the level of being "off" plays a big role in any additional value. 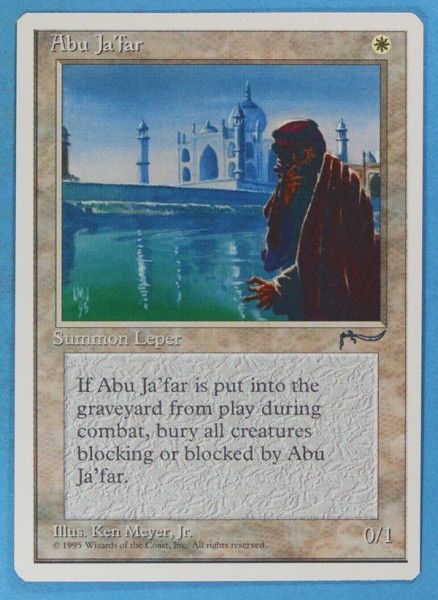 One last misprint that typically occurs with pre-release cards is that while the card itself is fine, the pre-release date is misplaced on the card. This stamp can occur all over, forward, backward, double-stamped, or even not at all. 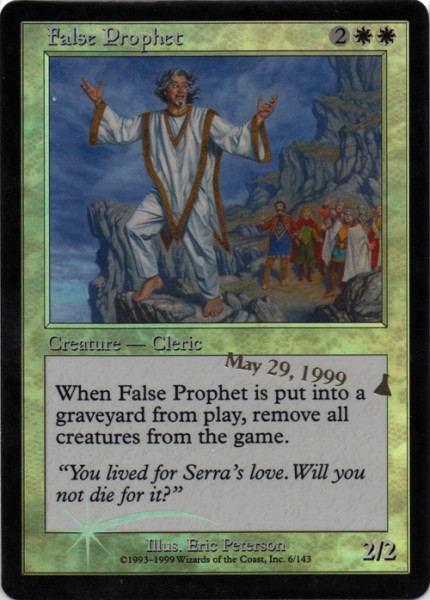 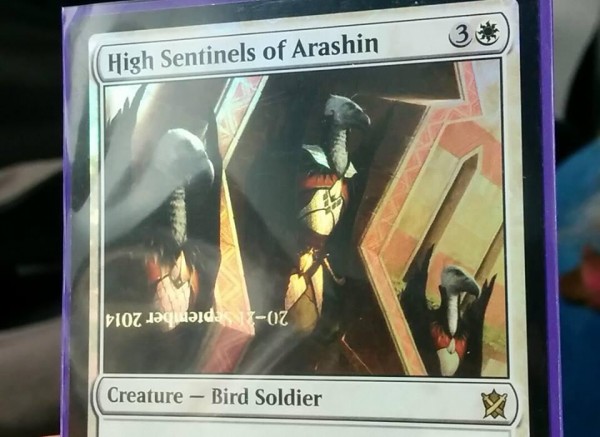 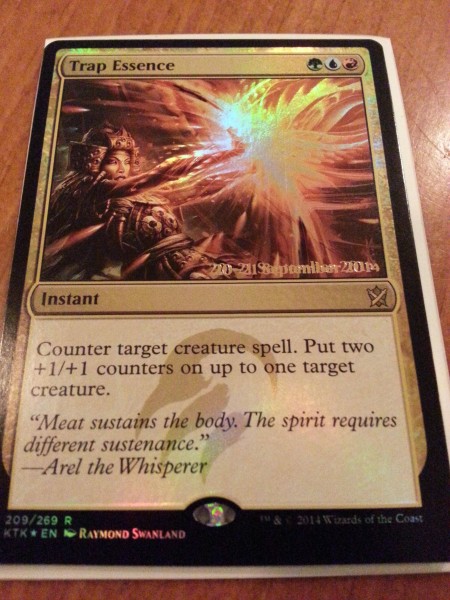 This particular misprint can also occur on regular cards (though obviously not the date stamp) now that rares have the secondary "foil" stamp in the border. A lot of these have popped up with the stamps missing or being "semi-stamped." These errors do seem to occur more often than some of the other errors, most likely because this stamp was a later addition to the manufacturing process so it may not be as well-vetted in the process as a whole.

These types of errors occur when something goes wrong with the inking process. The more pronounced the error, the more desirable and valuable it is to a collector. There are all manner of things that can go wrong in this inking process so typically they aren't classified any deeper than just "inking errors." 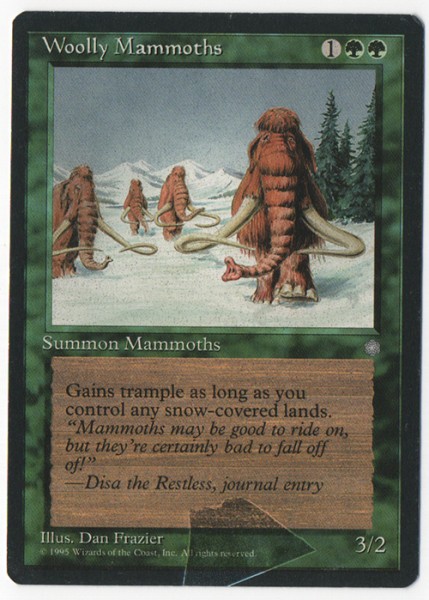 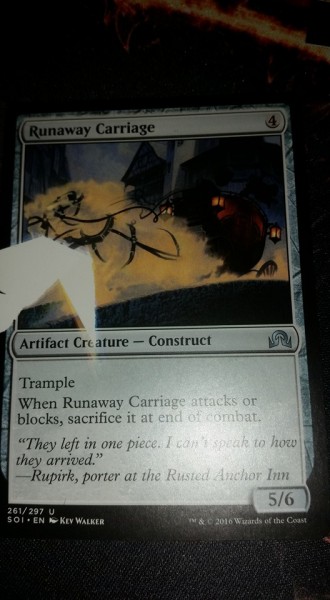 These tend to fall into several categories and the prices can vary rather wildly. The key thing to remember is that miscut cards are very desirable to a small subsection of Magic players. The best place to find them is in the Misprints and Oddities facebook group. 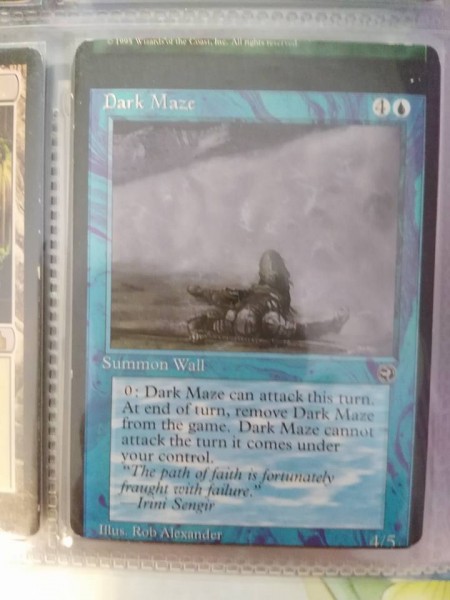 There are some collectors who try to get as much of the miscut sheet as possible and may pay a great deal to get the few pieces they are missing. Other times you may only find a few people even remotely interested and the value will be nominal. It's important to note that there are a ton of Magic cards in which the frame is slightly shifted or askew. Most collectors don't count these---in fact, many don't count it unless you can see part of another card, or even better, the edge of the print sheet itself.

It's also important to note that NFC (or Not Factory Cut) cards can often look like shifted images too. Uncut sheets have been given out as prizes for a long time and there were people who got these sheets and cut them themselves (often skewed) to then resell the cards at a premium.

This has happened a lot with Revised cards and many collectors will assume most Revised miscuts are in fact NFC. However, if the other face of the card looks normal, that's an obvious way to show it is in fact a true factory miscut and not an NFC.

This type of miscut is a card with pointed or square corners. Sometimes it's one corner and sometimes multiple corners. 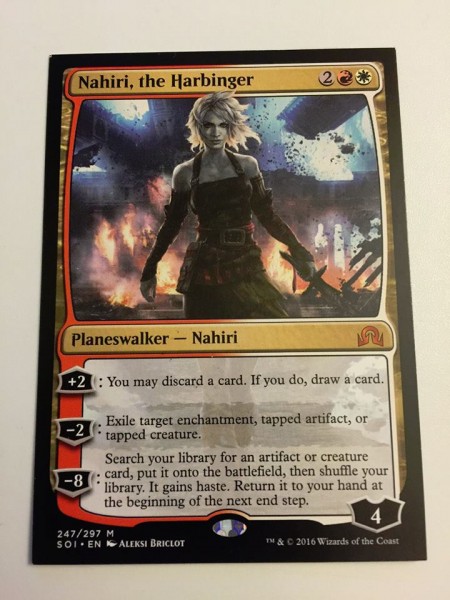 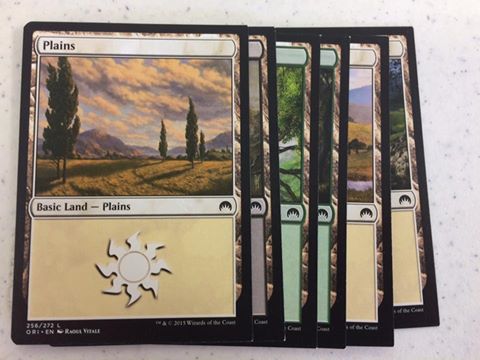 Again the value on these tends to vary a great deal with the card itself.

Crimps occur when a card is shifted during the packing process. For most crimp collectors the bigger the crimp the better. 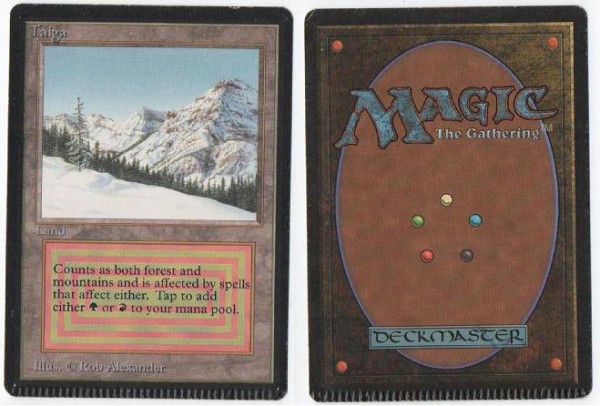 Crimps can occur in any direction, though as far as I'm aware of no card has been crimped twice (mainly because the reason it's crimped is because it became askew during the packing process and wasn't seated in the pack properly).

Most crimps occur on the bottom or top of the card as that's where the pack crimping takes place. However, there are some vertical or corner crimps (see below). 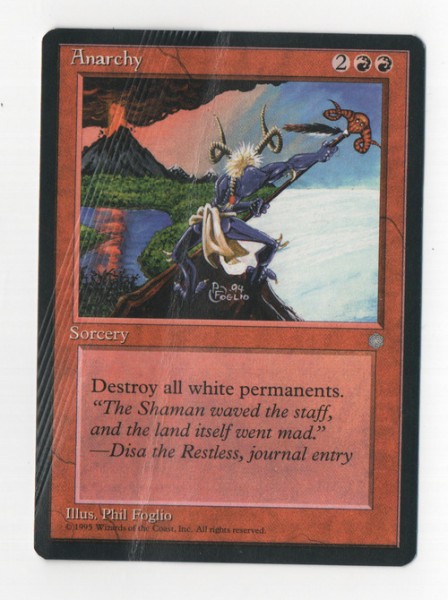 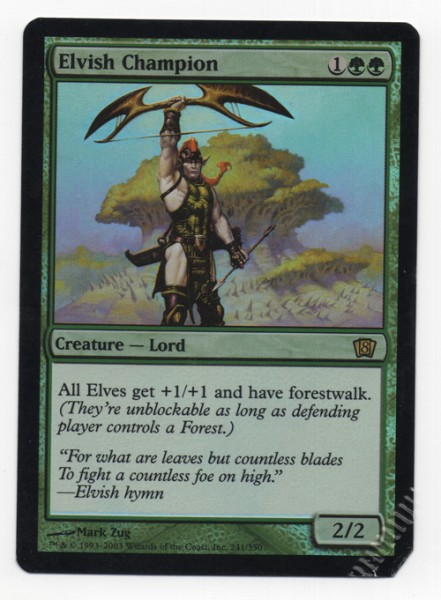 Hopefully you learned something new about all the types of Magic abnormalities and now have some additional resources when you come across something different.

I really can't stress enough that many of these oddities are extremely rare and pricing them is difficult (especially when it's possible no two are alike). If you happen to find any of these, please consider getting opinions on prices before unloading them to the first bidder.

Any truly one-of-a-kind item can potentially be worth a lot, though conversely every minor misprint/oddities isn't necessarily super valuable. So when it comes to this type of thing research and knowledge is very important.