About two weeks ago I got an e-mail from QS founder Kelly Reid. Kelly had noticed that buylist prices on Sanctum of Ugin had increased, though the market price hadn't moved much. He wanted to know my thoughts on the card, and also had some thoughts on an Emerge deck that he wanted to bounce off of me.

The deck was built around consistently casting a giant emerge monster on turn four, and Kelly had taken a largely stat-driven approach to his build.

The notion was interesting, though ultimately I didn't have a lot to offer when it came to statistics, as my thoughts on deck-building are more theory-driven. The numbers all looked very good, the deck was like, 90% to deck x, y, and z by turn q, but I just didn't know what that meant beyond an abstract consistency.

My critiques of the deck just didn't have much to do with these percentages. My comments looked like this:

Basically, that math was neat, but my brain functions on theory. There are a lot of great mathematicians playing Magic, but I've spent my time studying philosophy. I told Kelly that I didn't have much to offer outside of theory, and he asked how I defined "theory" exactly. I hadn't previously taken the time to hammer down a definition, but I had this response for him:

"I suppose I don't have a rigid definition of theory. I generally use it when I refer to thoughts about how the game works. For example, instead of mathematically getting into setting up emerge, I start with the idea that a three-drop lets me emerge on turn four and that value three-drops make the most sense as I have to sacrifice the creature. I think about what my mana curve needs to look like to function relative to what I expect to play against and flesh things out in a way that makes sense contextually in the format and coherently within the deck.

For building the G/B Delirium deck that I posted, it seemed very important to me to have a lot of enablers among a lot of different card types. I knew that the deck couldn't win quickly, so efficiency and scalability were both very important---the deck needs to play to the table fast to not get run over but also can't win fast so it can't just have a horrible late game.

I'm more often limited by the availability of cards that are actually playable for a particular role than I am by trying to cut it down to 8-12 of a particular type of card (one-drop, removal spell, etc...).

A card that I'm considering bad until proven good on the basis of theory is Hanweir Garrison. It looks great for a red three-drop and it combos with Thalia's Lieutenant. That said, the mana for Boros aggro, especially considering that the deck wants a bunch of one-drops, is problematic.

Even the act of putting more three-drops of any kind into Humans slows the deck down and makes Reflector Mage much more of a problem. Alternatively, the new Thalia allows the deck to stay mono or mostly white, and while it can get Maged, it has significant upside against blockers in general and even will tap said Mage so that your other critters can attack on your next turn." 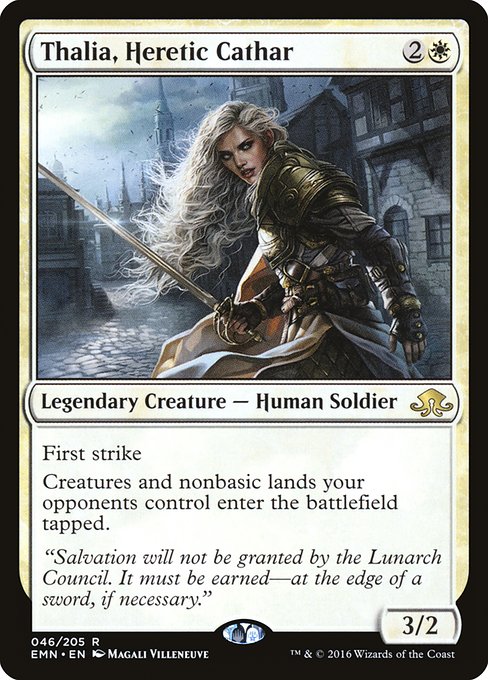 From here we agreed that this would be a great topic for an article, and as such I would like to delve deeper into my card evaluation process, providing context from Eldritch Moon. The first step is to establish in very broad strokes whether or not a card is playable.

In first-blush evaluations it's better to rule too many things as good than too few, as once you think something is bad you'll find yourself ignoring it as more information pours in. You'll notice that in a lot of my spoiler articles I try to think of ways that a card could become good. A primary example of this is looking for delirium enablers in Eldritch Moon, as there's not much in the way of delirium cards that are good if delirium is difficult to enable.

Clearly most cards aren't going to see competitive play, though I try to give anything that fits into the following categories a second look:

Fits into an Existing Archetype

The one is fairly obvious, and it is way more likely when it comes to the second set in a block. There's an existing deck that is putting up numbers and it gets a new tool. Cards like this will generally be easy to identify, and will demand high pre-order prices, which makes them poor targets for pre-order speculation.

Sometimes the evolution is less obvious, and you can find something that others failed to see. Everybody knew that Spell Queller was going to slot into Bant Company, though Jack Fogle's inclusion of Elder Deep-Fiend in his build was rather innovative.

At any rate, cards that fall firmly in this camp will generally both be obvious and decline in price after pre-order season. Take Thalia, for example. Thalia pre-ordered for about $9 and is currently selling for $5-6. Hype for these cards is easy to digest, which makes it difficult to speculate on such cards.

Something that you'll see happen a lot is that a card with a glutted CMC will get spoiled and there will be hype that only ends up leading to the card's price crashing and disappointment. Hanweir Garrison, for example, looks great with Thalia's Lieutenant, but Humans isn't looking for three-drops.

Honestly, it seems to happen to three-drops more than any other mana cost. Don't get fooled by new toys that fit in on the wrong spot on the curve. The last thing that we need is a four-mana delirium enabler.

These cards also have a way of generating inflated pre-order prices, but where you can profit is by identifying them earlier than others. The best way to identify these cards is by asking yourself what criteria will make the card good.

A good example from EMN is Ishkanah, Grafwidow. Ishkanah sucks when you don't have delirium on, and is a great rate when you do. Ishkanah had a significant window where it pre-ordered for $3, and if you were willing to bet that they had to make delirium easy-access by turn five then that was a very easy buy.

Ishkanah has cooled off, but it saw a window of a $10+ market price once people started believing in delirium, or rather that having delirium by turn five was reasonable.

The more obvious role players tend to be more difficult to get in on the ground floor with, and as such Grim Flayer and Liliana, the Last Hope saw a lot more hype when initially spoiled.

Grim Flayer has the feel of a pushed card, which once again makes its hype more digestible. What you want to look for is more subtle elements of new archetypes. It seemed clear that Liliana and Grim Flayer would have some kind of home, though initial prices for them were too high without the rest of the deck being convincingly fleshed out---again going back to the question, "what will make this card good?

Of course, you have to be a lot more careful when it comes to new archetypes. You have to both determine that the archetype can stand up to existing archetypes in addition to being competitive against whatever else the new set brings. First you have to pass the existing format's "tests," which for Standard means not getting run over by Humans and not being horrible against Reflector Mage. Then you have to determine whether the new set adds any tests to the format.

An interesting card from EMN is Splendid Reclamation. A Splendid Reclamation deck would presumably be great against Reflector Mage and could certainly support the requisite removal to beat Humans. It seems like the sort of card that could be built around, though ultimately the card really suffers from the existence of the obviously great Spell Queller. Sam Black had a really cool list using Reclamation that he posted, though this weakness is extremely significant. The card fails the Spell Queller test.

Along these same lines, Rattlechains was a card that was just waiting for support, and as soon as great spirits started being spoiled it unsurprisingly saw a good amount of growth.

Both Fits an Existing Archetype and Spawns a New Archetype

This is the sweet spot, because even though such cards end up being hyped, demand ends up being very high. People trying to play the old deck need to update it, and people trying to build the new deck need the new cards. Simple enough. Often enough though, the community at large takes some time to recognize cards that fall into this camp.

Let's talk about Spell Queller some more. When it was first spoiled, some players were thinking "Spirits!" while others were thinking this card was going to ruin Collected Company mirrors. If memory served, the card opened at around $6, and if you were operating under the belief that you need this card to play Standard rather than "deck x" then you would be very happy to see that your copies have appreciated to $14.

I still see Elder Deep-Fiend as this kind of card, though it hasn't come to fruition just yet. As such, it should perhaps go in the following category:

Cards Somebody Smarter Than Me Will Break

The best example in recent memory of such a card is Cryptolith Rite. I wasn't about to build a great Cryptolith Rite deck, but somebody was. These are often the most difficult cards to identify, at least for me, but often enough if a card has a reasonable mana cost and an effect that looks like it could theoretically break a game open, it's worth a look.

Splendid Reclamation looked like that card from this set, though ultimately being mindful of the Spell Queller test turns me off from it at this point. A deck could still exist, in particular if it's great at killing three-toughness creatures, though I'm not going to be the one to build it.

$2 is a little steep for such speculation on a regular rare, but you get the idea. You're not going to know how everything plays out, but you can at least identify that a card like Splendid Reclamation has the potential to make an obscene amount of mana for the small investment of 3G. 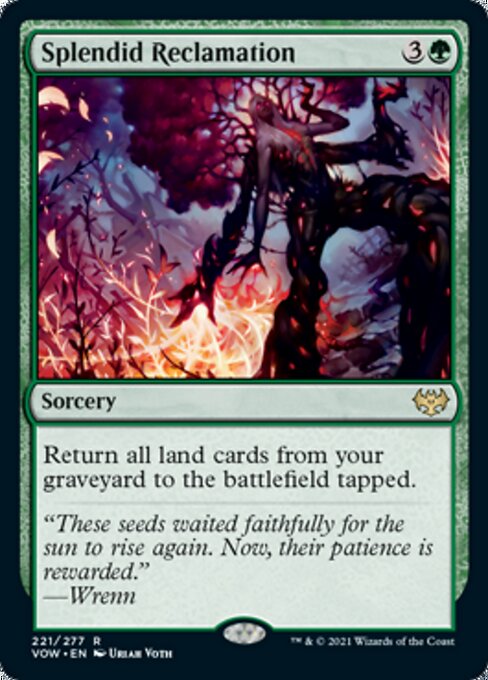 That's a lot to take in, but this should be good text to reference when next spoiler season rolls around.

It's tough to balance looking for cards you can see working in a specific way with cards whose role you're unsure of, but the broader your scope the better your odds of success. Speculation is all about finding things that are undervalued, and finding what is undervalued is a matter of knowing how to evaluate them properly.

As we approach Pro Tour Eldritch Moon, I'm quite confident that the set isn't figured out just yet, and while Spell Queller is the truth, I expect more cards from the set to have breakout performances. Specifically, I'm looking at Grim Flayer, Elder Deep-Fiend, and Splendid Reclamation.