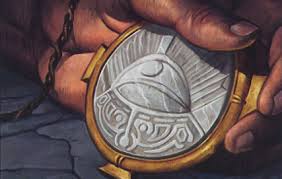 I don't know how much it's worth reading into this, but it is worth reporting that Amulet of Vigor has gained a small amount of value over the last couple of days. The card is still played in a deck that can only be referred to as a shadow of the old Amulet decks, though the recent growth is likely speculative buys pertaining to Splendid Reclamation. 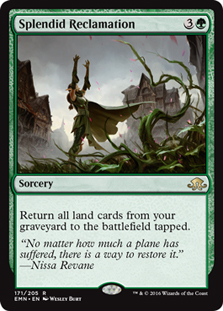 I haven't seen a list for such a deck, but a graveyard full of Mountains and Valakut, the Molten Pinnacles can sure get an opponent dead. As for why such a deck would need Amulet of Vigor, well, that's beyond me. With Amulet you can get back a bunch of bouncelands at the same time in what would be about the best ritual ever, so there could be something to explore there. This would give you mana to flashback some Faithless Looting and whatever other thing you can cast from a graveyard that you desire. Again, I don't know what such a deck would look like, though the potential for Splendid Reclamation to be a Scapeshift-like spell that doesn't require you to control seven lands sounds pretty scary.

Whatever such a deck would look like, one thing to like about it is that Splendid Reclamation beats Grafdigger's Cage. Cage is frequently the graveyard hate of choice as it deals with Dredge and Collected Company, and as such a Splendid Reclamation deck could take a Modern event by storm. I definitely don't fully grok Amulet of Vigor hype, though there could be something there. Or maybe it's just a Commander thing. Who knows.