I often get asked, "How do I build a Modern deck cheaply?" Or "on a budget." Or any of a plethora of other caveats that basically boil down to "less than retail." Modern is something of a double-edged sword when it comes to the budget-conscious player. The upfront cost is substantial, and most people don't have hundreds of dollars sitting around waiting for a hobby to be sunk into. But once you make that initial plunge, you get to reap the rewards for years. Barring a banning, or some extreme metagame shakeups, if a deck was viable once it likely will be in the future. So how do we defray those initial costs to buy into a deck? 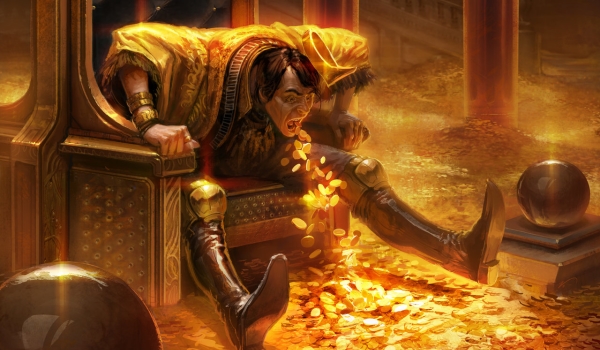 This is a very deep topic, and perhaps I can go into more detail in future articles. For today I want to go over some basic tips to follow as you're picking up staples for a new deck. Keep in mind that these strategies are predicated on patience---if you absolutely must play that shiny new deck tomorrow, you're probably going to have to shell out for it. That said, there are a lot of ways to reduce costs. These are the steps I personally use.

Pick a deck you want to build. It seems pretty obvious but I see so many players without a clear plan of what they even want to play. Maybe you own a few Mox Opals and want to play Affinity but also own some Snapcaster Mages and wouldn't mind playing a blue deck. Two Spell Snares, an Arcbound Ravager, a Liliana of the Veil, and a Kolaghan's Command later you have a lot of money in cards and no deck.

If you don't own any Modern decks it's really important to have a clear vision of what your end goal is before you start. It might make the most sense before even starting to make the investment to play a friend's copy or proxy it up and play some games with friends. Don't fall into the trap of investing tons of money into something you won't even enjoy.

Modern cards don't usually get cheaper over time. Without any reprints, a card can quickly climb year after year. Even the commons are destined for rising prices.

While linking you the graph of Glistener Elf might not seem that daunting, much more expensive cards share the same curve. Getting the "cheap stuff" out of the way early is the most important way to keep a deck's cost down.

Last year Tarmogoyfand Dark Confidant were reprinted again in Modern Masters 2015. Did you notice what happened to the other cards in the Jund deck?

Two of the cheaper lands in the deck saw huge growth almost overnight. Even a common with multiple printings, Terminate, shot up over 500%. When the price of Tarmogoyf and Dark Confidant dropped, it let the other staples gain value because people suddenly needed them. We can see from the price graphs that it's not a malicious buyout because the price of the lands almost immediately leveled out and continued to grow slowly.

Go look at your target decklist, find all the cards under $5, and just buy them. Don't wait because the longer you procrastinate on this the worse it gets.

Conspiracy: Take the Crown just hit the shelves, bringing with it reprints of some notable Modern staples. We don't have enough data yet to see the price movements on these new cards, but we can get an idea of their future by looking at Eternal Masters. In a few months Conspiracy reprints will be following a similar trend.

Heritage Druid might continue to drop from here and maybe we'll see the lowest points in December. But if you've been looking to get into Elves for a while, now is close to the time to buy Heritage Druid. We don't have quite enough data on this graph so let's take look at a staple reprinted last summer.

Noble Hierarch was reprinted in the summer (right before Magic Origins) and bottomed out in December before climbing back up. What am I expecting to happen? Pretty much the same thing with Conspiracy: Take the Crown and Eternal Masters cards. You need Inquisition of Kozilek? Buy them in December if you can wait.

It's scary to look at the price of Snapcaster Mage or Liliana of the Veil and try to figure out how to afford them. Many players make the mistake of assuming the place to start is with these cards and work their way down. It makes some sense, of course. Get the hardest-to-get cards and then the rest should fall into place more easily.

Well, as you can see from the charts above this thinking actually ends up costing you more money because too many people assume this is the way to do things. These cards are very often on Wizards of the Coast's radar for reprints. If you're worried about a reprint, wait for the product announcements every six months. We'll find out in the Fall if we're getting a Modern Masters 2017. If we are, it will presumably include high-value reprints from original Innistrad block (since Modern Masters 2015 stopped with New Phyrexia). You should plan your deck purchasing around such information.

This is a tough topic to talk about with exact precision. Most of it comes down to feel but the gist is some cards are just less likely to be reprinted than others.

But in the end, Wizards of the Coast does whatever it feels like, whenever, so it's not an exact science. Inquisition of Kozilek was expensive and specific to a plane but ended up in Conspiracy: Take the Crown.

It might be easier to illustrate my point by taking a look at Thomas Smiley's Bant Eldrazi deck that he used to win the Star City Games Open in Somerset. Here's how I would approach buying this deck if I was interested in it at this time.

First you have the cards unlikely to be reprinted due to their age. Bant Eldrazi has a bunch of cards printed in the last two years in unlimited-print-run sets:

I wouldn't pick up all of these immediately (more on this below). But I would be aware of all these cards and look for opportunities to snag them, especially in trades if possible.

Some other cards in the deck, while expensive, have the potential to be seen another time soon. I'd keep an eye on WoTC's announcements and budget to pick these up if and when they see a reprint.

So here's my overall approach to buying into Bant Eldrazi. I would begin by focusing on the lands and the new creatures. Windswept Heath has recently left Standard and is the cheapest it's ever been, whereas Eldrazi Temple is the kind of card that could get very expensive like Blackcleave Cliffs. I want both of these cards as soon as possible. Noble Hierarch is the kind of card that could burn you if they reprint it abruptly, but it isn't a shoe-in for another Masters set.

You can wait until Spring of 2017 to buy the Eldrazi creatures themselves (Reality Smasher, et.al.) because that's when they're going to leave Standard and be at their cheapest. That being said, I think they're extremely difficult to reprint unless the colorless mana cost becomes more common. Note that the Magic storyline has been saturated with Eldrazi of late, and Wizards is probably not returning to them for a bit.

Bringing It All Back

While it's not really possible to buy a Modern deck cheaply without a lot of patience, there is certainly a way to spend your money effectively and efficiently to avoid the prohibitive costs of some Modern decks. Ultimately, however, there is no foolproof way to pay nothing for a Modern deck. You have to weigh the opportunity cost of not owning each card against the savings you get from waiting for a reprint.

10 thoughts on “Smart Planning: A Guide to Acquiring Modern Decks”