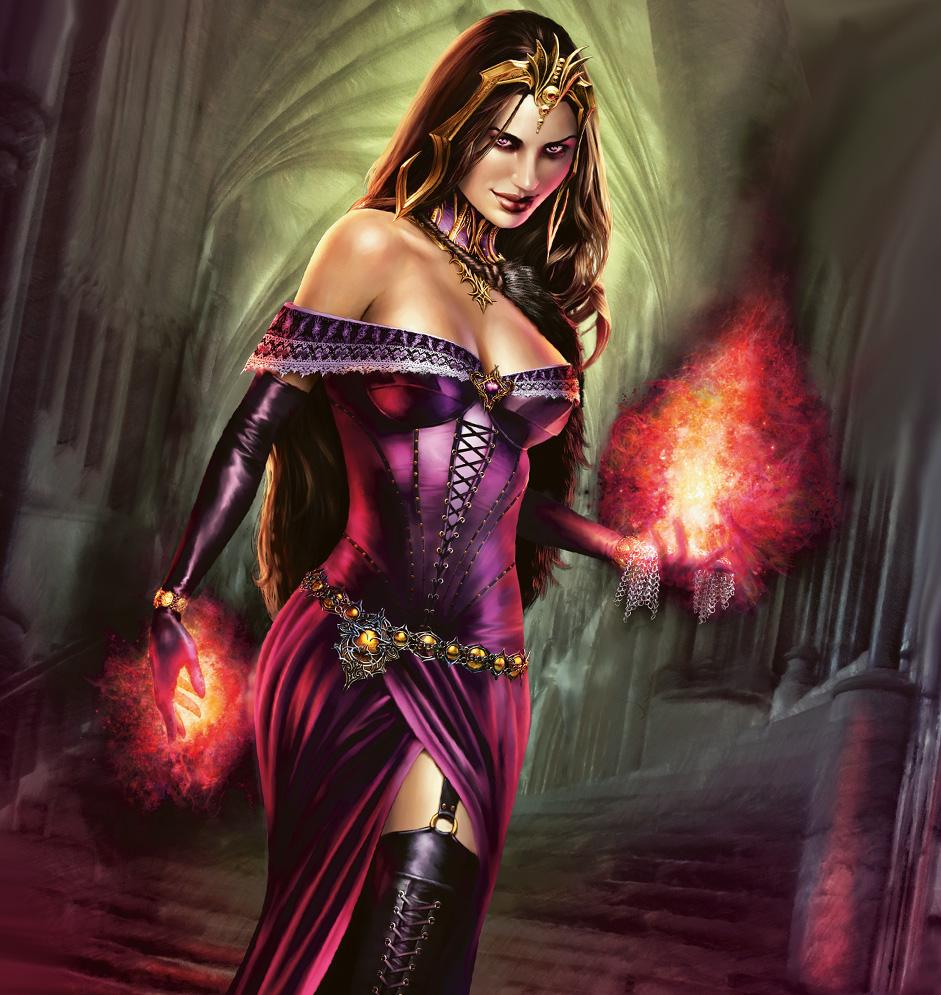 Welcome back, readers! Today's article continues my series on concepts that will build a strong foundation for any speculative endeavor. The previous ones can be found here:

Spread is the percent difference between the sell price and buylist price. Spread is typically calculated using the following formula: (Sell Price - Buylist Price) / Sell Price. You can see it when you use QS's Trader Tools software. As shown below, the spread on Liliana of the Veil at Isle of Cards is 25%. 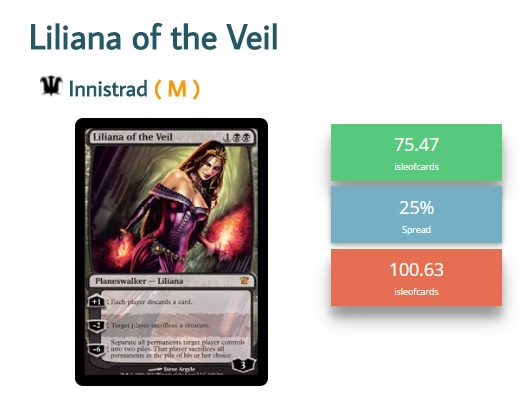 Of course, this is just one way to calculate the spread, even if it is the most prevalent. Here we're looking at the sell price from just one entity---a fuller picture can be seen looking at spreads across different sellers. Here are the numbers Trader Tools is showing right now for Liliana of the Veil:

To find the absolute lowest possible spread, we could take the lowest sell price (Isle of Cards) and compare it to the highest buy price (SCG/CFB/CSI). In this case this calculation yields a spread of 24.53%.

At first glance the spread might seem like a footnote that isn't relevant to speculators. After all, why should I care what a store is going to sell the card I buylist to them for if I have no intention of rebuying it back at a loss?

The reason we care about monitoring the spread so much is that the spread represents the confidence store owners have in the card's price. This has obvious applications for future purchases and decisions about whether to sell in the first place.

Above is the historical price index of Liliana of the Veil (also found on Trader Tools). Now I wouldn't be surprised if a lot of people see this as just more "random data" offered by Quiet Speculation, but it's more significant than that.

If store owners are confident a card will retain its price or go up they are more likely to buy extra copies. The more confident they are that it will go up, the more copies they want to have now so they can make a higher profit later.

On the flip side if store owners think a card's price will go down they don't want to buy extra copies at a competitive price. They drop their buy price either to discourage people from selling them copies (and not tying up capital in cards they feel will lose value), or to make sure they don't buy higher than the projected near-term value. If a store thinks a $50 card will drop to $30, they want to make sure they are buying them for less than $30.

Another critical point to consider is that buylists are dependent on the competition, but not exclusively so.

On the one hand, smart store owners are going to check their competition's buylist in order to compete on pricing. If my competitor is buying Liliana of the Veil for $55 and I don't have any in stock I will likely need to offer at least $55 (if not more) to make sure I get copies as well. Otherwise all the players who shop around will just sell to my competitor. Thus my price is dependent on my competition.

However, if I don't need any copies of Liliana of the Veil, then I am free to offer whatever I want (though it's important to keep in mind how that will affect those who would sell them to me). Thus my pricing is also independent of my competition as my needs may be different than theirs.

I bring this up as a segue into the next part of the historical price graph that I want to discuss, which is the difference between buylist and buylist average. I call this the buylist spread.

This is calculated similar to the regular spread: (Store's Buylist - Buylist Average) / Store's buylist. Here are the buylist spreads for Liliana.

When the buylist spreads are close together it means all the competing stores are in agreement about a card's price vs. demand. What's interesting is when they vary by a significant amount. When this occurs I see one of two explanations.

While it's not always easy to figure out which one of these two possibilities is at work, the second one tends to have telltale signs. Obviously, if a card was banned recently then you want to unload it ASAP to lose as little as possible. If the card hasn't been banned or reprinted, you can review the card's performance in the metagame.

Our sister site, Modern Nexus, tracks metagame information for Modern. They recently published this metagame breakdown for the month of July. 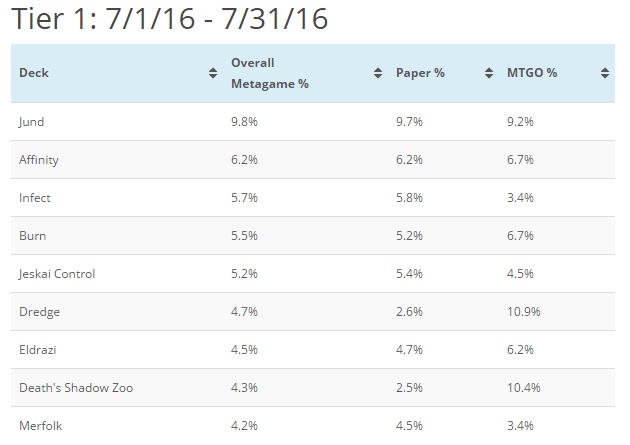 The first thing to take away is that Jund is almost 10% of the metagame (a huge amount in Modern). This is significant for Liliana of the Veil, which is typically played as a four-of in Jund.

Just as important we can also see the metagame changes from June to July. 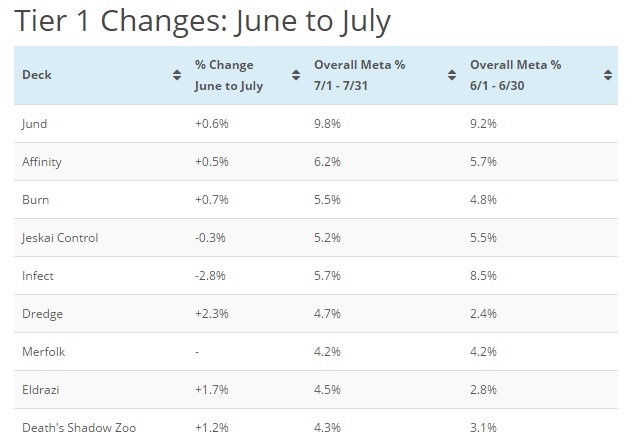 What we see is that Jund as a deck increased in the metagame by 0.6%. Granted this doesn't seem like a whole lot, but it does imply that we should see an uptick in demand for Liliana of the Veil simply because more people are playing it. She ends up at #17 on the most played cards in Modern at this time according to MTG Goldfish. (Editor's note: Since the time of writing, Liliana has jumped to the #12 spot.) 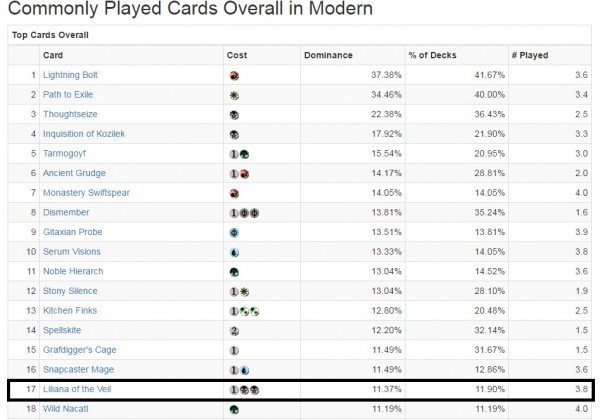 If Jund, and Liliana as a consequence, begins to see less play in Modern, we may see her price dip. This is pretty easy to understand. What the relatively low spread indicates is that stores believe, on average, that Liliana will continue to be valuable.

In the case of Liliana, this is a simple conclusion since it's been a staple more or less since the introduction of the format. Where things get murkier is with less-proven cards or Standard staples (which on average almost always post higher spreads than eternal cards).

Monitoring spreads can help you keep track of where others see the price moving in the future---and inform when an opportunity may arise if you disagree with the common assessment.

Understanding why buylists differ is an important skill set to develop as a speculator. It can help you determine whether you really do want to buylist a card or not. Sometimes you just need the money and that's okay, but when it comes to investing (of any sorts), understanding where an investment is going, and why, is where the real money can be made. Reviewing card spreads and buylist spreads is one method to approach this.

One thought on “Insider: A Strong Foundation – Spread”