Below are the total set prices for all redeemable sets on MTGO. All prices are current as of August 8th, 2016. The TCG Low and TCG Mid prices are the sum of each set’s individual card prices on TCG Player, either the low price or the mid price respectively. Note that sets of Theros (THS) are out of stock in the store, so this set is no longer redeemable. 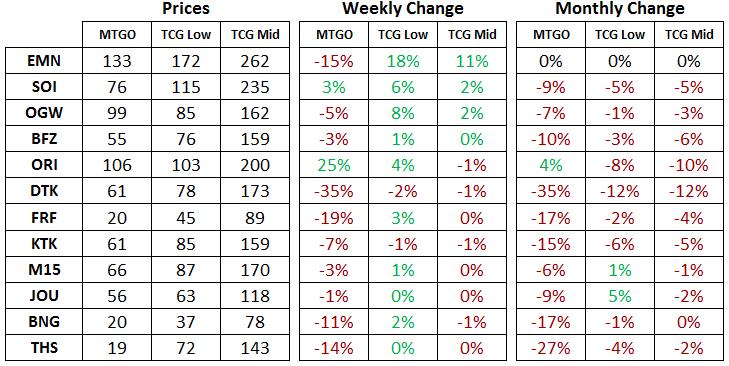 Flashback drafts are on hiatus for the next week as the focus shifts to the new Limited environment with the introduction of Eldritch Moon (EMN) to Shadows over Innistrad (SOI) draft and sealed deck. Flashback drafts will return with triple Zendikar (ZEN) draft on August 17th.

The results of Pro Tour Eldritch Moon are in and it has ushered in a new Standard format where Bant Company and G/W Tokens decks have been relegated from their previous perches. The dip in the price of Collected Company from Dragons of Tarkir (DTK) corresponds both to this change and to the pending rotation of DTK and Magic Origins (ORI) out of Standard.

While mostly above 20 tix in recent months, this card dipped as low as 12 tix over the weekend. Collected Company is a Modern staple, but it's got further to fall as Standard trends away from it and rotation looms. Speculators and players alike should keep an eye on this card and look for a price bottom in October for a good opportunity to pick it up.

Elsewhere, Jace, Vryn's Prodigy from ORI has seen a resurgence in the past week, adding about 20 tix to its price in that time frame. Nissa, Vastwood Seer has also moved up sharply. The jump in the set price for ORI this past week is directly attributable to the price changes on these two flip planeswalkers.

Although we might not be at a near-term peak on these cards, players with playsets and speculators with a stash of these cards should strongly consider selling their copies in response to this price activity. Although both have seen play in Modern, neither is a staple and it's difficult to see these two cards holding their prices as they rotate out of Standard.

Elsewhere, there are lots of deals cropping up in Battle for Zendikar (BFZ) and Oath of the Gatewatch (OGW) as the results from the Pro Tour reweave the fabric of Standard. The big losers from this change include the top card from BFZ, Gideon, Ally of Zendikar and his running mate in G/W Tokens, Nissa, Voice of Zendikar.

Both of these cards are at or near their all-time lows which is typically a good buying opportunity for a card that has had success in Standard. Although a card like Drana, Liberator of Malakir might be attractive due to its low price, having shown zero Standard playability up to this point makes it far riskier than either of these two planeswalkers in my opinion.

For the newest cards in Standard out of Eldritch Moon (EMN), the time for players and speculators to be targeting this set is a number of weeks away yet. OGW got as low as 66 tix, so it's safe to say that EMN will be heading down over the coming weeks as drafters open the new set. Look to the end of September as a window to acquire cards from this set at more reasonable prices.

For Shadows over Innistrad (SOI), it's likely to see a similar price bottom, but for speculators looking to acquire large positions in cards from this set, it's a perfectly reasonable time to start accumulating. The cycle of rare dual lands from this set represent good value at current prices, and staple cards like Tireless Tracker and Declaration in Stone also look quite attractive. Patient speculators will be rewarded with higher prices on many cards from this set over the winter.

Although the next two cards are Standard-legal, it's their Modern usage I want to hone in on. The cards in question are Thought-Knot Seer and Reality Smasher from OGW. It looks like the Eldrazi have settled on the best shell post-Eye of Ugin ban, and it is in the Bant shard. Check out the most recent 5-0 build from Modern leagues.

Both of these creatures typically show up as four-ofs, and this deck is no different. It has very efficient search in Ancient Stirrings and enough disruption for a midrange deck to go the distance. EMN cards are even making an appearance now with Elder Deep-Fiend showing up as a singleton.

While everyone is focused in on Standard, it's a good time to be considering where Modern might be headed. This deck looks like a contender so far with efficient threats and a flexible sideboard. If the Eldrazi were running rampant in Standard, then these OGW rares might be priced too high for Modern speculation. But when they are out of favor in Standard and still played in Modern, then these are a low-risk pick-up looking out to the winter.

BFZ boosters continue to bleed value over time and have drifted below 1.5 tix, coincident with the 10% lower set price over the last month. The link between the set price and the price of a booster is loose, but they are related. OGW boosters dipped briefly to 3 tix before rebounding closer to 3.2 tix.

It looks like these will not be returning to 4 tix in the near-term, which makes one of my past predictions a failed one. It will be interesting to see where the price of these two boosters ends up over the winter, and this will help guide our speculative strategy down the road.

SOI boosters have jumped to 3.3 tix this week, but the long-term outlook remains unchanged. For the moment, the novelty of the new draft format is supporting the price of SOI boosters. When drafters get their fill of SOI-EMN draft, prices will fall on lower demand. We got a brief taste of where these are headed during the prerelease weekend for EMN when these hit 2.5 tix. When Kaladesh is released in the fall, I anticipate a price move back to 2.5 tix and lower.

EMN boosters are sitting at 4 tix, near to being equal to the store price in dollars. If the historical price of OGW boosters is a good guide, these will stay close to 4 tix until just prior to the release of Kaladesh. If you manage to build up a supply of these, be sure to sell them before the end of September.

As usual, the portfolio is available at this link. As I alluded to above, there are good buying opportunities in OGW right now. I favor this set over BFZ for a number of reasons.

Typically fall sets are opened the most and have a much harder time generating large, sustained price increases. The presence of the Expeditions in BFZ are also contributing to lower upside on cards from that set. This is because these special inserts are absorbing some of the value on the paper side, but are not contributing as much value on the MTGO side. The demonstrated power level of BFZ cards in Standard also appears to be lower. Add it all up, and 1 tix invested in OGW will be a better decision than 1 tix in BFZ at this time.

Not messing around with speculative picks, I have focused on cards with strong pedigree that have a good chance to see higher prices in the winter. Nissa, Voice of Zendikar, Thought-Knot Seer, Reality Smasher and Sylvan Advocate all fit the bill. I put a playset of each into the portfolio and I will continue to monitor their prices over the coming weeks with an eye to expanding my position in these cards.