Below are the total set prices for all redeemable sets on MTGO. All prices are current as of August 15th, 2016. The TCG Low and TCG Mid prices are the sum of each set’s individual card prices on TCG Player, either the low price or the mid price respectively. Note that sets of Theros (THS) are out of stock in the store, so this set is no longer redeemable. 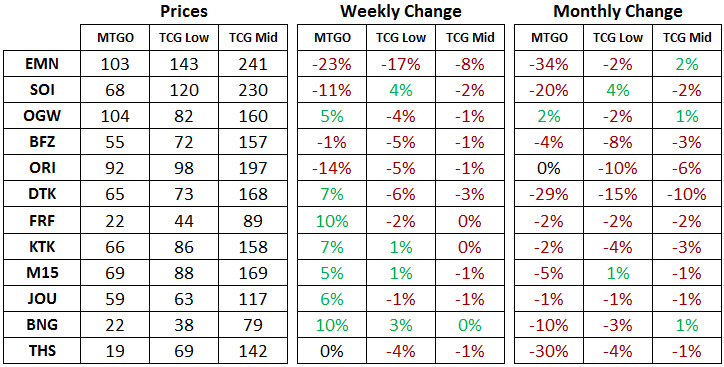 Flashback drafts return this week with triple Zendikar (ZEN) draft. This was the set that really fired up the growth in the player base as WoTC pulled out all the stops. Coming on the heels of Magic 2010, the well received core set reboot, ZEN brought with it the flavor of an Indiana Jones movie with traps, quests, and hidden treasures.

The gimmick with the treasures was a stroke of genius as WotC purchased cards on the secondary market and then inserted them into ZEN booster packs. These included the Power 9 and the original dual lands among other out-of-print cards. Topping it all off was the completion of the fetch land cycle with the printing of the five opposing-coloured lands. Needless to say, the set was very popular.

Unfortunately there were no treasures in the online version of ZEN, but the lightning-quick draft format rewarded MTGO players who could get the hang of it. This is an extremely aggressive draft format with multiple one-casting-cost creatures from the common slot that can swing for two on turn two. There are also many two-power evasive creatures in the two-casting-cost slot.

This means that Disfigure and Burst Lightning are premium removal spells and top picks in this draft format. Journey to Nowhere is another top pick, so I would definitely be looking to be one of red, black or white in the early stages of a draft. Landfall is a very powerful mechanic in ZEN draft as well, so don't skimp on land. Putting eighteen in your deck is very typical.

With Eldritch Moon (EMN) prices starting to come down to earth, and Shadows over Innistrad (SOI) exploring new lows, I thought it would be time to consider what will be a good buying window for these two sets. Below is a chart of all the Standard set prices in the 26 weeks after the prerelease.

We have complete data sets for Dragons of Tarkir (DTK), Magic Origins (ORI), Battle for Zendikar (BFZ) and Oath of the Gatewatch (OGW), but SOI and EMN are still working on their first half-year on MTGO. Using this chart, I hope to glean some idea of when to time the purchase of cards from SOI and EMN. 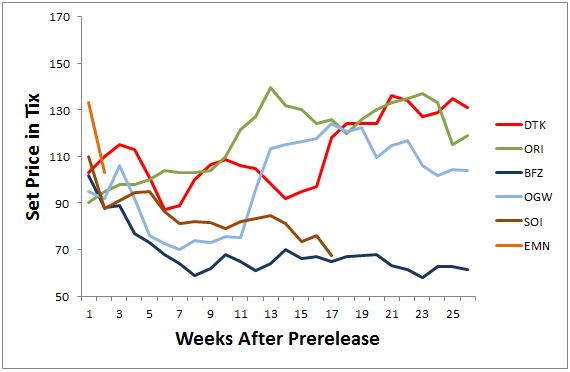 For SOI, there is no clean predictor of where the price is headed. Although DTK and SOI are both large sets and both were released in the first month of Spring, there are differences in how they were drafted. DTK was only drafted alongside Fate Reforged (FRF), so it was opened two boosters at a time instead of three. Also, ORI was released at week 14 for DTK. This is visible in the chart as DTK makes its second dip to around 90 tix as players stopped drafting DTK and switched to triple ORI draft.

With SOI, it was opened three boosters at a time and now continues to be opened with the release of EMN. It's getting close to the level that BFZ reached and if that set is a good indicator for the future price of SOI, then speculators would be best to steer clear of buying sets of SOI.

However, I don't think BFZ is a good predictor for SOI's future price, as BFZ on MTGO has the lodestone of the Expeditions around its neck. Through redemption the price of a digital set of BFZ is tied to the price of a paper set. But in paper the Expeditions have soaked up some of the value from the rest of the set. So all things being equal, the price of a digital set of BFZ is lower than it would be without the presence of the Expeditions, since these special inserts are worth much less on MTGO than in paper. SOI will probably end up performing better than BFZ, but probably not as good as ORI or DTK.

The other set to consider is EMN, and here we have the nice clear comparison with OGW. Both are being drafted in a similar fashion two boosters at a time and for a similar length of time.

Right now EMN is roughly following the trend laid out by OGW, albeit starting from a much higher level. OGW bottomed out at about 70 tix and 7 weeks after the prerelease. If EMN follows this pattern, then it will be in the middle of spoiler season for Kaladesh that EMN bottoms out. The hope will be that EMN sees a similar 50% gain after the release of the Fall set, similar to how OGW saw a 50% gain after the release of SOI.

Here's an interesting deck from the most recent Modern league results. It's an Eldrzi/Tron variant that eschews playing red and sticks to green only. Eldrazi Temple helps to power out Thought-Knot Seer and Conduit of Ruin. Instead of trying to sweep the board with Pyroclasm, this deck uses Fog to reach the mid game where an activation of Ugin, the Spirit Dragon or an Oblivion Stone can clear the board.

The deck also features two singleton cards from EMN in Emrakul, the Promised End and Geier Reach Sanitarium. This deck looks like a fun take on Tron, which hasn't been lighting up the top tables of Modern for a while. And it plays Fog! What a world.

Value continues to bleed from BFZ boosters, which constantly takes me by surprise even though I am aware of the market forces working on the prices. Where BFZ bleeds value, OGW is maintaining its value and even rising slightly this week. With the trend firmly in place, look for OGW to creep up in price over the next six weeks as drafters tire of EMN-SOI draft and look for alternatives with good value.

Those holding SOI boosters would do well to heed the lessons we've learned with the BFZ block boosters. SOI boosters will eventually suffer a similar fate as BFZ boosters, as the structural imbalance in boosters needed to draft versus boosters awarded in prizes skews the market price. These are back down to 3 tix this week.

As usual, the portfolio is available at this link. This week I put a couple of foil copies of Ulrich the Krallenhorde into the portfolio for 4 tix each. I think this card has potential applications in Standard, but that would not be the primary motivation for buying this card at this price. I am a big fan of low-risk speculation and this card fits the bill due to being a foil mythic rare.

Although the new prerelease events now favor foil uncommons as a partial bottleneck to redemption, I suspect that this is already taken into account by the market. Longer-term, I expect all foil mythic rares from SOI and EMN to appreciate in price, though it is unpredictable which one will rise the the most.

4 tix for a foil mythic rare from EMN is a very safe level to buy in at based on observing the price of foil mythic rares from SOI. Any speculator or players looking to pick up cards from EMN should feel confident that foil mythic rares at 4 tix or less are a good store of value over the long term, with potential for price increases tied to redemption, and to uptake in Standard.