Score one for the budget guys: Elves won the Star City Games Invitational in Somerset, NJ. While Liam Lonergan's deck still retails for about $800, almost half of the price is in 4 Cavern of Souls and 3 Horizon Canopy. If you're tight on cash (or waiting for a reprint, like me) you can get away with some Windswept Heaths and Temple Gardens. I played Elves this weekend to an embarrassing 0-2 drop at a local PPTQ, so I can also remind you that not every deck that wins a tournament is the best one out there. 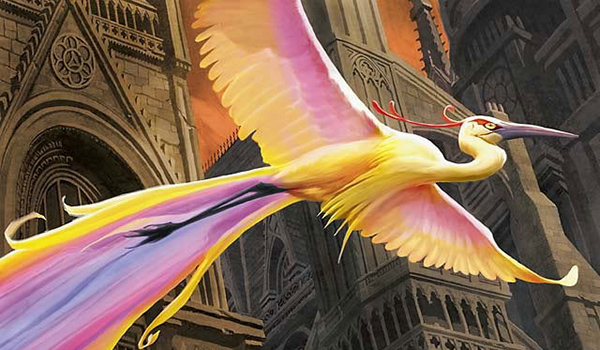 Moving forward, we shouldn't really see any big shifts in the cost of the deck. There is no untapped gem that was just waiting for a breakout performance from Elves to spike. We actually just got a reprint of the most likely card, Heritage Druid, in Eternal Masters. Due to Magic's increasing popularity over time and how long ago Lorwyn block was, those cards are more likely to be the target of vicious buyouts. Outside of Nettle Sentinel, most of the Elves deck has seen a liberal amount of reprints that has kept the price down.

Due to the split format of the Invitational, I don't suggest looking too much into the Top 8 decklists. Even the 7-1 Modern Decklists should be taken with a grain of salt since they ignore players with winning Modern records who didn't make the cut to Day 2 due to a poor Standard showing. These data are still relevant, of course. But I'm more interested in the Top 8 of the Somerset Modern Open, which was dominated by Bant Eldrazi.

In July Bant Eldrazi pushed into solidly Tier 1 territory, and it's being championed by a lot of pros. It's a bit slower than other linear aggro decks like Burn, Zoo, and Affinity, but packs more of a punch in the midgame, and the creature base lines up really well against removal in Modern. Reality Smasher in particular is a nightmare to deal with at parity---I even considered playing some in the sideboard of my Elves deck this weekend because of how miserable removal is for that creature right now. Most of the rest of the creatures are Lightning Bolt-proof, making it a real problem to deal with each threat. Being able to cheat mana with Eldrazi Temple is really just icing on the cake.

If we see more players pick up Bant Eldrazi in the wake of its finishes at Somerset, some of the core cards could jump in price. A couple were probably already due for a price correction---higher prices on those cards are likely to stick, even if Bant itself doesn't take over the metagame. I'm thinking of two in particular.

Cavern of Souls continues to push new highs. A big spike last year around the release of Magic Origins brought it from $30 to $50. After the post-spike dip it began climbing again, and now it's retailing for $55 a copy. Because it's a land you often play four or none of, it causes a huge strain on the price of decks that need it. Unlike Elves, Eldrazi feels the real pain of fighting Remand and Mana Leak---making sure your five-mana creature doesn't get countered is important!

I was hoping to see Cavern in Conspiracy: Take the Crown but now that we've seen the full spoiler I am disappointed. The most logical place I can see them putting Cavern of Souls is in a Modern Masters 2017 product next summer. The product announcement section during early Kaladesh spoilers will let us know if a redux of the popular reprint series is in the works for next year.

If I asked you which card from Modern Masters 2015 had the biggest price increase since its release, could you pick it? The one with the biggest rebound is Noble Hierarch. I was at GP Las Vegas 2015 and was able to buy a playset for $140 (or about $35 each). Now they are over $50!

It's only been a year since Hierarch was reprinted at rare and a lot has happened to make it grow. Infect has never been more popular since Splinter Twin was banned. Eldrazi adopting it to give them more chances to land a turn two Thought-Knot Seer without double Eldrazi Temple has also ratcheted up the amount of play it sees. Looking at the metagame breakdown it doesn't look like Hierarch is nearly that dominant, but I'm certain there are far more people playing Infect and Eldrazi who simply aren't winning. Noble Hierarch is the most played creature on MTGO right now, and I wouldn't be surprised if the same were true in paper. It's one of a few that really has a lot of multi-deck appeal.

I'm not sure Wizards of the Coast will be able to curb the enthusiasm for Noble Hierarch with another reprint before it ends up close to the peak of its Conflux version. I also expect more people will be interested in playing Legacy Infect because they recently reprinted Force of Will and Berserk is in Conspiracy 2. While you're still a few Tropical Islands short of a real Legacy deck, some people might decide Breeding Pool is close enough. Any more stress on Noble Hierarch gives people a real opportunity to cause a nasty spike and then a subsequent crash.

In addition to the reprint of the much needed Inquisition of Kozilek, we are getting a pretty good number of mid-cost cards that are welcome reprints. These cards should see solid dips in value once Conspiracy: Take the Crown hits the shelves. After things have settled it will be a great time to pick up copies for players who still need their sets. Each of these cards has a proven pedigree, and prices will start inching up again as years pass.

Conspiracy 2 may not have a ton of high-profile reprints that Modern players have been hoping for, but I think it will do a good job bringing down the price of the ones it does include. 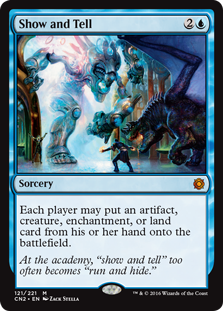 Show and Tell and Berserk will put a lot of downward pressure on the rares and uncommons in the set. Exciting chase rares like this will drive sales of packs, flooding the market with the less desirable cards that get opened in the process.

This weekend is the triple Grand Prix in Indianapolis, Lille, and Guangzhou. If a dealer is overpaying on a card we could see it fly out of stock on TCGPlayer. If you're holding out for a weekend to see what's good, you should probably buy before Thursday.

Finally, I'm still looking for more ideas on topics for this column. What topics of Modern finance interest you the most? Do you want a guide on how to get into Modern from Standard? Do you want an article on best purchasing practices? Leave a comment below on what topics most interest you, and I'll see you next week!

14 thoughts on “The SCG Elventational and Bant Eldrazi Staples”