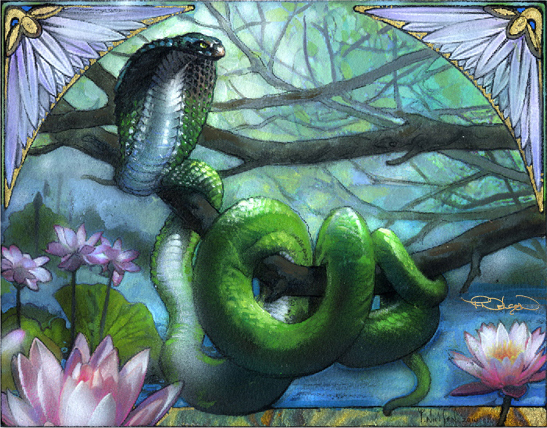 Recently I've noticed that a lot of our local players have reduced their willingness to go to major events like Grand Prix due to the high cost of entry compared to just a few years ago. This got me thinking, why are they so expensive? Do the tournament organizers (TOs) just make a killing in profits? What kinds of costs are associated with these events now?

While I accept that tournament entry fees are not really directly related to the subject of MTG finance, there have been quite a few discussions about them in our forums. This caused me to want to dig in, do some research, and see for myself.

This question is a good example of a Fermi problem. The basic idea is that if you have a difficult-to-answer question (perhaps one that can't be answered at all), you can try to break it down into parts. You logically estimate each part separately and then combine your answers to come up with a relatively accurate solution.

Today I'll approach the question of tournament entry fees in this way. We'll break down the costs associated with running a Grand Prix to get an idea of what kind of entry fee is required for TOs to turn a profit.

Unfortunately, I can't get perfect information on venue rental costs as it seems they're only available to people actually planning to host an event. However, I was able to find one venue to get a baseline idea (granted, I don't believe they've ever hosted an MTG event). Here's the pricing for the Waco Convention Center (in Waco, TX). 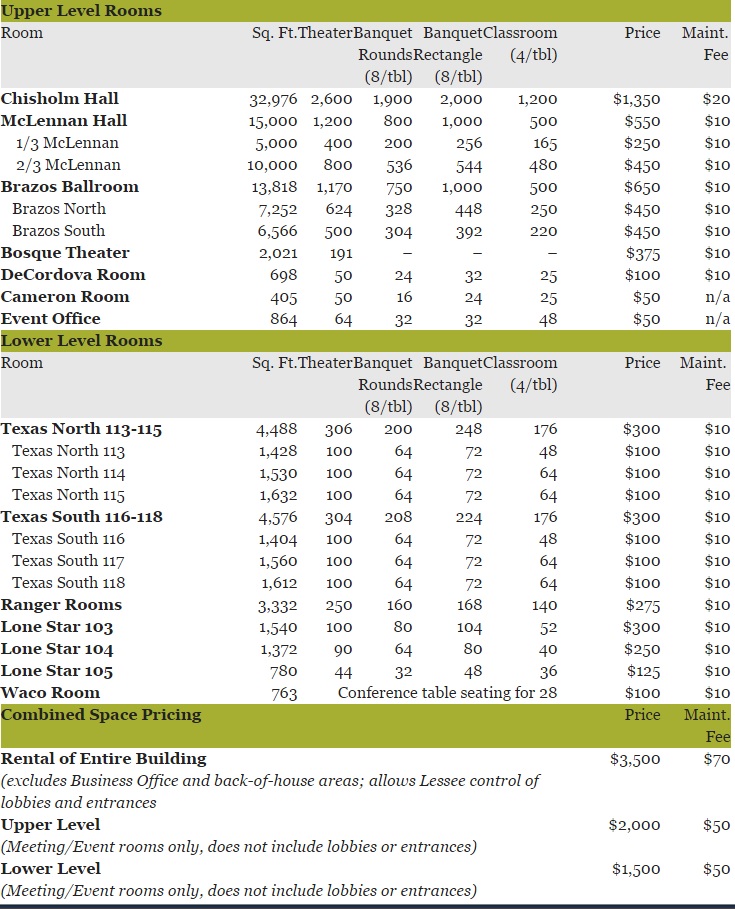 First off, the cost to rent the entire venue is only $3,500, which seems really low. We need to understand how big the facility is. We'll just add up the larger rooms (since it would be difficult to have a tournament with people reporting to 4+ rooms and awkward to staff small 100-person rooms). Thus the three largest rooms amount to 61,794 square feet.

That doesn't include the cost of chairs and tables. Again, the cost in Waco for these is: 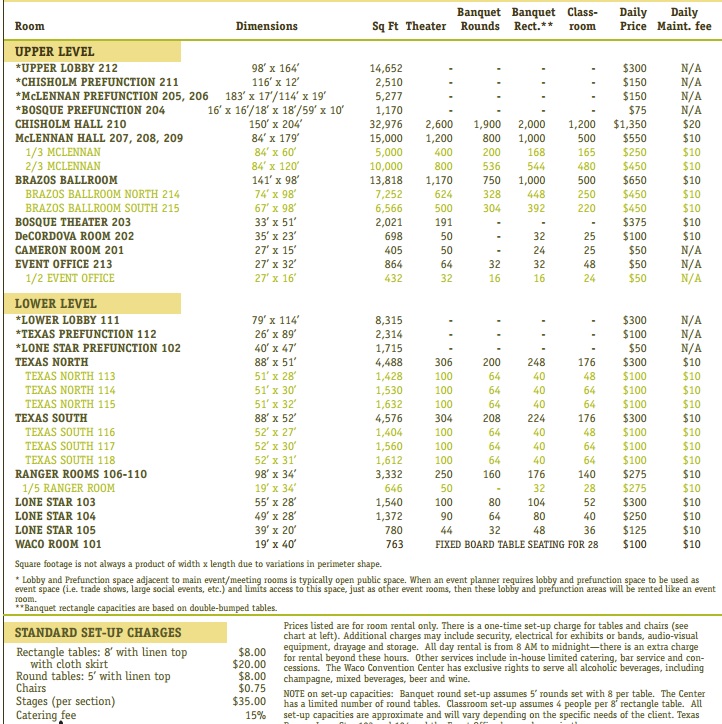 Now GP Charlotte of this year (the one with the pairings debacle) had 2400-(ish) players in the main event. It's fair to assume there were probably close to 3000 players in attendance, and that thanks to some other 4,000+ player GPs they likely rented enough chairs and tables to hold more than enough people. For argument's sake let's say they rented enough chairs/tables for 4500 players (the maximum they claimed could sign up).

Then we have judges and event staff. WoTC proposes that TOs have at least one judge per 32 players (and then additional higher-level judges based on the size of the event). Again let's assume that the TO followed this guideline. This means they need 142 judges (141 plus the head judge); we'll round this to 150 judges to include scorekeepers, etc.

I found Legion Events' old pay scale for judges. These payouts are for the entire weekend (Saturday and Sunday).

For a fair breakdown let's assume 100 Level 1 judges, 45 Level 2 judges, four Level 3 judges, and one head judge. We'll also assume the value of the sealed product at cost is $77 per box (the typical going rate for stores from the distributor).

So total judge compensation is:

There's also some support staff who aren't judges that need to be paid (typically they work for the TO). We'll estimate the cost for these people to be $1000 for the weekend.

WoTC pays the actual prize support for Grand Prix so that doesn't come out of the TO's pocket. However, TOs have to bid on hosting the GPs. This is obviously a company secret for each TO, but I honestly wouldn't be surprised if that cost was upwards of $20,000 (which we'll assume for this calculation).

Next up we have maintenance and security fees at the venue, which are maybe $500 (this is a guestimate, but doesn't seem implausible).

Lastly we have the cost of the playmats/miscellaneous items given out to players who enter. We'll assume these to be around $3.50 per player ($3 for the mat and $0.50 for other things) which is another $15,750.

So let's add up all the expenses. The total estimated expense of running a GP is $147,000 (rounded).

Now let's figure out what brings in the money.

Being the TO means you get to sell booth space to the other vendors. At GP Charlotte there were 16 vendors. I've heard it costs around $3,000-$5,000 for a booth. We'll stick with the $3,000 figure for this calculation (which is likely on the lower end). This means that the TO can generate $45,000 from vendors (assuming the TO uses one of the vendor slots for their own store, that's 15 vendors x $3,000 each).

This means that after vendor fees the TO is still $102,000 in the negative.

Their other source of income is the actual tournament entry fees. If we take the $102,000 and divide it by the 3500 actual players who showed up (rather than the 4500 that might have), we get $30. That entry fee will only let them break even, with no profit.

Now for the "what if" section. Here we'll cover what happens if we tweak our estimates.

What if the TO wants a profit margin of 25%; if so then the tournament entry fee would need to be $40.

I've heard lots of complaints about the increased costs of GPs, from friends as well as on the forums. A few articles have tried to justify the price increases, but in the end the TOs are acting like a business and if players keep showing up in large numbers to these events and paying whatever the entry fee is, they can charge as much as they think the market will bear.

One solution for this would be to open up GP bidding to additional competitors. The problem there is that the upfront cost of $150,000 is very high and some of the fees likely need to be paid months in advance (which means the TO has to shell out that money with no return on it until the event actually occurs). This upfront cost likely hinders a lot of smaller TOs from even being able to run it.

It's also very important to WoTC (and the players) that the events be run well. I've been to GPs hosted by several TOs and I can honestly say that the most impressive ones were run by Star City Games. This makes sense given the exceptionally large number of bigger events they host every year. They have a lot of practice and have likely run into most of the major pitfalls that can befall a tournament before, which means they are more prepared to deal with them.

I'll also state that personally I rarely play in the main events at GPs anymore, largely because I think the ROI is so bad. Assume you pay $80 to enter a 3000+ player tournament. You have to make Top 180 (the top 6% of the field) to come out ahead. If you don't make Top 32 (the top 1.06%) then you're still only making 2.5x - 3.125x back on your investment. Now the playmats are sometimes worth something as are the promos, but it's still a lot of money and time invested for such little gain.

Of course, if you just love playing highly competitive Magic that could easily be worth the investment. But I do find it amusing how many people I hear complain constantly of paying $70-$80 and then drop by the fifth round who then repeat the same process at the next GP.