Below are the total set prices for all redeemable sets on MTGO. All prices are current as of September 12th, 2016. The TCG Low and TCG Mid prices are the sum of each set’s individual card prices on TCG Player, either the low price or the mid price respectively. Note that sets of Theros (THS) are out of stock in the store, so this set is no longer redeemable. 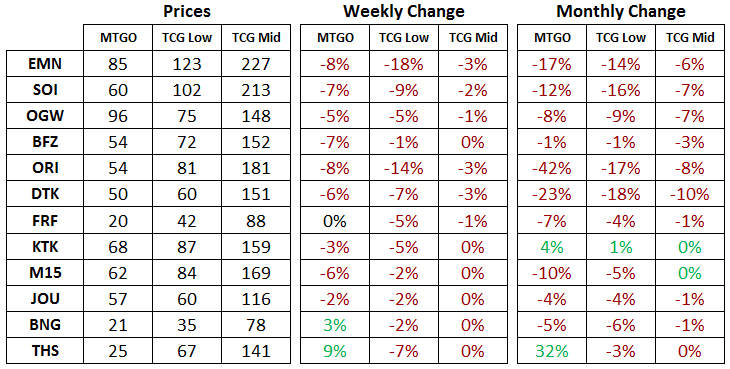 This week we are back on Mirrodin with triple Scars of Mirrodin (SOM) draft. This set introduces the infect, metalcraft and proliferate mechanics.

Notable Modern staples include the allied-colour fastlands like Blackcleave Cliffs, which has powered up Jund strategies wanting to cast Thoughtseize or Lightning Bolt on the first turn. Wurmcoil Engine is a huge colourless threat that helps Tron decks to stabilize the board and their life totals. Mox Opal is the most expensive card in the set and a key four-of in Modern Affinity decks.

In terms of draft strategy, remember that this is an artifact-themed block so it's often correct to take a slightly weaker artifact than a coloured card in order to keep your options open. The mana producing Myr are excellent picks that any deck can use. Be sure to pick these creatures up and lighten your land count at the same time. The equipment in this set are not as powerful as the equipment from the original Mirrodin, but they are often still better than the average piece of equipment we see printed these days.

Special mention should be made for the All-Innistrad Sealed Deck League, running from September 14-21. For building your sealed deck, you'll get two boosters each of Innistrad (ISD) and Shadows over Innistrad (SOI), and then one each of Dark Ascension and Eldritch Moon.

Speculators should be aware that triple ISD flashback drafts are scheduled for the end of October, so targeting Modern staples like Liliana of the Veil and Snapcaster Mage might be premature. However, for all the keen sealed deck players, here's hoping you crack a Lily! Either one!

Examining the ever-useful MTGGoldfish price charts of Magic Origins' (ORI) Erebos's Titan and Disciple of the Ring poses an interesting question. Why have the prices on these junk mythic rares risen substantially in recent weeks? In percentage terms, they are up by over 400%. Long time readers of my articles will know that this effect is tied to redemption.

However, Standard sets have another source of value in redemption. If you collect a complete set on MTGO, you can covert the digital cards into paper versions that WoTC will deliver to you for a fee. This creates a connection between the value of a digital set and its paper counterpart. The optional value of being able to convert sets from MTGO into paper through the redemption process provides price support to the digital set.

In the case of Disciple of the Ring and Erebos's Titan, these cards had next to zero utility in Standard and were the definition of junk mythic rare. They were priced accordingly in the 0.1 to 0.2 tix range in recent weeks.

Although sets of ORI have been losing value overall due to the pending Standard rotation, these cards have started gaining value to redeemers since a set of ORI can be much cheaper online than in paper.

This flow of value happens because mythic rares are the bottleneck to redemption. They are the most scarce, and redeemers need a copy of every card from the set in order to redeem that set. Price declines in Standard-playable cards like Jace, Vryn's Prodigy can't go on indefinitely even though players and bots continue to sell their copies since there is value in ORI to redeemers. As a result, value flows from the Standard-playable cards to the junk mythic rares as we near rotation.

This is an excellent strategy for speculators who want to grind a few extra tix in the weeks and months prior to Standard rotation. For large sets, the junk mythic rare price of 0.1 to 0.2 tix tends to be a safe price level for building a position. Now that value has started flowing to the junk mythic rares of ORI, it is a fine time to sell in order to capture the recent gains.

The one caveat to this strategy going forward is that Battle for Zendikar (BFZ) might see very low demand from redeemers due to the presence of the Expeditions. These valuable cards means a set of BFZ is lower than it otherwise would have been and the redeemable cards are cheap overall. This could mean a card like Akoum Firebird never goes back above 0.2 tix.

It will be worth watching as BFZ nears rotation in the Spring of 2017. Otherwise, August of 2017 will be an excellent time to scour Shadows over Innistrad for cheap junk mythic rares that are about to catch a wave of value.

As we near the rotation of Dragons of Tarkir (DTK) and ORI out of Standard, interest in Modern has been at a seasonal high with the price of Modern staples following suit. However, with Kaladesh spoilers in full swing, we are set to enter a period of price weakness.

If you look to the price of Scalding Tarn, it is off of its recent lows observed during the flashback drafts and now sits at about 30 tix. This suggests demand remains robust, but a look at Verdant Catacombs and we see the price is currently lower than at any time during the last six months.

On the whole,  I'd expect lower prices heading into October on a range of Modern staples, so if you missed out on grabbing your playset of the Zendikar fetchlands, just be patient.

The introduction of draft leagues has made a big impact on the price of SOI boosters, going from around 2.1 tix to over 3 tix this week. There are two factors at work here. The main one is the increase in demand that has occurred as players who previously weren't playing much at all have found draft leagues to be a convenient way to enjoy Limited Magic. The second factor is the prize distribution.

Previously the 6-2-2-2 prize structures awarded a skewed amount of boosters relative to the boosters needed for entry. Two draft sets to first place, plus one of each booster for the rest of the prizes. In the case of SOI block, this adds up to 7 boosters of EMN, and 5 boosters of SOI. Each of the players who won two boosters were one booster of EMN away from drafting again. This prize distribution would eat into the value of an SOI booster over time since they are relatively abundant and EMN boosters are relatively scarce and in demand.

Now if you enter the SOI block draft league, going 3-0 gives you 5 boosters of EMN and only 1 booster of SOI. This has restored balance between the prize distribution and the boosters required for entry. In the aggregate, this means that neither SOI or EMN will have a change in relative scarcity over time. The result will be that SOI boosters won't go as low as BFZ boosters have gone, and should be considered a potential buy for speculators in October.

As usual, the portfolio is available at this link. This week I exited my position in Oath of the Gatewatch (OGW) boosters in order to get liquid in advance of Kaladesh.

This was a disappointing trade overall that didn't work out. The opportunity cost of holding these boosters since April has been high, since the tix tied up in these boosters were not available for pursuing other opportunities. Not only that, moving 100+ boosters takes a number of transactions. To top it all off, the price gains I had predicted did not materialize.

This is an excellent example of drawing conclusions from past data without considering how things might be different. In the case of BFZ and OGW boosters, the addition of sealed leagues substantially increased the supply of boosters on the market. With the release of SOI and the removal of these leagues, there was no longer an outlet for this supply, and prices have drifted sideways in the case of OGW and completely cratered in the case of BFZ.

We know that these boosters acted differently due to the skewed prize distribution of the 6-2-2-2 drafts, but the available supply was a big surprise. I assumed that the slow drip of drafts would eventually remove all extra supply of these boosters from the market, pushing prices closer to 4 tix.

Also, the constant availability of flashback drafts has given an option for players bored of the most current draft formats. Without flashback drafts, demand for BFZ block drafts would have been higher. In order to purse this strategy again, I will need to identify an excellent entry price and I will limit my position size due to the uncertainty of the trade.