With Kaladesh set to come out tomorrow, we are on the eve of a possible shake-up in the Modern landscape. Still, the decklists keep coming, this time in the form of multiple World Cup Magic Qualifier events worldwide! These events are always high-level, as players fight valiantly for the chance to represent their home country on the World Cup stage. While the number of simultaneous events means there a ton of decklists to go through, one of the side effects of this type of weekend is that there are no clear "winners" to shift the metagame. So, this leaves us with the unique ability to focus on one thing, and one thing only. Decklists! Let’s get to it! 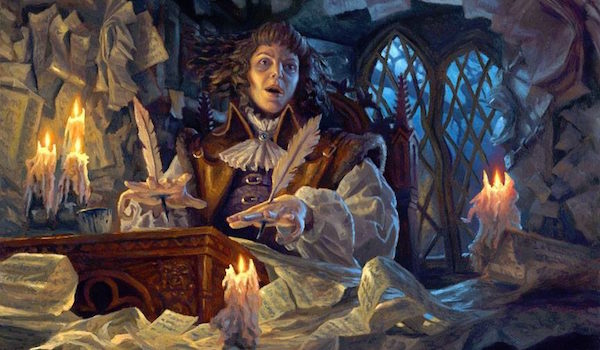 Let's get warmed up. Yes, it had a nice run at Grand Prix Los Angeles earlier this year, but Esper Mill as a viable strategy is way down there with Skred and Budget Jund. Still, Top 8’ing a WMCQ is a pretty solid performance and deserves at least some recognition! Mesmeric Orb can help us turn on delirium for Manic Scribe, and together both cards can add up to a lot of action turn after turn. With maindeck Crypt Incursion and some Path to Exile to help fight creature decks, Sven's list is tuned to buy a bit of time so as to race most of the aggressive matchups in the format. With Surgical Extraction to rip away combo pieces that have been milled over, this deck has surprising game against most of the decks in the format.

At the end of the day, however, Mill is Mill. I’ve received a bit of heat in the past for my strong opinions regarding certain archetypes, and I try not to let bias affect my decision-making process too much, but I don’t expect this performance to be a precursor of a “Mill uprising” or anything crazy. At best, Glimpse the Unthinkable is on par with Boros Charm (milling eight cards when we need to turn over around 45 is a little less than “4 damage”) but the rest of our deck is below rate. Against a field full of slower strategies or a very polarized field where we can tune our deck to beat the majority, it’s possible this archetype could see continued success, but I’m confident in calling this one a flash-in-the-pan performance.

As I’ve been harsh on RG Breach decks lately, I figure spotlighting “RG Ponza” might work to repair some of the burned bridges I seem to have developed with RG players lately. Up until this weekend I hadn’t really seen this deck before, but through my research I’ve found that it’s been putting up some results here and there on MTGO for a few months, with the first "attention" being given to it in March by a Deck Digest article on SCG, and a primer written by Matt Mendoza after he won Kansas States with it. Recently, the deck put up a few results at some SCG IQ events, and this past weekend Ponza took two strong finishes in WMCQ Canada and England.

Essentially, RG Ponza is a mana acceleration/land destruction deck that looks to either Blood Moon its opponents or power ahead on mana and deploy bombs like Harmonize and Stormbreath Dragon until it wins. Unlike traditional RG Ramp strategies that need a delicate mix of lands/acceleration and payoff cards, Ponza generally is in a good position as long as it can get ahead and stay ahead. Utopia Sprawl and Arbor Elf work to overcome the general clunkiness of Stone Rain and Blood Moon against aggressive strategies that might develop too quickly for them to be effective, and should they deploy too much to the board too quickly, Bonfire of the Damned and Obstinate Baloth do good work cleaning up the ground.

Ponza is good right now because Blood Moon is just excellent. Even though Tron strategies haven’t been putting up strong results lately, Blood Moon is probably one of the best cards in the format right now, specifically for that reason. Tron has been out of the spotlight for a while so Blood Moon has disappeared from boards, which has caused a gradual shift in the metagame towards numerous archetypes that just no longer respecting the card anymore.

Like RW Control before it, I think Ponza is a “okay” deck propped up by a few good cards. It plays much better on the play than the draw, and can struggle if it either doesn’t draw/the opponent can kill Arbor Elf or Utopia Sprawl. Still, while the format is primarily aggro decks and decks weak to Blood Moon, and while midrange is still on the decline, I can’t deny that RG Ponza is a solid choice.

U/R Bedlam Reveler taking first (and third) in WMCQ Australia should not be overlooked, especially considering the upgrade this deck will be soon receiving in the form of Spirebluff Canal. With free spells like Gitaxian Probe, Mutagenic Growth and Manamorphose to power out Bedlam Reveler, this deck has the ability to be very aggressive yet still maintain power going into the lategame. Stormchaser Mage does great work as Monastery Swiftspear 5-8, but I’m still left wondering if Delver of Secrets // Insectile Aberration could find a way in the deck. I know the list is relatively tight, but 31 spells that flip Delver is just begging to be taken advantage of.

With how mana efficient the rest of the list is, I’m wondering if Faithless Looting couldn’t just be cut. I know that Faithless Looting does good work setting up Bedlam Reveler, and flashing it back later is a good way to get rid of some extra lands stuck in our hand, but given any other option we would rather do anything else with our mana. We’re already playing one Blistercoil Weird, so it seems a quick change to fit at least three Delver of Secrets into the maindeck. Still, this deck has been actively tuned for a couple months now (since Bedlam Reveler’s release) and I think we’re on the precipice of a breakout into one of the top tiers of Modern. Keep an eye out for this one!

Finally, I’d like to take a look at this sweet Esper list from WMCQ Japan. Rather than messing around with Sphinx's Revelation or Esper Charm, Kihara instead modeled this archetype after the Grixis and Jund midrange strategies in the format. Removal, diverse threats and card advantage - this deck has it all. Where Grixis has Lightning Bolt and Kolaghan's Command, this Esper list is opting instead for Path to Exile and Lingering Souls. Backed up by a bunch of removal, Geist of Saint Traft is a hard-hitting, difficult-to-interact-with threat that attacks opponents from an entirely different direction than Liliana of the Veil, Lingering Souls and Gurmag Angler. Most Esper decks were already packing Geist of Saint Traft in their sideboard, so I like that Kihara chose to just embrace that post-board plan of attack for Game 1 as well.

There is a lot of built-in adaptability with a list like this, thanks in large part to the overall power level of its various components. When we’re packing four Lingering Souls, four Jace, Vryn's Prodigy // Jace, Telepath Unbound, four Geist of Saint Traft, four Liliana’s and five delve threats, the rest of the mix can be whatever form of disruption/card advantage/removal we desire. Kihara chose for this event to play a playset of Disfigure alongside Path to Exile (the assumption being if we can get to the midgame we should have no problems winning) but any mix of Serum Visions or more discard spells could see play given the right metagame conditions. I plan on testing this deck out extensively in the coming weeks.

This round of WMCQ events gave us a bunch of sweet new decklists to look at heading into Kaladesh. I did my best to present some of the most interesting options, but I really only skimmed the top of what is an extensive list of data out there to analyze. What did you think about any of the lists we went over today? Did I miss something you think I should be paying attention to? Let me know in the comments, and I’ll see you next week!