Hello and welcome back to another week of High Stakes MTGO!

Times are definitively rough for speculators, and for my portfolio more specifically. The changes announced two weeks ago, mainly affecting Modern at this time, combined with the usual price depreciation observed during the release of a new set, are putting my bankroll and overall speculative decisions to the test.

As judged by the Modern Staples price index, format prices have collectively dropped by about 15%. Depending on what's in your portfolio, you may have even lost more than that. Some prices are stabilizing, but different cards have completely different price trajectories.

Looking at the Treasure Chest curated card list, some cards are still losing value, such as Cavern of Souls, Horizon Canopy and Blood Moon. Others, such as Liliana of the Veil, Tarmogoyf and Creeping Tar Pit, seem to have stabilized. A third category of staples, including Inkmoth Nexus, Twilight Mire and Kataki, War's Wage, have already markedly rebounded or appear not to have reacted at all to the announcement.

More Modern flashback drafts are to come after Kaladesh (KLD) release events; Innistrad block is next. If a week of triple Avacyn Restored was not just a month away, I would be very tempted to grab a few copies of Cavern of Souls. This land is such a pillar in Modern and Legacy and certainly doesn't deserve the abrupt drop of roughly 50% that just happened in the past two weeks.

In all this chaos, Standard may be where the salvation begins. With the emergence of a new Standard environment prices are also shaping up. Many cards saw a temporary dip last week as the KLD prerelease events fired, but almost everything is now rebounding. Will we finally see Battle for Zendikar singles and full sets go up? Will Crush of Tentacles be more expensive than Chandra, Flamecaller by the end of this week?

With all this turmoil, my most recent decisions have been to cut down losses and salvage what I can from losing positions. As bad as things might be, this period of the year is still big in buying opportunities, in Standard especially—I want to have more cash available as Pro Tour Kaladesh lines up.

Let's review my moves this past week. The live portfolio is still here. 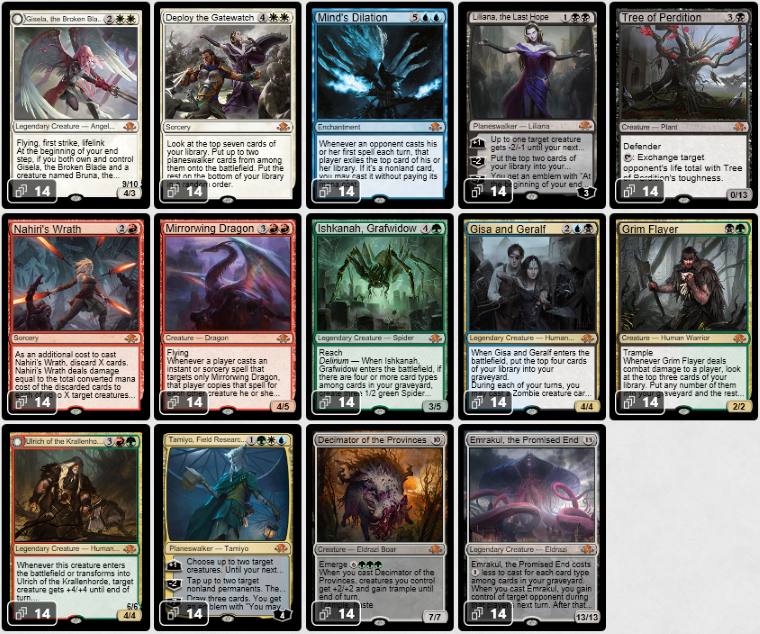 Two more Eldritch Moon (EMN) full sets purchased this past week. With the fresh tix generated from my sales, I'm likely to add a few more playsets again this week—hopefully right in time for a general price hike in the wake of Pro Tour Kaladesh.

My most recent full-set specs were rather under-performing to say the least, and I'll try to be more conservative about expectations this time around. Several EMN rares and mythics have the potential to explode, but isn't that the case with about every set? Overall I'm targeting a price in the 110 to 120 tix range. 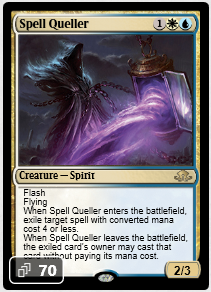 I reloaded on 46 more copies at an average price of 2.08 tix. Not the best price since Spell Queller hit 1.5 tix at the end of this past week, but its price has already rebounded to 2.5 tix. Currently, this Spirit seems to have better prospects in Modern than in Standard. I hope this changes soon to push Spell Queller closer to 4 tix, which would be a decent selling price for me. 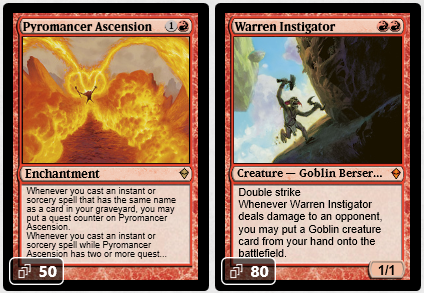 Two of the many Modern cards that took a hit right after the announcement of the Treasure Chest curated list. I thought my stocks with these guys could easily support more copies, and I'm still convinced that the impact of the Treasure Chests is exaggerated. I guess we'll see in few months if doubling down with these two cards was a good idea or not.

Less than a month ago, New Phyrexia was the most expensive set on MTGO. Then in the same week the set got flashback-drafted and the Treasure Chests were announced.

Torpor Orb and Phyrexian Metamorph are no Modern superstars but have shown great potential in the past, and I like them for this exact reason. Since they are not the usual Modern contenders, I would expect their current bottom to be fairly solid, while they could triple or quadruple if they become popular again.

Spellskite is definitely of another caliber. This artifact creature is played in many different decks in Modern and I'm expecting a rebound, although a moderate one, rapidly. 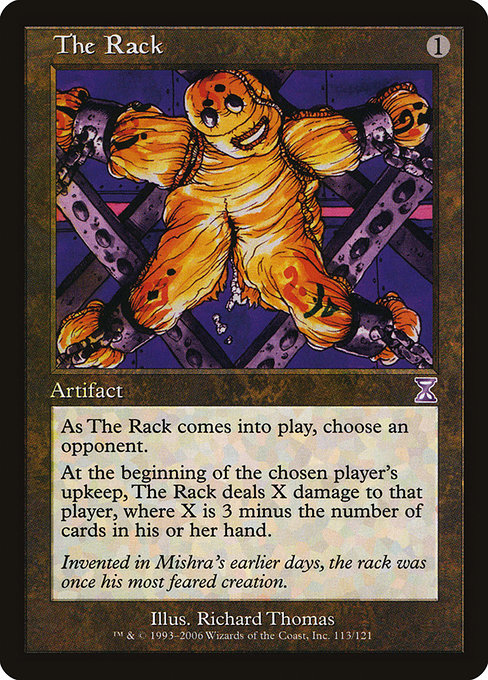 I bought this card following Time Spiral flashback drafts. The Rack probably got a little boost recently with Tom Ross piloting 8-Rack to a seventh-place finish at the SCG Orlando Modern Open last month. A 40% profit is not something I'm going to neglect in this time of skinny cows, especially since I have a few new targets in mind at the moment.

Khans of Tarkir (KTK) is simply not redeemable anymore. That doesn't help my KTK full-set spec, which already wasn't doing any wonders. With virtually nothing to expect from these in any foreseeable future I would rather take the loss and reinvest the tix now.

I still own a lot of fetchlands and haven't sold them yet. I'm hoping they can do better than the set as a whole. The only positive thing here is that a handful of Modern-playable cards, including Anafenza, the Foremost, Sorin, Solemn Visitor, the fetchlands, and Siege Rhino, will hit their absolute bottom soon.

Not all hope is lost for Battle for Zendikar sets as few mythics and several rares are rebounding a bit at this time. Nevertheless, I decided to let a few sets go to free up some tix before Pro Tour Kaladesh. Will we be able to break even with BFZ full sets? I'm not even counting on that, to be honest.

Does it surprise you to hear that Pro Tour Kaladesh is the one thing I'll be paying attention to this weekend? More precisely, I'll try to take full advantage of the Pro Tour hype by selling winning positions and attempting some quickflips.

Once again, paying attention to underdogs and cards not well covered at the Pro Tour could lead to interesting buying opportunities. During Pro Tour EMN, Pedro Carvalho piloted a U/R Thermo-Alchemist deck to a strong finish in Standard, notably causing Goldnight Castigator to jump from 0.8 tix to 4 tix in about a week. What will be the next Castigator? Or why not Castigator itself, since this Shadows over Innistrad (SOI) mythic is again under 1 ticket these days?

Although they won't necessarily rise next week exactly, I'll be watching the evolution of my EMN full sets. Oath of the Gatewatch full sets rose fairly quickly right after Pro Tour SOI and the bulk of the price hike happened in less than a month.