Below are the total set prices for all redeemable sets on MTGO. All prices are current as of October 11th, 2016. The TCG Low and TCG Mid prices are the sum of each set’s individual card prices on TCG Player, either the low price or the mid price respectively. Note that sets of Theros (THS) are out of stock in the store, so this set is no longer redeemable. 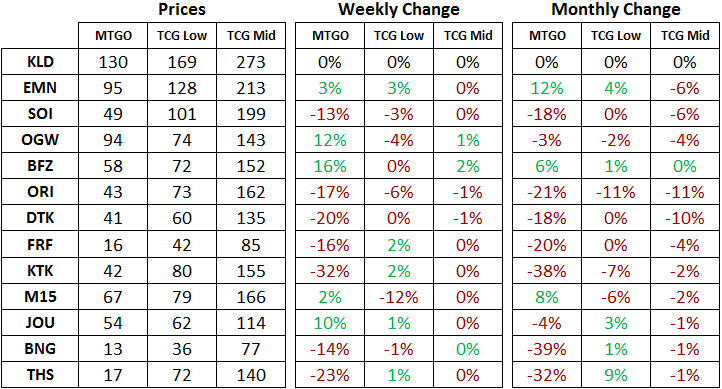 Flashback drafts are on hiatus until the end of the month. Look for triple Innistrad (ISD) drafts just in time for Halloween.

Kaladesh (KLD) hits the board this week, clocking in at a price of 130 tix for a full set. With Pro Tour Kaladesh coming up this weekend, look for some wild price movements on cards from this set.

It's safe to say that Smuggler's Copter is a known quantity at this point as it's the most expensive card in the set at over 13 tix. But a card like Verdurous Gearhulk might see a price jump as demand from players hits constrained supply this weekend. Notably though, they introduced two extra days of prerelease events so supply will not be as constrained as in the past.

There were big movements in the price of the other Standard sets this week. Both Oath of the Gatewatch (OGW) and Battle for Zendikar (BFZ) were up over 10%, recovering from the dip they experienced with the release of KLD.

Speculation about what the new Standard metagame will look like is driving prices right now, with notable movements in Gideon, Ally of Zendikar, Kalitas, Traitor of Ghet and Kozilek's Return all back over the 20 tix mark. Special mention should be given to Part the Waterveil from BFZ as it was featured in Saffron Olive's latest budget deck. Supplies are tight on this card as a result and the price hasn't finished settling down yet.

Special mention should be made of the junk mythic rares from BFZ. Omnath, Locus of Rage, Akoum Firebird and Sire of Stagnation all hit 0.05 tix on Goatbots this past week. That is an extremely low price for a mythic rare from a redeemable set, particularly a large set. For long-term speculators who don't mind sitting on these cards for a number of months, these were priced to move.

When BFZ rotates out of Standard in 2017, value will flow from the most expensive cards as Standard players sell off the cards they no longer need. With redemption providing a price floor, the value will flow into the bottleneck of redemption in mythic rares. At that time, cards like these three will inevitably climb in price to 0.2 tix and greater. A similar effect has been occurring in the mythic rares from Magic Origins (ORI) in the past month.

Eldritch Moon (EMN) saw some price gains as well, particularly in two of the top mythic rares. Grim Flayer has powered into the 13-14 tix range while Emrakul, the Promised End is not far behind. On the other hand, Liliana, the Last Hope has stuck in the 25-to-26 tix range after briefly going above 27 tix last week. Shadows over Innistrad (SOI) was the one Standard set to show a large price drop this week as it goes below 50 tix for the first time.

With Dragons of Tarkir (DTK) and Magic Origins (ORI) leaving Standard, these sets went on sale this week and saw price drops of 17% and 20% respectively. Speculators and players alike who are looking for Modern cards to speculate on should be targeting cards from these two sets this week.

Another big drop was observed elsewhere in the price of Khans of Tarkir (KTK). Although this set rotated out of Standard in the spring, it went out of stock for redemption in the Magic Online Store. This caused a massive 32% drop in the price of the set. Once redemption ends, the value of an MTGO set drops substantially.

In this case, it looks like the set has now been restocked, so the market should recover as redeemers take advantage of these low prices. The redemption cutoff date is not until May 31, 2017, but it looks quite likely that the number of sets available for redemption is rapidly dwindling. If prices recover, don't be left with extra KTK cards in your collection.

The impact of Treasure Chests is still reverberating through the MTGO economy and this week's casualty is the price of Cavern of Souls. This Modern staple is off more than 50% from its recent peak and now sits at 21 tix. With triple Avacyn Restored (AVR) draft coming in the flashback queues on top of prizes from Treasure Chests, the market is being very pessimistic about this card.

With the end of KLD prerelease events, the draft queues and limited leagues are now taking boosters for entry. This has meant the price of KLD boosters has recovered from under 3 tix to 3.2 tix.

The new equilibrium price is around 3.3 tix, so we are close to reaching a maximum, although going over the equilibrium price has been known to happen. Speculators should be looking to sell any boosters that they picked up in the past week. Holding onto these over the long term is a recipe for turning a profit into a loss.

As usual, the portfolio is available at this link. With KLD prerelease leagues in full swing, the price of SOI and EMN boosters dropped to an all-time low, so I decided to take a small position in these. Here's my rationale.

The popularity of a draft format matters when there is a choice of formats. In the case of SOI and EMN, it's the only Standard draft format available now, since they have removed the BFZ and OGW queues. Here's a look at the price of Standard boosters and their expected values, as taken from Goatbots.

One thing that sticks out: KLD has the lowest Price-to-Expected Value (EV) ratio. As the newest set, KLD is in high demand from drafters, so the price represents a very high draft value. Contrast that with an OGW booster, that is priced very closely to the expected value of the contents. Since OGW is no longer draftable, it's draft value is zero.

With this in mind, SOI and EMN boosters were briefly priced below that of BFZ and OGW boosters. This didn't seem correct to me. If we ignore the expected value of the boosters, the market was saying that the draft value of SOI and EMN was less than zero. Given that cards from SOI and EMN are both at peak supply on MTGO, I'm willing to bet that the price of these sets will rise, and thus the expected value of the contents of a booster will rise too. I'm also willing to bet that players will seek to draft these sets once they get their fill of KLD.

Add it all up, and it looked like the market had priced EMN and SOI boosters at an extreme discount. I will look to sell these boosters as we get closer to the winter.