Below are the total set prices for all redeemable sets on MTGO. All prices are current as of October 4th, 2016. The TCG Low and TCG Mid prices are the sum of each set’s individual card prices on TCG Player, either the low price or the mid price respectively. Note that sets of Theros (THS) are out of stock in the store, so this set is no longer redeemable. 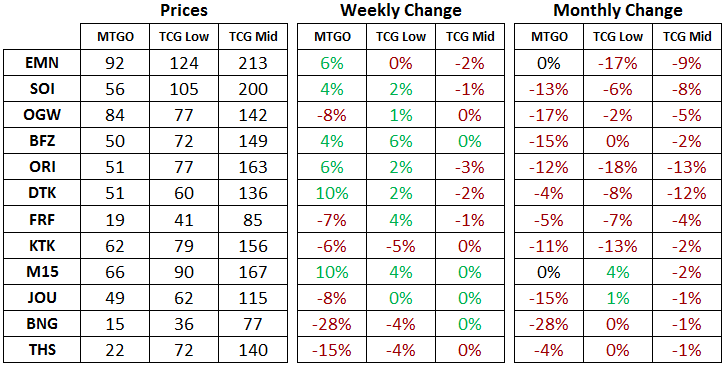 This week, some substantial changes were announced to the MTGO economy, including the introduction of Treasure Chests as prizes, the shortening of the redemption window, and changes to draft and sealed deck entry.

For speculators, this removes some of the more predictable trades. Once redemption ends for KLD, the prices on all cards will drop as they lose the option value of being redeemable. Junk rares, both mythic and regular, will trend downwards and only see bumps in price if they show up in Constructed. Players will have to carefully judge holding onto expensive Standard cards near the close of the redemption window, as prices are bound to crash.

Foils in particular are going to be a very volatile market. It's possible there will be a massive shortage of available foils near the end of the redemption period, pushing up prices on particular cards to extreme levels as dealers seek to extract the value of their foil holdings out of the MTGO economy. Players and speculators alike should be very leery of buying any KLD foils when we get close to April.

The shortening of the redemption period will also have an impact on paper prices. Without the release valve of redemption, paper prices could have more upside after redemption ends. There's also the possibility that relatively more supply could come from cracking boosters. This would have the effect of driving up the price of mythic rares and driving down the price of rares, uncommons and commons.

This is because redeemed sets always enter the paper market in a ratio of one of each card. Any supply from cracking boosters means there are one mythic rare for every two copies of each rare (and more commons and uncommons). Thus, the relative scarcity for mythic rares will increase if the supply from redeemers is curtailed. Relative scarcity translates into higher prices.

I suspect Treasure Chests will not have a noticeable impact on the price of Modern staples. Right now, there is a lot of fear pervading the market as players look to their collections and see possible huge devaluations in the immediate future. Typically these types of reactions have been overblown, but taking a wait-and-see approach is certainly prudent. Brave speculators should be on the lookout for fire sale deals as a result of this change.

Flashback drafts go on hiatus this week as Kaladesh (KLD) prerelease events start up. Look for triple Innistrad (ISD) draft at the end of the month, just in time for Halloween.

The first results are in from KLD Standard with the Star City Games Open in Indianapolis. The card of the week surely has to be Smuggler's Copter as it placed the full 32 copies into the combined Top 8 decklists. This tournament was dominated by aggressive strategies, which is nothing new for the start of a freshly rotated Standard format. Aggressive strategies are much easier to optimize in a short period, where control and midrange decks need time to figure out the right mix of cards.

The pros are also working hard on the format, and no doubt keeping a tight lip on their knowledge of how KLD Standard plays out. Once the Pro Tour results start popping up in a little over a week, we'll get a much better perspective on what KLD Standard will look like.

In terms of prices, we are seeing almost all of the Standard sets and the just-rotated sets move higher this week on MTGO, with the exception of Oath of the Gatewatch (OGW). This price strength is not unusual for this time of year as excitement builds around Fall Standard. For this year, the strength of Collected Company decks was probably a factor in making Standard a more stale format than usual.

Many Modern staples have sold off in the wake of this week's changes to the MTGO economy. The threat of Treasure Chests devaluing cards has triggered a preemptive devaluation as players seek to reduce their holdings of cards. As Sylvain has noted in his article this week, the MTGO economy has gone through a number of panic-driven selloffs before. Many cards that have sold off steeply in the past have gone on to record highs, indicating that whatever the short-term impact of these panic selloffs, the MTGO economy has continued to grow in the long run.

Once there is more data on how prices behave in the post-Treasure Chest world, it should be clear whether or not they will steadily devalue Modern cards or just meet a fraction of demand. If it's the latter, then speculators and players who were brave enough to be buyers this week will be quite pleased that they were.

The change to draft entry from 14 to 12 tix essentially signals that the equilibrium price of a booster going forward will be 3.3 tix. This is because entering with product costs 2 tix plus boosters, so between these two means of entry (tix only and product plus tix), the value of the entry fee should be roughly equal in the long term.

Previously it was profitable to buy boosters from the new set during prerelease events, and then sell them once the product entry option for draft queues opened up. Prices would usually get up to 3.7 and higher, which meant that buying boosters for 3.4 tix was a profitable (if grindy) trade.

With the changes to draft entry, lowering the buy price to 3 tix or less seems prudent, though this might be a low estimate as we have no data to guide us at the moment. If you are looking to pursue this trade, keep your eyes out for KLD boosters on sale for a good price. Once prerelease events end on Monday, look to sell your boosters as demand cranks up for drafting the new set.

The other big news was the dropping of older draft queues, which means that Battle for Zendikar (BFZ) and Oath of the Gatewatch (OGW) will not be a supported draft format. This means the play value of the boosters falls to zero, and the only thing supporting their price will be the value of the contents.

As usual, the portfolio is available at this link. With the continued price gains this week on Shadows over Innistrad (SOI) and Eldritch Moon (EMN) sets, I have paused purchasing these and started focusing in on specific cards.

Decks using Aetherworks Marvel in Standard are looking to power out an Ulamog, the Ceaseless Hunger or Emrakul, the Promised End. This archetype saw some success at the Star City Games Open this past weekend, but is probably going to benefit from further tuning. I expect the strategy to improve its results as the format evolves. There is also the chance that the pros get the right build in time for Pro Tour Kaladesh. A breakout performance for any deck at that event will push up the price of featured cards, and I think Aetherworks Marvel decks will have a chance.

With all that in mind, I took a look at the two Eldrazi titans and their speculative prospects. Emrakul was just finishing up its draft window and has stuck around in the 8 to 10 tix range. The timing for buying this card was good. Ulamog was also at a long-term low of about 5 tix. With both cards near a probable bottom, Standard rotation on the way, and the potential for an interesting twist on the ramp archetype, everything lined up on these two cards to suggest a strong upside with limited downside.