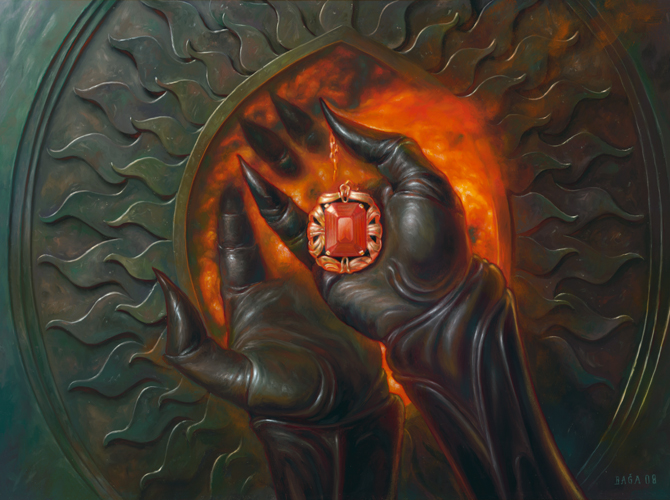 I was a trading machine over the course of the past week. I hit up Grand Prix Dallas and when I wasn't busy infecting my opponents in the tournament, I was getting my trade on. It occurred to me after it was all said and done that I engaged in three very different types of trading and that each one was very effective at achieving a different particular goal. With that in mind, I'd like to outline the different kind of trades I took part in and describe how you can use these different strategies to your benefit in the future.

Depending upon your objectives and the type of items you have available, it often helps to use different strategies to maximize your collecting goals. It was pretty interesting to me in hindsight that by doing three very different types of trades that I was able to get the most out of my cards.

1. Trading on Behalf of a Store

I ended up going down to Dallas with my local game store, RIW Hobbies. They had worked out an arrangement to have a small table to buy cards. Since they are my buddies, I figured I'd help out while I wasn't actively playing in the tournament.

It turns out that there was a miscommunication somewhere along the way because the deal that was worked out only provided the store the opportunity to buy cards, and not sell or trade cards at the buy table. So as it turns out, the store had brought down several binders full of awesome bling foils but had literally no outlet to do anything with them.

I offered to take the binders and go out on the floor and trade out of them. Here is the program I worked out on the trade floor: I didn't want to get the contemptuous groan of disgust from fellow players for saying I was a store and I wanted to trade for people's cards at 70%. I've never been a big fan of "stores" who demand getting a better percentage on the trade floor. I always figured, "If you were a store then why don't you pay for a booth like all the other real retailers?" People who do that and try to slightly undercut the dealer prices without having to pay the steep booth premium are just not my style.

Anyways, what I ended up deciding to do was sit down with potential trade partners and let them know I was trading for a store but that I'd trade with them normally. I said that I could only take high-turnover cards, but that I'd give them equal trade and they could take whatever they liked out of my foil binders loaded with Masterpieces, Expeditions, and other Modern and Legacy foils.

I found several extremely enthusiastic trade partners who were exceptionally happy to get 100% trade value on their cards in exchange for high-end, desirable foils.

The key to why this trade was effective is that these types of foils, while really neat, don't tend to be the quickest-turn-over sellers in a retail store. Sure, $100 Masterpiece Crucible of Worlds is great but it really has a small niche market at an LGS.

On the other hand, the store tends to have a lot of trouble keeping certain highly-played staples in stock: Path to Exile, Grim Flayer, Stony Silence, Noble Hierarch, and Snapcaster Mage all come to mind. For a store that runs a lot of Standard and Modern tournaments, these are the kind of cards that players constantly buy, and we have trouble keeping up with demand. So, while I wasn't technically turning a profit on these trades, I was flipping cards that are slow sellers and turning them into cards that are much more liquid.

Granted, it obviously would have been better to trade from the table while buying, but that wasn't the arrangement that had been worked out. My creative trading solution created some solid value for the store's inventory that made the best out of the situation.

Moral of the story: If you have an outlet to turn cards into cash it is often better to have cards that are more liquid than cards that are expensive but harder to sell.

The same can be said even for people who are only looking to make trades. There are certain kinds of cards that everybody is looking for like I described above, and it is always good to keep in mind how easy or difficult cards will be to move. It is always better to have cards that are easy to trade than ones where you are looking for a very niche buyer.

2. Trading for Negative Value With a Store

I ran into a group of traders who run a mono-trading store in North Carolina. They seemed like nice guys and they laid out their strategy: "We will take anything you have at 80% of TCG Market Price and you can take anything we have at 100%. I don't typically like these types of arrangements, but I did like that 80% is higher than more trade floor stores offer and I really liked the fact that they would take anything. I also loved the fact that they said they would take foreign cards for the same price as English.

I wrote about how I organize my collection a few months ago, and basically I have three separate things going on. I have my personal collection of cards that I use for tournament play and I don't trade out of these cards. I have a binder of cards that I think are good investments that I'm sort of holding on to until they mature. Then, I have a trade binder full of cards that I'm looking to trade for better cards that would go into the "investments" binder.

I would categorize the actual trade binder as cards that have diminishing value and/or have some value but are fairly low-demand. It is basically the binder that no buyer at a booth actually wants to deal with because it is full of cards that are challenging to turn over.

I ended up completely flipping the entire binder to them. I figured that if I am getting 80% on the dollar for cards that are hard to move, and can put that toward cards that are highly liquid, the amount of time I'm giving up in 20% tax is easily worth the time I save. I won't have to sell them online or find the perfect trading partner who wants a Japanese Ajani Steadfast.

I ended up trading the contents of the binder for a Mox Ruby, Savannah, City of Traitors, and a playset of Liliana, the Last Hope. I couldn't have been happier with the deal. Getting 80% in trade is much higher than dealers ever would have offered on these cards, and I turned it into desirable, high-end cards.

Moral of the story: Sometimes you can lose value but actually win in the long term. The "convenience tax" of 20% was well worth getting to transform a collection of tedious and undesirable cards into Grade A beefcake cards.

Kevin Cron, a fellow Vintage fan and good friend of mine, proposed a deal at Eternal Weekend where we might work something out to swap his foreign black-border (FBB) dual lands for my Unlimited copies. He wanted some Unlimited copies for alters he was planning and knew that I'd prefer FBB. I agreed as long as the deal made sense for me to do, so we met up yesterday and tried to figure things out.

Obviously, the FBB duals are worth more than the Unlimited ones. So there was some value to be made up for, but we were able to make it work.

Sometimes the best possible way to make a trade is just to find a person who has what you want and wants what you have! Duh, simple, right? Well, it isn't always easy to find that exact situation but that is exactly what ended up happening.

Obviously, we are friends who aren't looking to take advantage of each other and genuinely wanted what the other player had. So, we looked up each card and got a range and eventually settled on a deal. It was one of the biggest trades I've ever made!

We looked up all of the cards and assigned them cash values and traded straight-up with prices adjusted for condition. 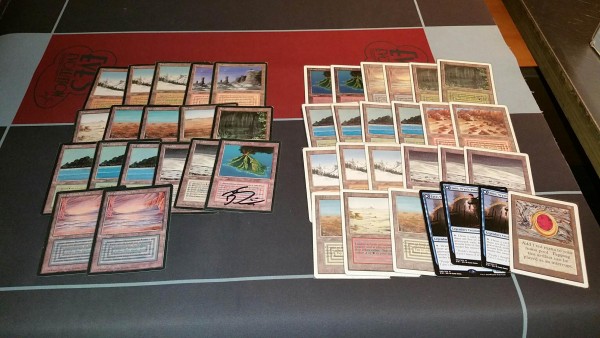 The Mox Ruby that I picked up from the trade store helped fill out the value of the trade quite nicely!

The cool thing about making a trade like this with a friend is that you both get maximum value for your cards. If I had sold my cards online, eBay and PayPal would have taken a cut—the same thing would have happened on Kevin's end. If we both would have tried to trade with a dealer instead of each other, we would have both lost thousands of dollars in value!

Moral of the story: The best way to trade is always with other players who are willing to trade straight-up with you. When both players want what the other has and are willing to trade evenly, the benefits are real and in both parties' favor. The ability to duck paying online fees or giving a hefty chunk of value to a dealer is absurdly awesome.

Obviously, the problem with trading straight-up when it comes to highly desirable items like FBB duals and Power 9 is that most players don't have the same selection for trade as a dealer would. However, when you find those types of situations—"Interested in trading your Unlimited duals for FBB?"—you should always be ready to jump at it and be fair with your trade partner.

All things considered, I'm pretty happy that I'll be able to play all black-bordered decks in Legacy and Vintage from now on.

Trading isn't an exact science and in some ways it is kind of an art form. Different types of objectives and portfolios lend themselves to different kinds of trades. The key is always to take what you have, get the most for it as possible, and put it toward getting what you really want.

One thought on “Insider: Three Different Kinds of Value Trades”