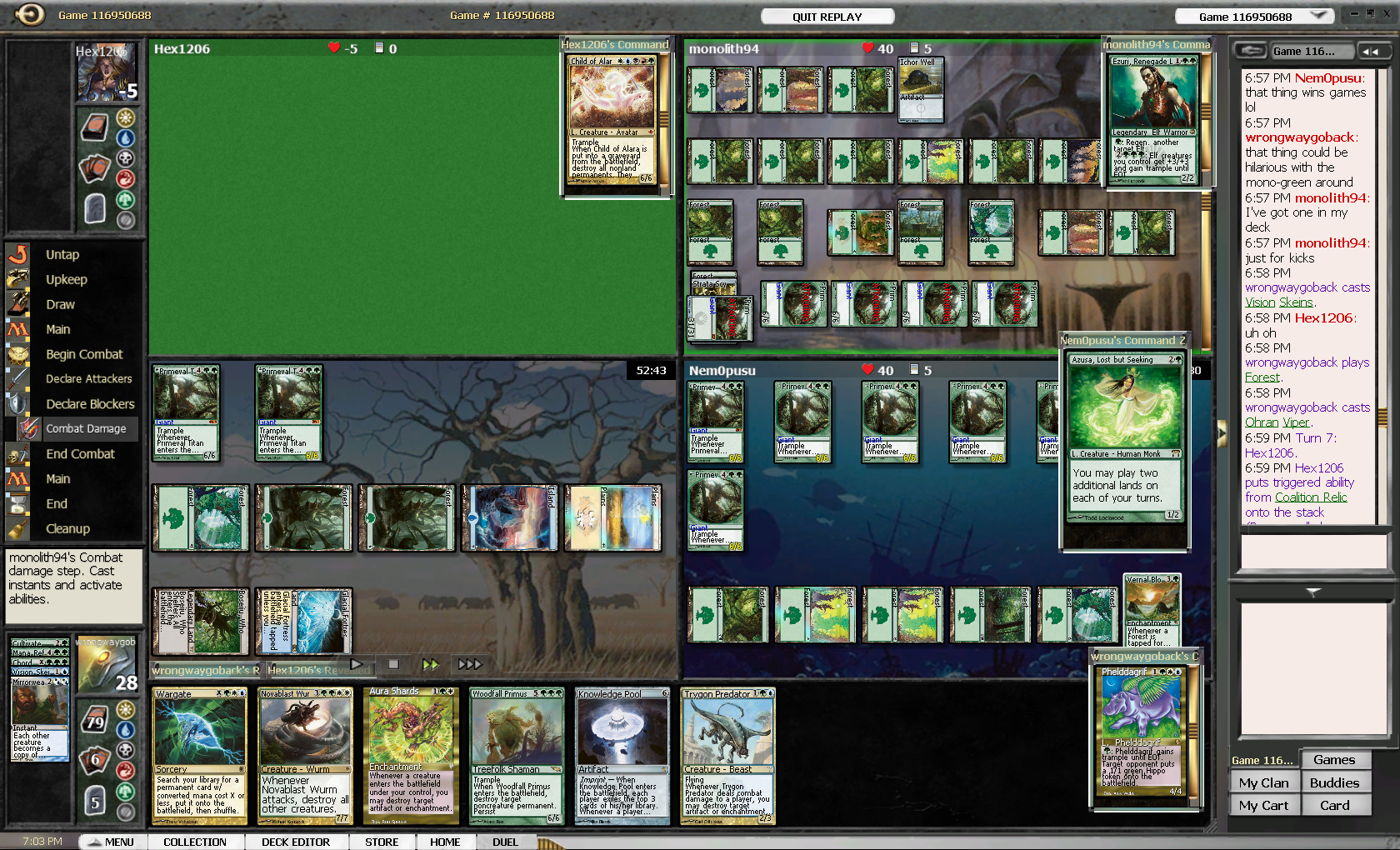 Looking solely at the Top 16s of recent events, observers might argue that Modern has become shockingly interactive. Todd Stevens' Sun and Moon, a white-red prison deck with a midrange slant, just won a Star City Games Open in Knoxville, headlining a Top 16 packed with more Sun and Moon, Skred Red, and Jund. Earlier this month, Skred Red beat out Grixis Control in the finals of GP Dallas. That tournament's Top 8 even housed a Jeskai Control deck. Given these results, is Modern is as linear and aggressive as people like to claim? 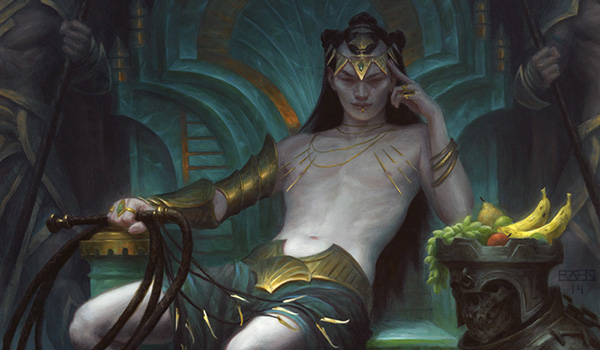 Well, yes. When we look at the decks that did well over the course of the latest GP, the format's true colors reveal themselves. In terms of representation, Infect dominated GP Knoxville, closely followed by Bant Eldrazi, Dredge, Burn, Death's Shadow Zoo, and RG Titan decks. Sun and Moon, Grixis Control, and Skred Red were able to rise to the top of these metagames because they interact efficiently from the standpoint of both mana and card economy—two keys to dismantling linear aggro strategies.

There are two ways to interact efficiently in Modern. One involves playing the cheapest, most effective spells the format has to offer, including Lightning Bolt, Path to Exile, and Inquisition of Kozilek. The other employs highly relevant lock pieces to stop a large number of an opponent's cards with a single play.

We'll start with the elephant in the room. Modern has at last become a format that welcomes Chalice of the Void. With BGx decks relaxing their historic stranglehold on the format as more linear aggro decks are inducted into Modern, Chalice is making its rounds as a mainboard and sideboard hoser found in decks as diverse as Bant Eldrazi, RG Titan decks, and certain control builds. 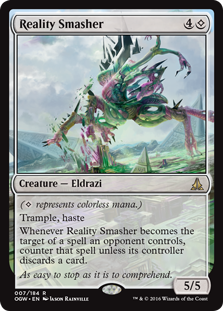 The meteoric rise of Bant Eldrazi to Modern's forefront has also created prime conditions for Blood Moon, a card that already hassles interactive three-color decks and can be splashed into a variety of archetypes itself (among them Affinity, Grixis, Temur, Zoo). Moon also leads the disruption suite in a few decks, including the rarely seen Blue Moon, the more present RG Ponza, and Stevens' Sun and Moon, a deck now exploding in popularity.

The main draw to Sun and Moon is its ability to run both Blood Moon and Chalice of the Void. Sun and Moon threatens to power either piece out a turn early with Simian Spirit Guide, potentially locking opponents out of the game on turn one.

Lightning Helix and Journey to Nowhere, clunkier versions of Bolt and Path, evade Chalice themselves and give the deck cheap creature removal for those that slip past its lock pieces. Sun and Moon also plays multiple sweeper effects, including Anger of the Gods, and can even interact with its win conditions, Nahiri, the Harbinger and Chandra, Torch of Defiance.

The deck's ability to play as a functioning midrange strategy when it isn't free-winning off of lock pieces makes it more robust than traditional prison decks like Lantern Control. With Dredge a known quantity now, I expect we'll see tons of Sun and Moon in the near future as more players pick up the relatively cheap deck to take back those wins from Infect. 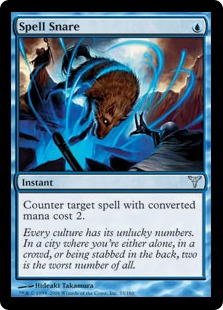 The preferred method of interacting efficiently in Modern is to run a suite of the format's consensus best cards. Corey Burkhart's Grixis Control deck from GP Dallas exemplifies this principle. While Corey ran more expensive answers like Cryptic Command, Kolaghan's Command, and even Terminate, he compensated for these with a wealth of early-game plays, including Lightning Bolt and Spell Snare. Corey also ran Engineered Explosives in the main to have access to a cheap sweeper against decks full of one-drops.

His most interesting decision, though, was to max out on Thought Scour despite only running three copies of Tasigur, the Golden Fang as delve spells. Grixis Control decks have been known to dip into Gurmag Angler, but Corey forewent the Zombie Fish in favor of a leaner threat suite. Without Gitaxian Probe, Corey was sure to need a little extra help when it came to rushing out Tasigur on turn two, a crucial play against board-blitz decks like Burn and Zoo. The four copies of Scour all but ensured his success on that front, allowing him to impact the board sooner and for less mana.

Kevin Mackie's Skred Red happens to straddle both sides of the coin, running Lightning Bolt and Skred (a Path to Exile upgrade in a deck full of Snow-Covered Mountains) in addition to lock pieces Relic of Progenitus and Blood Moon. This combination makes the unassuming deck a serious contender in a metagame so soft to spot removal and lock pieces.

The Importance of Pressure

Opponents do draw out of lock pieces eventually. They draw out of removal spells even quicker. It's crucial to put pressure on opponents if cheap interaction is to actually beat them.

Burkhart's super-reliable Tasigurs fits the bill here, complimented by Snapcaster Mage who makes ending games with reach par for the course. Kolaghan's Command can recycle both creatures in the Grixis Control list, explaining why Corey didn't run more threats at GP Dallas than he did.

Both Skred Red and Sun and Moon rely on planeswalkers to take the game, the former powering out turn-three Koths with Mind Stone and the latter slamming Nahiri on curve after crippling an opponent's options with a lock piece. Simian Spirit Guide can also help get the deck's planeswalkers ticking up a turn early. Skred Red even has a recurring Wild Nacatl in the form of Eternal Scourge.

Pawing It All Together

The way Modern's been heading over the last couple months has made me miss Path to Exile. I sleeved the card back up and have been putting in rounds with an updated build of Counter-Cat, which I think is very well-positioned in this metagame. Here's the list:

Counter-Cat packs a ton of efficient interaction and front-loads a lot of pressure, making it a strong contestant in such a linear metagame. Creature-based matchups like Zoo, Infect, Death & Taxes, and Merfolk are practically byes for this deck.

I've been considering taking Counter-Cat to the RPTQ next month over Temur Delver for these reasons. The deck is also more resilient to removal than Monkey Grow, since it plays more threats. With hard kill spells like Terminate and Path to Exile showing up in large numbers again, as well as graveyard hate for Dredge like Rest in Peace, I'd rather have a grip of Nacatls than a single Tarmogoyf.

The points we lose against linear decks by giving up Disrupting Shoal are mitigated by adding Path to Exile and Lightning Helix, since most linear decks in Modern are currently creature-based. Countering Insolent Neonate or Expedition Map on turn zero is less important when we can reliably "go Zoo" and race the degenerate decks the old fashioned way instead of spending a turn or two digging into pressure.

Unfortunately, Counter-Cat is very weak to Sun and Moon. Chalice and Blood Moon both give the deck a hard time, and planeswalkers only add insult to injury. It's draw Spell Pierce or bust in this kind of matchup, and the degree to which players adopt the new strategy will influence my final choice for December. 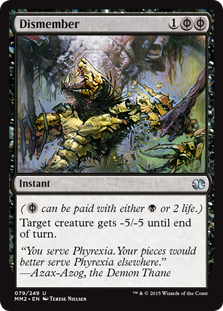 Modern has a vast card pool and in most cases can, I believe, police itself. I like to think that if Wizards had left Twin or Bloom in the format, Delver decks would eventually have surfaced in larger numbers to combat them. It's still just a matter of time, but it will take longer than it might have.

In the meantime, I think one card in particular deserves a lot more play than it has seen: Dismember. It's a freeroll removal spell against Infect, and stellar against any creature deck outside of Burn. On top of all that, any deck can play it—even colorless ones, or decks with Chalice of the Void!

9 thoughts on “Keeping Up With the Karpathians: Tuning For a Linear Metagame”