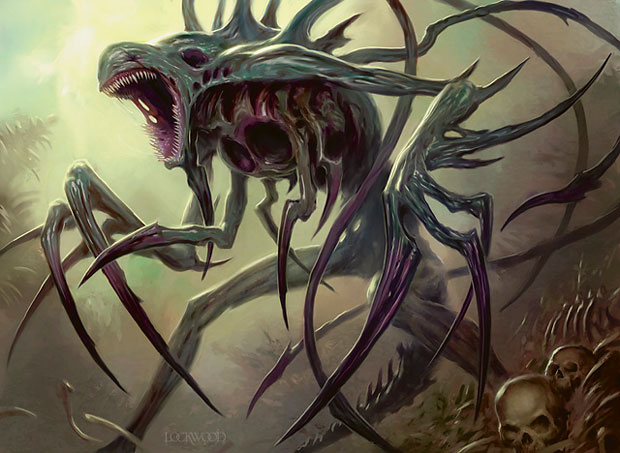 The Modern Masters 2017 full spoiler is up. The set is 100%, buckle-up buckaroo, wowie gasoline. From a pure value perspective, the sheer number of extremely high-quality, high-demand Modern staples is astounding. They literally threw in everything but the Kitchen Finks! (A great Cardboard Crack comic, made me laugh out loud).

We are all savvy investors who are looking to grind out monetary value from our collections wherever we can. Buy low and sell high, turn undesirable cards on the downswing into cards that people will want in the future.

Last week, I wrote a column that laid out a general strategy for thinking about Modern Masters finance based upon how the market adjusted to MMA, MM2, and Eternal Masters. If you haven't read it, I strongly encourage you to take a quick peek as it lays out in detail some trends that have been eerily consistent over the past few years.

Today, I am going to take the outline I presented last week and apply it to some actual picks. Last week's article was more of a "teach a man to fish" type of thing. But this week: "Here's some damn fish—eat up."

The key is to look for desirable cards that are not in MM2017, which is easy enough. Last week we were still speculating based on what might or might not find its way onto the final spoiler. However, with the whole list complete we can now start to pluck the gems from the junk.

There has already been a lot of movement. 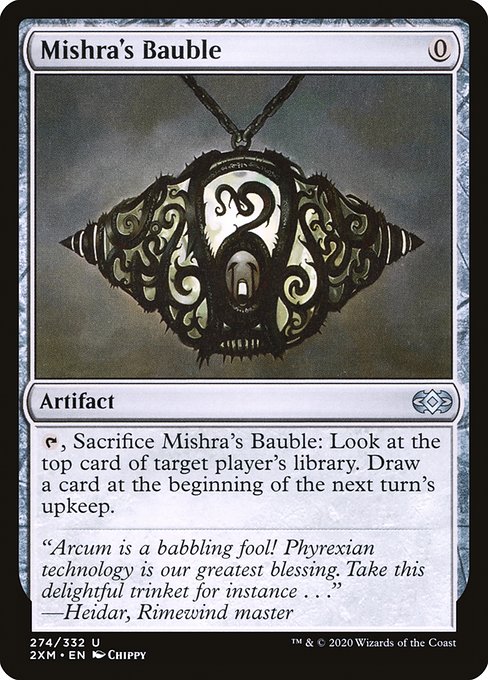 Once Mishra's Bauble was confirmed not-in, the price really spiked hard. It is a very good card from a short-printed set that is seeing play in the best deck in Modern. As my friend and teammate Max McVety always says, "That makes a lot of sense."

We can't do much with cards that have already spiked and so we need to look for things that people haven't jumped onto the bandwagon with yet. The window is limited but we've still got some time to target and pick up cards. 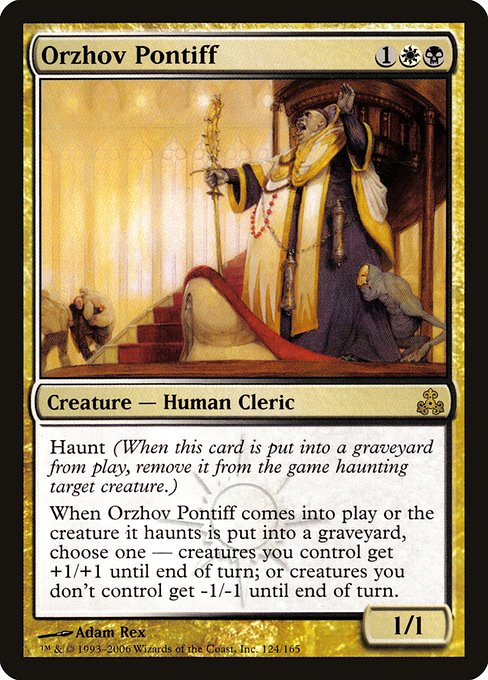 Orzhov Pontiff is a good example of what I'm talking about. It is from a very old and short-printed set, Guildpact, and has never seen a reprinting.

It is also a card that sees a pretty reasonable amount of Modern Constructed play. It is an auto-include in any Chord of Calling seventy-five, and also has reasonable applications in Abzan Aggro and BW Tokens. The point is that Pontiff sees considerable play and is also reasonably hard to get one's hands on.

At one point I wanted to pick up a second copy before a Modern tournament and I had to call like three different stores in order to find one in stock. It isn't that the card flies off the shelves, but it is a consistent sideboard seller and doesn't come through the door too often.

Pontiff is in the $3-5 range. However, from a trade perspective, I can't think of a single $5 card in all of Magic I'd be willing to give up a Pontiff to acquire. This is typically a great sign that a card is currently undervalued and likely to gain in the near future. 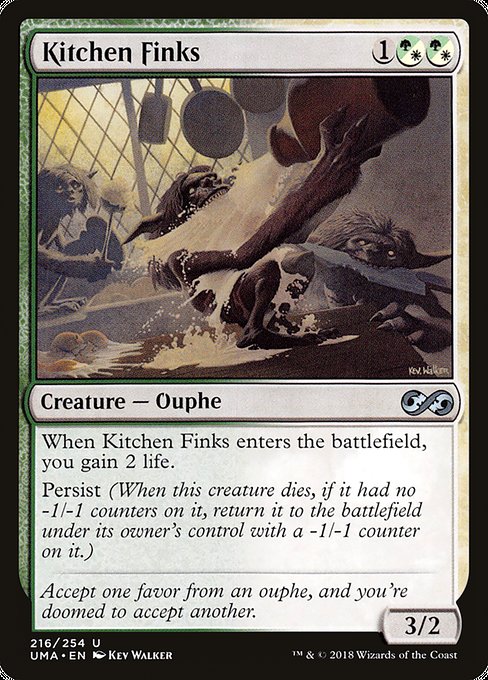 The whole Cardboard Crack pun aside, Finks is the epitome of a great card to have right now. It isn't in MM2017 and is highly, highly played in Modern. It's just a very good card. Whether you are using it to combo, grind midrange mirrors, or stabilize against Burn, the card is a format-defining all-star.

It is the kind of card people end up needing to play at some point. Unlike a card like Pontiff, which is typically a one- or two-of, Finks is a card that people want to quad up on. Foils on Finks are also a great card to pick up since picky deck blingers who are willing to spend good money on cards will need four.

It goes without saying that Finks is also a Cube, Danger Room, and casual mainstay as well. It is a card with a lot of demand that feels like it should have been in MM2017, but isn't. 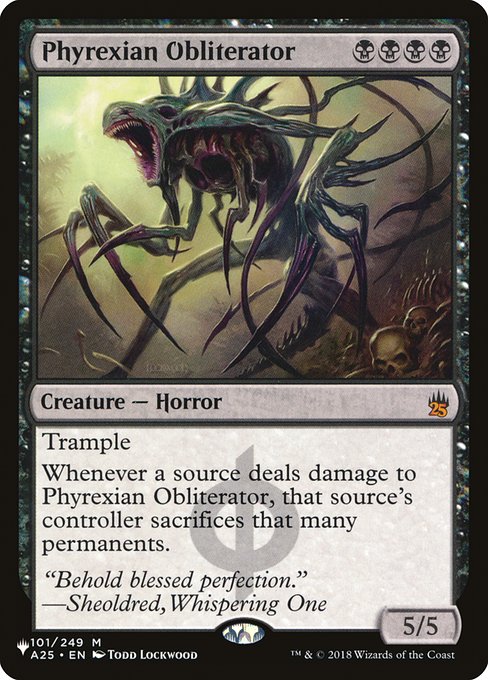 For those of you looking for potential high-risk/high-reward picks, I'd suggest Phyrexian Obliterator. It has never been reprinted and is a big-time popular casual card. The stats are obviously nuts when it comes to getting a good deal and its ability is very, very powerful. The restrictive casting cost can even be turned into a boon when it comes to fueling the devotion mechanic. I've thought about building around the card in Modern before but have never gotten around to it.

Without an inclusion in MM2017, the card will likely continue to tick up in price over the next few months. Obviously, it would need a breakout Constructed performance to spike, but even without a spike it feels like a nice investment card.

There was an error retrieving a chart for Boom

Here is another perfect example of a card primed for increases. Boom // Bust is a very powerful and highly playable Modern card. I missed the Top 8 of a Modern Pro Tour on tie breakers with a quad Boom-Busty deck years ago.

The effect is extremely powerful. Whether you are just targeting one of your fetches to play a two-mana Stone Rain, or going hamtaro with the full Bust, the card is great. The other thing is that it is quite a combo with Thought Scour and Goblin Dark-Dwellers. A five-mana 4/4 menace that casts Armageddon is one heck of a card!

I'd watch out for this one. I wouldn't be surprised if it became much more popular in the coming months as new players discover the joy and awesomeness that is destroying all the lands.

There was an error retrieving a chart for Noble Hierarch

Perhaps the most significant exclusion from MM2017 is Noble Hierarch. It is a $60 format staple that has only seen one reprinting.

Noble Hierarch is easily one of the top five most important staples in the Modern format. It is absurdly efficient at accelerating mana in any green-white or green-blue deck, and unlike Birds of Paradise it has inherent offensive properties. It even attacks underneath an Ensnaring Bridge, a play I have made many times myself.

In many cases, Hierarch is the threshold card that limits players' access to a given archetype. Any deck running her runs the full set, and shelling out $200-plus for a playset is no joke. It is also a gateway card that opens up a lot of new options for players. Once you have Hierarchs, you can build Infect, CoCo, Eldrazi, and more. This card is highly coveted by those who don't have it.

Seeing as it wasn't included in MM2017, I anticipate the price continuing to rise in the coming months. Is Noble Hierarch going to be the new Tarmogoyf? At this point, I feel comfortable saying that Noble Hierarch is much better, more played, and now possibly scarcer than Goyf. It's not out of the realm of possibility. 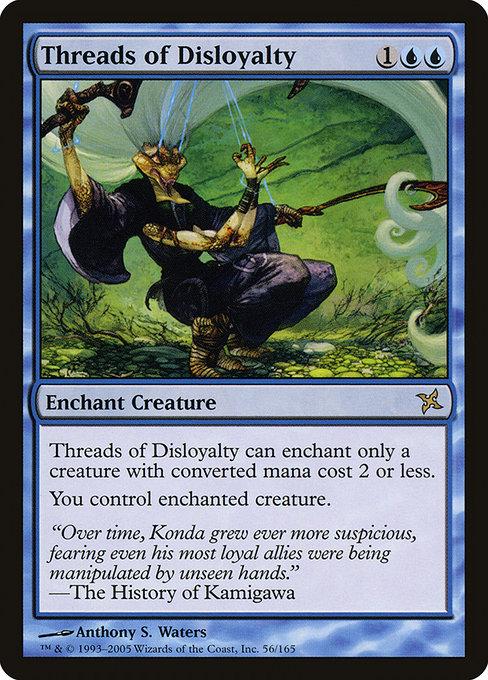 Threads of Disloyalty is another really interesting prospect. Like all of the other cards on my list, it wasn't included in MM2017. In fact, it has never been reprinted outside of the rinky-dink Betrayers of Kamigawa expansion. Which makes it fairly hard to find.

The price tag is very low. I can recall multiple points in time when it was approaching $20. Now, at just a fraction of that price, it seems the card has very likely bottomed out.

The card is straight-up great against Death's Shadow Jund out of the Grixis or Jeskai sideboard. It steals all of their threats, which are often somewhat difficult to deal with via red removal like Lightning Bolt. Why kill it when you can just take it for yourself?

It's true we don't see a ton of Threads at the top Modern tables. But there was a time when it was a premier constructed staple, during the old Extended days. I'm not sure if the decrease in play is because Threads is worse than it used to be, or because it just isn't en vogue right now. I certainly include the card in sideboards when I play blue decks, and I'm always happy to have it along for the ride. Stealing creatures is a big game.

A Small Sample of Picks

There are literally hundreds of interesting prospects right now if you're thinking about turning over some of your trade stock into new cards. Today's article shows a very small sampling of the types of cards that have a lot of potential at the moment. If it wasn't in MM2017, chances are that the price will begin to trickle upward over the coming weeks.

A lot of cards have already started their rise, but others just haven't caught on yet. Many people don't understand the market well enough to know that if it wasn't in MM2017, it is solid gold right now. I want to trade with these people as much as possible for exactly the kinds of cards they are currently undervaluing.

Modern Masters 2017 is truly a gifted value. There are so many great cards that it seems unreal. However, with due diligence it can also be the gift that keeps on giving when you target singles that are not reprinted and wait for the value to come.