I'm back this week with more of my popular financial set review, now tackling the Modern Masters 2017 rares. I won't cover each rare in the set, but I will review the most important ones in depth. I also want to talk about a few choice uncommons, so grab your calendars and wallets. You'll need them to plan out the rest of your MM17 purchases! 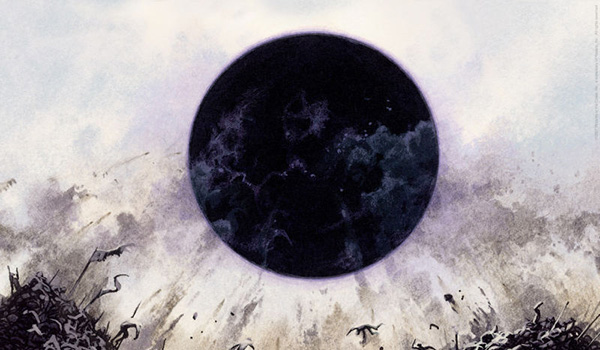 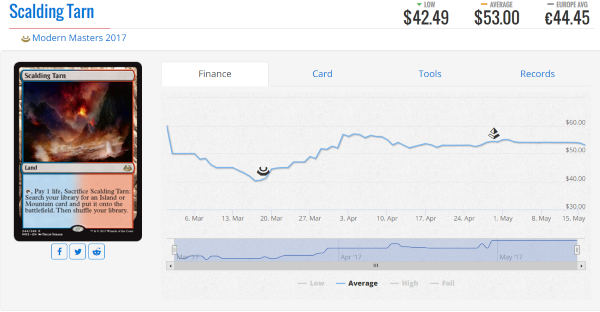 Everyone cares about these cards, right? They surprised at rare, kicking off the spoiler season with a bang. But where will they actually end up? Well, ever since we've had all 10 fetches in Modern, they have slowly gravitated away from the prototypical pricing scheme of years past. No longer are we bound by the "blue tax" typically prescribed to dual lands that produce blue mana. Instead, rarity and deck popularity are more driving forces than ever on the price of these cards.

The two most popular fetches, which are likely to remain the most expensive, are Scalding Tarn and Verdant Catacombs. In a distant second will be Misty Rainforest and Arid Mesa. The least popular and least expensive is Marsh Flats, and I'm not expecting that to change. Importantly, the price of these lands should continue to diverge, as the popularity of the lands is more relevant at many levels than their rarity. My expectation is that Tarn and Catacombs will rebound, Mesa and Rainforest will converge to be about the same price, and Marsh Flats will soon hit Khans of Tarkir fetchland prices. 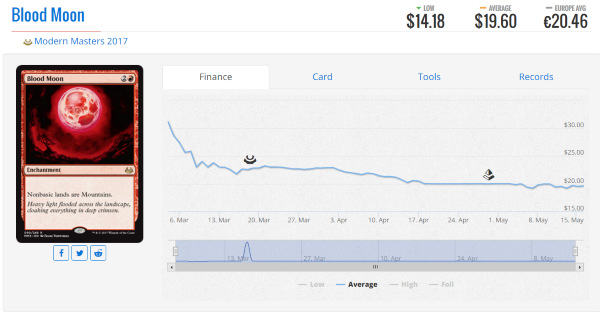 No matter how many times you print it, Blood Moon is one of those cards that will always manage to claw back to its old price tag. Did you know Blood Moon was $7-8 for about eight months after it was reprinted in Modern Masters in 2013? In four years since then, it's been as high as $55. This is a maindeck card and sideboard card, unlikely to ever get banned, and unlikely to ever fall out of favor. I would be very cautious about waiting to buy these, because I think it will only take one or two strong Modern or Legacy showings to push them back to $30-35. 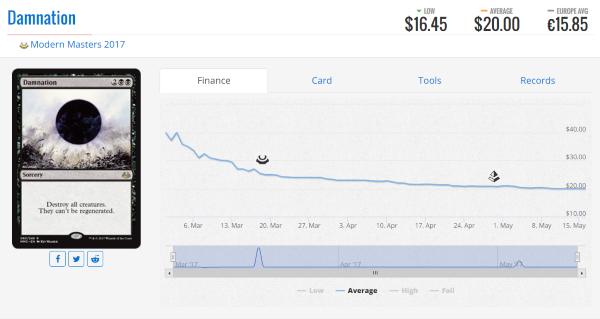 Truth be told, I thought Damnation would continue to fall from here. The reality of the situation is that the memes were real. A lot of people wanted a Damnation reprint really bad, and when we got it they decided $20 was the right price to buy in. While it's not terribly popular in Modern, Damnation is still an important sideboard card for some decks. The casual demand for the color-shifted Wrath of God won't slow down, and this flat line is probably as low as it goes. It may start rebounding with the new Commander product in a few months, so I'd hop on this now. The most you could save by waiting is maybe $2-3, but you could lose upwards of $10 on each copy if Commander players go nuts for it again. 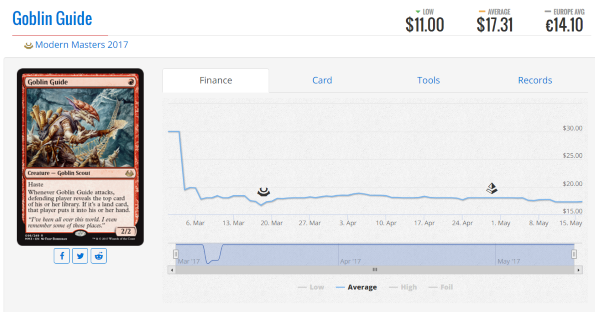 Goblin Guide has a curious story. It clearly started out far too expensive for its own good, but now it's still dropping by a few dollars a month. I think part of the reason is that Eidolon of the Great Revel has taken up some of the lost value, but another factor may be the new Guide art, which just isn't very appealing to many players. Burn also isn't putting up the numbers that really help bolster the price of its cards.

In my opinion, for the foreseeable future, Goblin Guide will continue to decline in price until around January of next year if Wizards doesn't throw Burn a bone in new extensions. I think the combination of Fatal Push and additional fast lands (Blooming Marsh, etc.) has put a tangible strain on Burn's better matchups. It's possible that Harsh Mentor helps reinvigorate the archetype, but I don't think improving already-good matchups will solve Burn's problems. 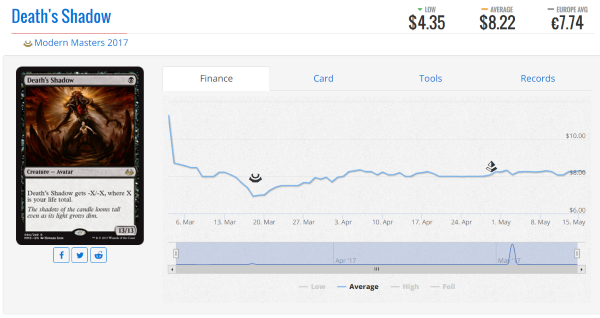 Death's Shadow's price is rather low for such a flagship Modern card, but it's likely due to the fact that a lot of the deck's cost is tied up in a few very hard-to-find cards. Mishra's Bauble, Tarmogoyf, Verdant Catacombs, and Thoughtseize make up a larger portion of the deck than Death's Shadow itself. We have seen the reprint of some of those cards start to filter down to the previously much-less-expensive cards in the deck. Thoughtseize itself has finally shown some signs of life after being relegated to $11 for almost a year. It's now up $6 almost exclusively thanks to its play in Shadow decks.

I would continue to wait for the price to drop if you are looking to get into the deck until we see some marquee reprints. Some less-assuming ones I would watch out for are Street Wraith, Mishra's Bauble, and ironically, Fatal Push. Fatal Push is pretty expensive due to its dual Standard and Modern demand, but it seems like the perfect kind of card to be reprinted heavily as an FNM promo. If we see a reprint of Bauble, Fatal Push, or Street Wraith, I would make a move on Death's Shadow. 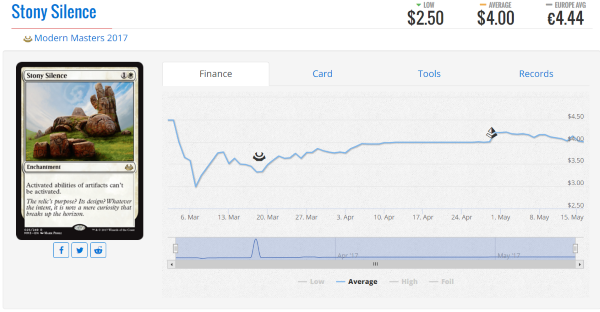 Stony Silence and Grafdigger's Cage are very similar to each other and can be looked at the same way. They're powerful hate cards that fall in and out of favor depending on the top decks in the format. That being said, they're from sets that, generally speaking, are a little under-printed. They were each worth $10-15 before the reprint, and it wouldn't surprise me if a good weekend for Affinity or Dredge propelled them close to their pre-reprint price.

If you want to see an analogous scenario, look at Rest in Peace, which didn't get reprinted and doubled in price almost instantly. These are the kinds of cards that I tell people to buy a few copies of and throw into a closet for a few years. They're not exciting, and nobody will talk about them—but they will move. 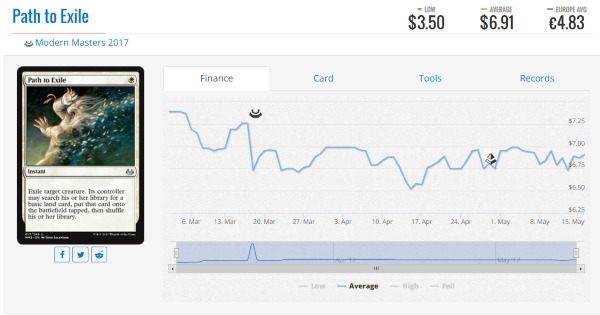 Path to Exile hasn't be less than $8 in years. Please don't do yourself the disservice of failing to buy these again. I understand it doesn't look like a big discount, but players literally cannot get enough of Path. It's hugely popular in casual circles because it removes almost any creature, and nearly every white deck in Modern plays four copies in their 75. If you have plans to play any deck with white mana in Modern, you will not regret owning a set of these as soon as possible. 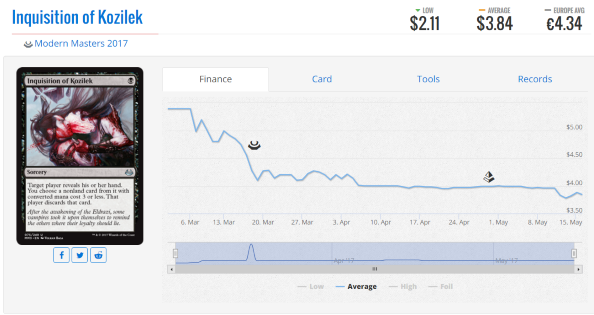 If you came up to me and said, "Hey Jim, I have $20 to spend on Modern cards, what should I buy?" I would only have one answer. This card was $26 right before Oath of the Gatewatch was released, and it wasn't even reprinted there! From $26 down to $4 you are able to buy a whole playset of these and then still have money for another half a playset for the cost of a single copy a year ago. Inquisition of Kozilek is ubiquitous, powerful, and—right now—cheap. There is no place for it go but up unless it gets reprinted again. I'm not expecting that to happen and I think you will be happy if you purchase these today.

I expect all of these cards to remain under $2 for the next year.

Hopefully I covered all the cards you are interested in in Modern Masters 2017. If not, you can always feel free to leave a comment below or shoot me a message on Twitter. If you enjoy this style of writing or would like to see more regarding future expansions, please let me know in the comments! I'm always looking for new ways to present information about the financial side of Magic.