With Pro Tour Hour of Devastation (HOU) in the books, the financial repercussions  of that event are reverberating throughout the MTGO economy. Negative impacts are clearly seen in three of the sets that are rotating out of Standard in the fall: Battle for Zendikar (BFZ), Oath of the Gatewatch (OGW) and Shadows over Innistrad (SOI). With this last marquee event establishing the metagame, there is a greatly diminished chance of any one card breaking out in the format. In other words, the option value on cards from these sets that aren't seeing play has dropped substantially. With the clock ticking on their time in Standard, a rapid depreciation has commenced.

At the top of list are cards that are linchpins in the previously dominant Mardu Vehicles deck such as Gideon, Ally of Zendikar. The price of this card broke below 10 tix for the first time ever this past weekend and I definitely took notice of this event. Gideon is a card that sees some play in Modern and is a large-set mythic, so it will hold value to redeemers after rotation. These two factors are a great start for a potential spec, and the price drop over the weekend had me wondering if it was time to start to buying. Taking a look at how the prices of large sets evolve in and around rotation will help answer this question.

Below is a chart that details the price path of the last three large sets that have rotated out of Standard, on and around the date that each of them rotated out of Standard. The "0" represents the week that the sets were no longer legal in Standard. As you can see, the pace of price declines in advance of this event can be rapid, with Magic Origins (ORI) descending from over 100 tix to below 50 tix only eight weeks later. Khans of Tarkir (KTK) showed a more measured decline and a long, flat price bottom around rotation. Dragons of Tarkir (DTK) was closer to ORI but ended up hitting its bottom in the weeks after rotation. Also included in the chart are the first few weeks of the price paths that BFZ and SOI are plotting out. Clearly, the time to be a buyer is a number of weeks off yet, so the purchase of Gideon has been put on hold for the time being. 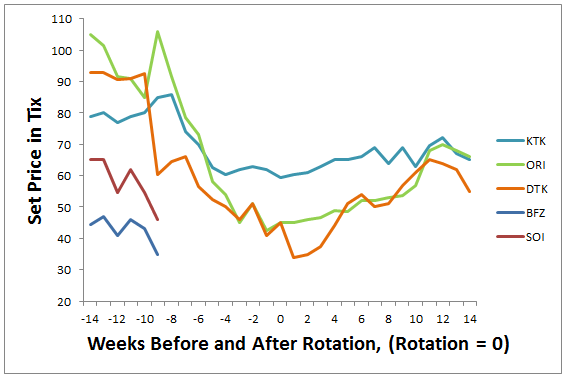 Elsewhere, Eldritch Moon (EMN) managed to buck the trend of rotating sets as the resurgence of Zombies and B/G energy in Standard propelled EMN's set price. The price of Liliana, the Last Hope shot past the 50-tix level and other cards played in those archetypes also saw gains.

The dominance of Ramunap Red decks helped push Amonkeht (AKH) up in paper and on MTGO. It will be instructive to see if it can maintain its power level or if the metagame can adapt to quash its advantage. If Ramunap Red continues to deliver strong results, it will be a great place to hunt for specs in September as the deck looks to remain intact heading into fall rotation. 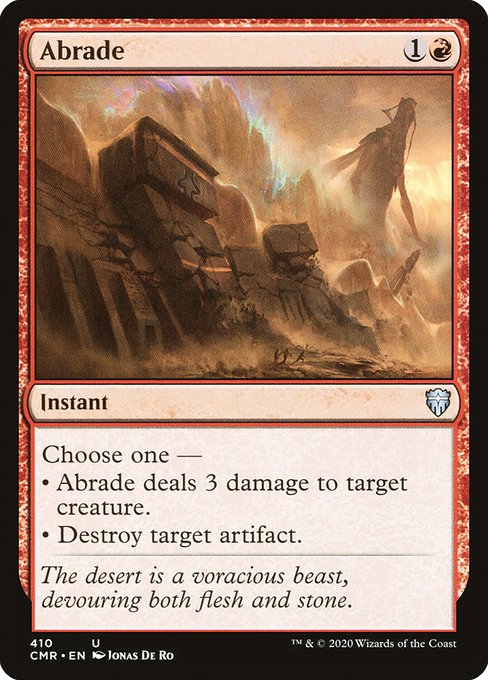 Part of the reason that the deck is performing so well is Abrade. Alongside Fatal Push, this looks to be a defining piece of removal in Standard going forward. Its utility against artifacts will suppress the artifacts from KLD and AER, including cards with the improvise mechanic such as Battle at the Bridge.Two other cards with diminished potential are Tezzeret the Schemer and Herald of Anguish. These might never find consistent play in a top deck in Standard and should be treated cautiously from a speculative standpoint.

The new reality in the Modern market is one of of declining prices. With the advent of Treasure Chests as Constructed prizes, long-term speculating on Modern staples is not what it was. The steady trickle of supply coming into the market means that a card that is out of favor tends to exhibit a declining price. Only cards that are currently in demand and seeing play in top decks will buck this trend and have the potential for price gains.

Inkmoth Nexus and Noble Hierarch are two good examples that have suffered as a result of the banning of Gitaxian Probe. Although both see in play in other archetypes, being key four-ofs in the powerful Infect archetype was what kept the prices of these cards up.

With this insight into how Modern speculating has evolved in response to Treasure Chests, I'll be cleaning up the portfolio over the next two months. The goal will be to get liquid by selling old Modern specs that have seen a flat or declining price. The reason to do this is in preparation for the anticipated buying opportunity in October that I previously discussed in this article.

For a complete look at my recent trades, please check out the portfolio. This week I decided to buy a number of copies of Primeval Titan. Although this card was not at a low price or a price bottom, it has exhibited a steadily rising price since the release of AKH. To me, this suggests a steady stream of players that are adding this card into their Modern collections, presumably to play either Amulet Titan or the TitanShift archetype. Both of these decks make use of Summoning Pact to put the Titan into your hand, and now HOU's Hour of Promise is another similar effect, adding another layer of redundancy.

Modern prices typically peak in August and September as players get bored of Standard and start dreaming of what might come in Ixalan and the fall rotation. We are entering the "lame duck" period of Standard, and Modern and Legacy are the biggest benefactors as interest in Standard wanes. I expect I'll be able to sell Primeval Titan for at least what I bought it for this week, and there's an excellent chance it will be over 20 tix by the middle of September. Although the portfolio is a little light in the liquidity department at the moment, riding a trend like this with a defined end is acceptable. Getting liquid in September is still the goal and riding the coattails of this giant in Modern fits the plan.