Below are the total set prices for all redeemable sets on MTGO. All prices are current as of September 11, 2017. The TCGplayer low and TCGplayer mid prices are the sum of each set's individual card prices on TCGplayer, either the low price or the mid price respectively.

As we get closer to the release of Ixalan (XLN) and Standard rotation, the price bottoms on the rotating sets are in sight. Below is a chart I've produced in the past, updated with the latest data points for Shadows over Innistrad (SOI) and Battle for Zendikar (BFZ). The price declines are moderating, and in the past week these sets have fluctuated around the 20 tix mark, with a few dips below that level. Buyers are stepping into the market and further large price declines are remote. Although the precise bottom is only visible in hindsight, all signs point to it being a fine time to start accumulating these two sets. Speculators who like to minimize their risk through diversification can happily start adding complete sets of SOI and BFZ into their portfolio, as I have started doing. 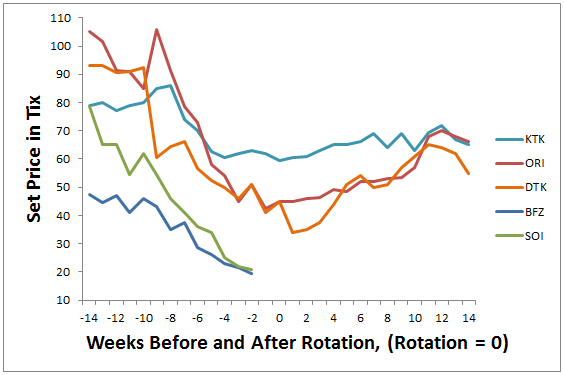 On the singles front, players looking to fill out their decks should have no concerns about picking up Modern staples like Ulamog, the Ceaseless Hunger at current prices.  Players can wait on more fringe cards like Traverse the Uvenwald, though, as a wave of selling is bound to occur once XLN is released.

The next chart covers Oath of the Gatewatch (OGW) and Eldritch Moon (EMN) in advance of rotation. Price declines for OGW are slowing down and it looks like it is putting in a bottom in the 30- to 35-tix range. EMN took a big tumble this week, and it looks ready to continue dropping in price. Both sets are tracking the price path of Journey into Nyx (JOU) quite well, and that set bottomed at 40 tix in the week after it rotated out of Standard. 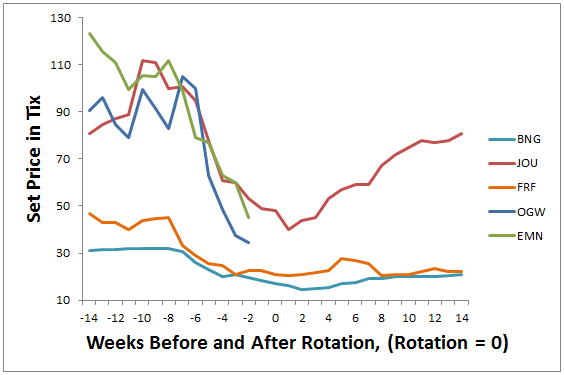 The market hasn't really started buying these two sets yet, though. Historically, large sets have been a better bet to see demand from redeemers, so speculators might be avoiding these sets as a result. There's also the price. Both are priced higher than the the large sets, and so they don't "feel" like they are on sale.

Relative to paper prices, both OGW and EMN are good value. I have started adding them into the Market Report portfolio, though I have avoided buying complete sets of EMN. Liliana, the Last Hope is still a 20-tix card that I think it will drop into the 15- to 18-tix range in the next two weeks. Regardless of whether it falls in price or not, I will round out my set purchases after the release of XLN. It's important to acknowledge that buying the pool of value that the complete set represents is important. Trying to pick winners and avoid losers will increase the risk of speculating on these sets. There are potentially higher rewards, but I prefer to take a diversified approach. Being approximately right on the timing is a lot easier if you are just considering how the prices of complete sets will evolve over the coming months.

The Magic world got its first look at Iconic Masters (IMA) this past weekend as players got to play Sealed Deck with the unrevealed cards at HASCON. IMA has a bevy of Modern reprints, and the market has been digesting this news in the past few days. Modern staples reprinted include Primeval Titan, Blood Moon, Thoughtseize, and Cryptic Command. Two reprints of note are Horizon Canopy and Mishra's Bauble, which both have high prices on MTGO based on their scarcity.

Although the exact details of how this set will be released on MTGO have not yet been announced, it will be coming in November. I expect a three-week release window similar to how Modern Masters 2017 (MM3) was released. The set looks like a lot of fun, so expect heavy drafting, and needless to say, the reprinted cards will be available at a good price when the set is being opened in Draft.

The price of an Amonkhet (AKH) block Draft set tumbled this week, dropping from 9.7 tix all the way down to 7.1 tix. Although we are a little under two weeks away from the release of XLN on MTGO, the market is looking ahead to drafting triple XLN and forgetting about AKH and Hour of Devastation (HOU) draft for a while. Based on how the price of AER and KLD boosters evolved after AKH was released in the spring, speculators should be getting their tix ready to buy a few boosters.

A 2 tix profit per Draft set over the course of five months is a very respectable profit. It takes a little effort to buy and sell these, but with a low spread, a ton of liquidity, and strong economic fundamentals backing up this strategy, speculating on AKH and HOU boosters is highly recommended for those with a little patience. It's a strategy that doesn't need to be monitored; you can buy these, forget about them, and then sell them in early 2018 for a profit.

For Draft sets of KLD block, the future is not so bright. After XLN is released, KLD block Draft will get bumped from the Draft queues and there will be no sanctioned play available with these boosters. AER boosters are at 3.5 tix and KLD boosters are 1.9 tix, but these prices will not hold without Draft support. Look for these to start drifting down and approaching their expected value as the winter approaches. KLD might drop to 1.5 tix or lower, but AER is definitely heading down to 2.5 tix or less. Any excess AER or KLD boosters in your account should be sold at current prices as soon as possible.

For a complete look at my recent trades, please check out the portfolio. This week I started buying sets that are rotating out of Standard, specifically BFZ, OGW and SOI. EMN will be added to the list when it gets closer to 40 tix.

Buying complete sets is a way to reduce single-card risk through diversification. The actual cards that see more or less play in Modern don't matter. What matters is that each of these sets represents a pool of value that can be turned into paper sets through redemption. As long as these sets are redeemable, a complete set will have price support. The redemption guarantee date for these sets ends in November, but historically, sets have been available for redemption up until the redemption cutoff date.

Once the release of XLN is in the rearview mirror, markets will start normalizing in both paper and on MTGO. Redeemers will start to think about stocking up on the rotated sets to take advantage of the price discount on MTGO. Demand from Modern players will start to push up the price of the Modern-playable cards from these sets as we head into the winter. Keep in mind that the Constructed format for Pro Tour Rivals of Ixalan will be Modern, so there will be an extra spotlight on that format over the next six months.