Below are the total set prices for all redeemable sets on MTGO. All prices are current as of October 10, 2017. The TCGplayer low and TCGplayer mid prices are the sum of each set's individual card prices on TCGplayer, either the low price or the mid price respectively.

Standard prices flucutuated this week, with Amonkhet (AKH) and KLD slightly positive and Hour of Devastation (HOU) up the most on the back of The Scarab God. AER saw a large decline as Heart of Kiran continues to suffer due to the rotation and drop in power of the Mardu Vehicles archetype. Walking Ballista is also back down to about 11 tix after getting as high as 17 tix.

For Ixalan (XLN), the drop is substantial, although the set should be finding price support soon, despite the lack of Standard playables in it. Relative to the last four large sets, XLN is the fastest to hit 60 tix after its release. The best buying window for full sets of XLN will be in January, just prior to the release of Rivals of Ixalan (RIX). If you look at the chart below, you can see how prices tend to evolve for large sets. There's no need to be thinking about speculating on XLN at the moment. 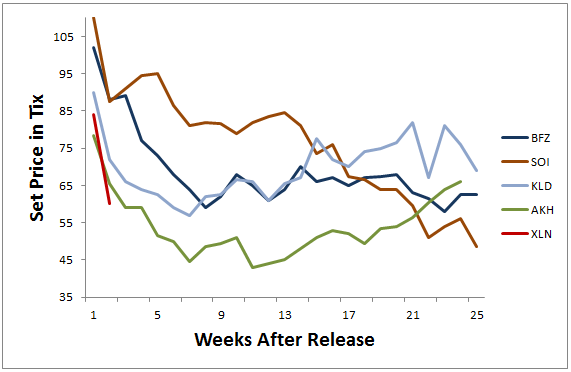 On the singles front, Concealed Courtyard from KLD has seen a substantial price jump in the last week, going from 4 to 8 tix. The Abzan Token archetype has a lot of novelty, and players are buying this key land in order to test out the deck. Botanical Sanctum is in a similar boat, but it's anchoring the Temur Energy mana base. It looks like a great time to be a seller on both of these lands.

Modern is on sale on MTGO at the moment, with many staples coming down in price from their summer highs. I've started buying up cards for the Market Report Portfolio, including format staples like Scalding Tarn, Karn Liberated and Mox Opal. There are plenty of opportunities for deploying tix right now, although it's still best to shop around and build up a diversified basket. Be sure to avoid cards that will be reprinted in Iconic Masters (IMA).

The sets that have just rotated out of Standard continue to firm up this week, with Oath of the Gatewatch (OGW) leading the way. Eldritch Moon (EMN) is off a little this week, but is still up 27 percent in the past month. Battle for Zendikar (BFZ) and Shadows Over Innistrad (SOI) are both holding the 20-tix level.

On the paper front, the volatile TCGplayer low prices all flashed green this week for these four sets. This isn't a great indicator that the bottom is in on paper, since TCGplayer low prices are not a reliable indicator as they don't include shipping costs. Nevertheless, it looks like BFZ has turned the corner as its TCGplayer mid price did flash green this week. EMN and OGW both look close to bottoming out, and I anticipate they will go positive in the next two weeks. SOI looks to be the laggard, and I think it will bottom in late October or early November.

The combined price of two HOU boosters and one AKH booster crested 7 tix this past week, with HOU current at 2.9 tix while AKH sits at 1.2 tix. At this price, I will not continue to buy boosters for speculative purposes, although the price is still reasonable relative to the expected price in the long term. Unless MTG Arena significantly disrupts drafting on MTGO, I anticipate the price of an AKH block draft set will approach 9 tix by the end of February.

Interestingly enough, the trend on the individual boosters has diverged significantly. While both HOU and AKH were around 2 tix at the time of XLN's release, since then, their prices have gone in opposite directions. This is a great lesson in diversification in the face of uncertainty. If I had chosen to buy one over the other, my short-term return would have been magnified in absolute terms, but it also could be a large negative return.

Without any good reason to pick one over the other, I stuck to buying them in draft set ratios, which is the easiest way to buy and sell boosters to the bots. It will be worth keeping in mind for April, when Dominaria (DOM) is scheduled to be released. At that time, I will be scooping up cheap XLN block draft sets, but if the same pattern emerges, I'll start targeting Rivals of Ixalan (RIX) boosters more aggressively.

For a complete look at my recent trades, please check out the portfolio. This week I took the unusual step of selling a component of my complete HOU sets, that being the very popular The Scarab God. At close to 50 tix, this single card is two-thirds the value of the whole set, which is an unusual, though not unprecedented situation. Checking the historical data for a similar situation is a time-honored tradition of MTGO speculation, and in doing so I learned that Jace, Vryn's Prodigy // Jace, Telepath Unbound experienced a similar trend as it captured huge gains in the BFZ and Khans of Tarkir (KTK) blocks Standard format. Jace ultimately crested at just under 100 tix, but it eventually came back down to earth, staying mostly in the 20- to 30-tix range after the release of OGW. 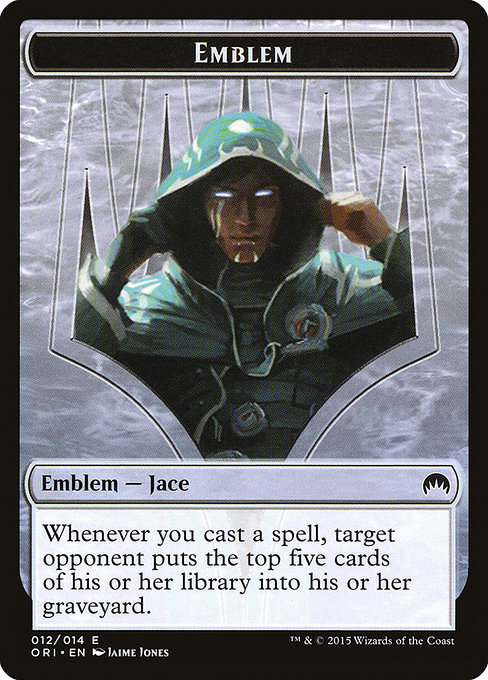 Although it's possible The Scarab God follows a similar track, there are lots of reasons to believe it won't. First of all, with one flagship card supporting the value of the set, there's not much incentive to crack boxes in paper. But if the metagame shifts and all of a sudden there's two or three valuable cards to open, cracking sealed product will start to look a lot more appealing.

Instead of shelling out cards for singles, players will start playing the lottery by cracking boosters. Dealers who need stock will also start cracking boxes. For the moment, there's no economic incentive to do this, so The Scarab God is riding high as the only source of value in the set. And MTGO prices are following suit, as long as redemption is available. However, HOU's redemption window will close in November, and when redemption ends, the price of The Scarab God will be driven solely by its utility in Standard.  A continued supply crunch in paper will not see any relief from redemption after November.

Next, metagame shifts will eventually occur. It might take until the release of the next set, but The Scarab God's relative play value in HOU will have to come down. Right now, this one card is the best card in the set and the most widely played. It's also been subject to heavy buying interest as players acquire their copies. This is not likely to last. Inevitably, the format will speed up as more cards are introduced.

Lastly, if a card like Jace, Vryn's Prodigy // Jace, Telepath Unbound was in Standard during the era of Treasure Chests, you can bet your last tix that it would show up on the curated list at some point. There's no doubt in my mind that Lee Sharpe will add The Scarab God onto the curated list in order to capture its value for awarded prizes.The days of seeing a 100-tix card like Jace in Standard are gone – whenever a card's price gets truly out of whack, there will be a strong incentive to put that card into chests in order to help level things out.

With the sale of this one card, I have almost recouped the cost of my full set HOU position. I'll think about selling the rest in the next few weeks to capture the full gains, but it's possible the best course of action is to just hold for the moment and see how the Standard metagame develops.