Below are the total set prices for all redeemable sets on MTGO. All prices are current as of November 20, 2017. The TCGplayer low and TCGplayer mid prices are the sum of each set's individual card prices on TCGplayer, either the low price or the mid price respectively.

Last week I got a bit of a shock when I realized that Battle for Zendikar (BFZ) and Oath of the Gatewatch (OGW) both went offline for redemption, alongside Dragons of Tarkir (DTK), Magic Origins (ORI), AKH and HOU. What happened was that the redemption cutoff date for BFZ and OGW was set to be about half a year after they were scheduled to rotate out of Standard. When Wizards of the Coast returned the Standard rotation schedule back to its previous incarnation, this meant that these two sets would get an additional six months in Standard, but they didn't adjust the redemption cutoff date. My assumption was that the cutoff date would adjust to be about a year after they rotated out of Standard, like all sets prior. This assumption was a big tactical error on my part, leading me to allocate too many tix to these two sets.

With redemption ended on BFZ and OGW, the link between paper and digital prices has been severed. Any card that had most of its value due to redemption will be falling in price and should be sold off immediately. Cards like Omnath, Locus of Rage and Kozilek, the Great Distortion come to mind. Modern staples like Thought-Knot Seer will be in demand as we get closer to the Modern Pro Tour in February, so holding these is fine, but a fringe Modern playable card like Nissa, Voice of Zendikar has more downside than upside at the moment.

When I make a blunder like this, it's important to realize a few things. One, mistakes happen, but it's important to recognize what went wrong and make adjustments as necessary. In this case, a rapid sell off in junk rares and mythic rares was the best thing to do. Next, good diversification has protected me from the full downside on these two sets. In October, I was also buying Shadows over Innistrad (SOI) and Eldritch Moon (EMN), which have shown nice gains and still have runway ahead of them. In this case, buying EMN was a difficult decision since it felt expensive relative to the other sets, but it looks like it will be the big winner at the end of the day. Without proper diversification, I might have avoided this set and torpedoed my returns.

A full set of Ixalan (XLN) has shown some stability in the last week; the 55-tix level is the new price floor and players looking to round out their collections with this set should consider that level for a purchase. I'll be waiting until the release of Rivals of Ixalan (RIX) to ultimately start speculating on XLN. February will be a good time to be loading up on full sets of XLN, though the end of XLN block draft in the spring will be better for targeting full sets of RIX and singles.

The one exception to this is foil mythic rares from RIX. This is going to be the slam dunk trade in Standard during the month of January. The economic reasoning around buying foil mythic rares hasn't changed, and the example of XLN shows that a lack of Masterpieces can support higher set prices, including foil sets. This magnifies the opportunity, and I think XLN and RIX will ultimately show the best recent returns on this strategy.

In terms of when to sell Standard cards, I'll want to be a seller in February of any positions that are stragglers. This basically looks like singles from KLD, AER, AKH, and HOU, including those ones with Modern crossover appeal like Spirebluff Canal. Hopefully RIX will shake up the Standard metagame and push lesser used cards into the foreground. I'm holding Heart of Kiran with this exact plan. It's been hovering around the 8-tix mark, but it doesn't look like it will be breaking out in this iteration of Standard.

Modern prices renewed their march higher on Thanksgiving weekend in the US. with Mox Opal close to reaching its two-year high and Scalding Tarn cresting 30 tix for the first time since the summer of 2016. There's no doubt that the bull market is continuing for the moment, so I am still holding on to my positions, while also adding Modern staples and playable cards from Iconic Masters (IMA).

January will be a prime selling window in advance of the Modern Pro Tour. Vintage Cube is coming for the holidays, and this will take the focus of many players. Once we ring in the New Year, players' attention will shift to the next big ticket item on the agenda, that being Modern. There's always a few stragglers who wait until the last minute to get their decks together, so this is when the patient speculator wants to be a seller.

With IMA's draft winding down, the price of an XLN booster has recovered, hitting 3.2 tix briefly this week before coming back down to 3 tix. If you are still holding, don't wait for a further rebound and just sell now. The chances of this recovering to 3.2 tix to 3.3 tix level are slim. As mentioned, Vintage Cube is coming in December for the holidays and XLN draft will increasingly be seen as a lame duck draft format with the release of RIX so close. I don't want to be holding any XLN boosters until the release of Dominaria in the spring.

For AKH and HOU boosters, February and March will be the prime selling window. It's okay to lighten up on these now, but there is still 0.5 to 1.5 tix in upside for a draft set. If I need tix, I'll sell some boosters, but for the moment these are still a strong hold.

For a complete look at my recent trades, please check out the portfolio. With the end of HOU redemption, The Scarab God sold off and dipped below 30 tix this week before recovering to 32 tix. It's very natural for this type of activity to occur since redemption is a real source of value. When it disappears, the card has lost value and a sell-off ensues. However, the nature of the any market is that when sellers overwhelm buyers, the price drops too low. In this case, "too low" means beneath its play value. Although there is no perfect way to measure play value, Chandra, Torch of Defiance has regularly cycled up and down between 30 and 40 tix and hasn't been redeemable for months. Thus, its price must reflect its play value. I'd look for The Scarab God to take a run at 40 tix sometime over the next three months.

What was interesting about this trade was the price of the Masterpiece version of this card. Even though the price of the HOU version had already recovered to 30-plus tix, there were still Masterpiece versions available for 28 tix or less. Scooping up these cheaper versions seemed like a no brainer, since it is exactly the same in-game piece. If you look at this chart from GoatBots, you'll see the two version largely track each other over time. 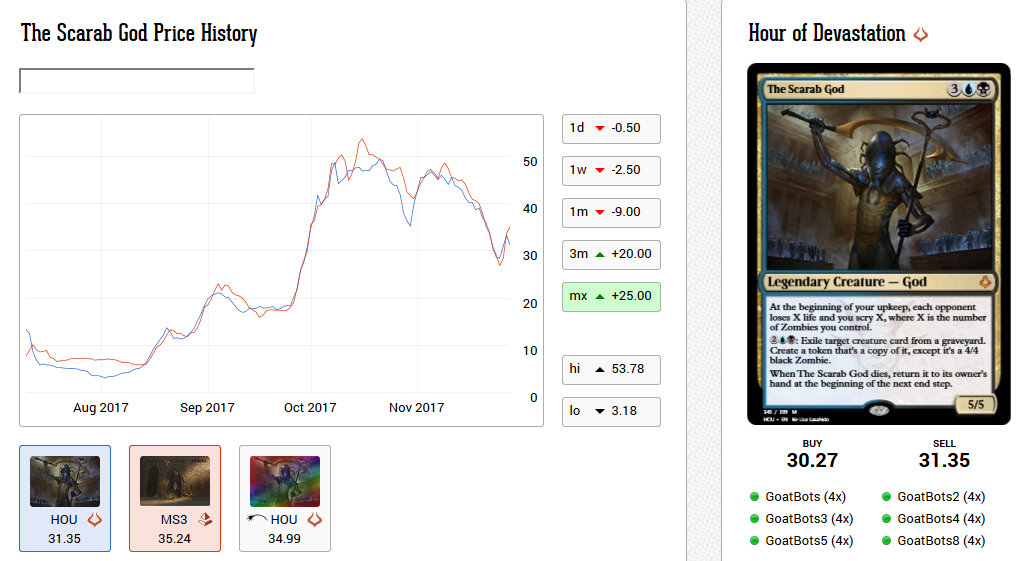 A sustained drop below 30 tix combined with a shift in the Standard metagame would force me to reevaluate this position. A jump into the 38- to 40-tix range is a good target price for an exit.

I made a late trade this morning just prior to the scheduled downtime where I snapped up 60-plus copies of Primeval Titan. This card peaked at 20 tix just a few months ago, but had fallen into the 6 to 7 tix range with the reprint in IMA. Combined with a downturn in Titan Shift's play in Modern, this has created an oversold situation perfect for speculators. A 9- to 12-tix price is more like fair value on this card, and I anticipate a return to this price range in the next six weeks. If Titan Shift sees a resurgence in the Modern metagame, a 12- to 15-tix price is conceivable.