Which deck is better: UR Breach or UR Kiki-Jiki? Undoubtedly this is the question I received the most while playing this deck on Twitch. The decks are incredibly similar, both relying on Blood Moon and an A+B combo, but they do have different strengths and weaknesses. My write-up and video series with UR Breach can give you a little bit of a background on that archetype if you are interested, and here I'll largely be focusing on the differences between the two similar archetypes. 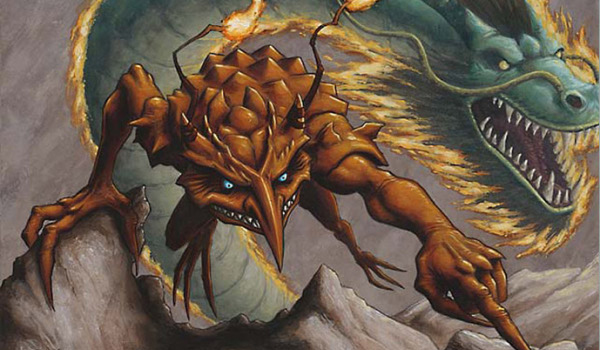 The largest advantage of the Breach deck lies within its combo. Aside from countermagic and specific discard, it can be difficult to interact with Through the Breach and even more difficult to interact with Emrakul, the Aeons Torn. Outside of tapping it with Cryptic Command (or hilariously enough a Pestermite) you are going to be "annihilated" for 6 and have to deal with 15 power coming your way. One weakness worth mentioning, however, is that 15 points is not always enough. Frequently Modern manabases will have already taken care of those first five points, and occasionally Snapcaster Mage teamed with Lightning Bolt can finish the job—but this will not always be the case. There will be close games with this deck where you attack with an Emrakul and lose anyway.

Contrast this to the Kiki deck featured today. You will always win after a successful assembly of your combo, but how often will that occur? Your pieces are dramatically more fragile. Kiki-Jiki, Mirror Breaker is a 2/2. Pestermite is a three-mana 2/1 and Deceiver is a three-mana 1/4. Let that sink in; these pieces are not safe from Modern removal. One of your pieces (maybe two) will be soft to burn-based removal, and on top of that Path to Exile or a revolted Fatal Push are equally sufficient. Sometimes your opponent just doesn't have it or you can set up a timely tap with a redundant Pestermite, but more often than not, removal will easily break up your combo. 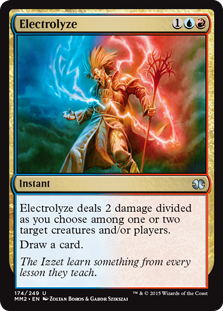 The strength in the UR Kiki deck lies within its plan B. Both decks have an underlying tempo plan built into the deck. Any deck with the ability to play Bolt, Snap Bolt, is going to be interested in going after their opponent's life total in some portion of its games. Instead of having an uncastable 15/15 or a five-mana do-nothing sorcery, this deck has flying 2/1s with a relevant enter-the-battlefield trigger. It does still contain a somewhat poor five-mana value creature, but most importantly it is only occupying two slots rather than four. Add Vendilion Clique, Electrolyze, and the aforementioned Snapcasters the the mix, and you have a clear tempo-oriented plan.

I've definitely had a good time with this deck thus far. While the advantages within each of the two archetypes are clear to me, I'm uncertain with archetype is better in the meta at large. I must admit at the very least I am swayed somewhat by the tempo argument within the Kiki deck; that kind of solid underlying secondary plan (arguably primary plan) is appealing to me. I discuss this a bit in the video content, but there are other avenues to explore with this archetype that remove Blood Moon and instead pursue a third color for something like Tarmogoyf, or Tasigur, the Golden Fang alongside Kolaghan's Command. I have not tested this myself but it could very well be a solid way to develop the archetype.

I hope you enjoy the matches and as usual, I'm interested to hear what kind of content you'd like to see moving forward so I can continue to evolve and improve my videos. Please let me know your thoughts, and any improvements you would like to see concerning formatting, presentation, or whatever else strikes your fancy. If you'd like to see similar content, check out my Twitch channel for some live Modern games!

UR Kiki-Jiki, by Ryland Taliaferro

6 thoughts on “Video Series with Ryland: UR Kiki-Jiki”