Hardened Scales Affinity has been getting some extra attention of late. Ryland plays the innovative take on the classic archetype through a competitive league.

Good ol’ Delver of Secrets. For as long as this little Human/Insect has been around, people have been trying to make him work in Modern. The format has reasonable interactive spells alongside a decent supporting cast of threats, but one problem has persisted: the lack of good cantrips. A tight banned list prohibiting the use […] 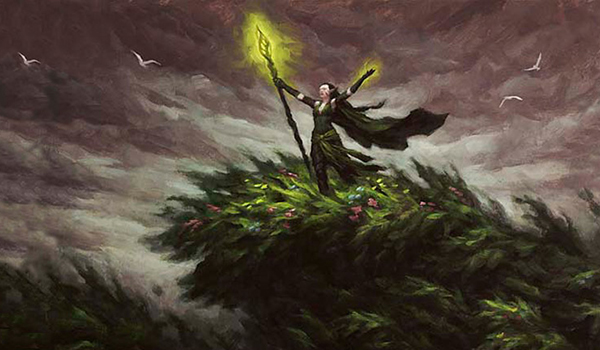 Aaron Barich took down the Invitational this past weekend infecting the competition in the Top 8. He is no stranger to the deck, but his performance is a good reminder that the deck is by no means dead. The loss of Gitaxian Probe over a year ago now was followed by a steep decrease in […]

There are a few cards in Modern that everyone absolutely loves unconditionally. Particularly the ones that don’t allow them to cast their spells. You know, we have Blood Moon, Stone Rain, and Choke as some common fan favorites! Spreading Seas for the less devout, and Sea’s Claim for the more dedicated. Ghost Quarter and Field […]

Last time we battled with Mardu Pyromancer, one of the decks I would consider placing among the top three in the format. This time we’re going to mix it up with something a little spicier. The deck caught my eye after quietly sneaking in to the Top 8 of the SCG Baltimore Team Open. Star […]

The current Modern climate discourages players from playing fair more than any other Modern climate in recent memory. Ever since the unbanning of our old pals Jace, the Mind Sculptor and Bloodbraid Elf, the format has gotten faster and more linear with each passing day. People trying to beat the established archetypes have flocked to […]

Ah yes, everyone’s favorite archetype, Bogles. A deck so frequently complained about that we can’t even agree on how to pronounce its name. Hate it or love it (I imagine many more exist on the hate-it side), it’s been around for a while and isn’t likely to go anywhere. The hexproof mechanic is certainly what […]

Hollow One has risen to become one of the most played decks in the format. Logan Nettles, Jaberwocki on both MTGO and Twitter, compiled data from the recent MOCS monthly event. He found that Hollow One had a metagame share of 12.7% in that event as well as a win rate of 61.60%—the highest in […]

Well you had to know it was coming. We played with Jace, the Mind Sculptor last week, so this week was a bit obvious. I just wanted to give Bloodbraid Elf her time in the sun too! Frankly, Bloodbraid Elf is doing plenty fine without me giving her attention. Jace is the one who seems […]

What an absolutely wild week for Modern. Playing with Bloodbraid Elf and Jace, the Mind Sculptor legal has been incredibly exciting and exhausting. With so many shells to try, and so many changes in deck-building philosophy (particularly for control decks) I feel like I’ll never have enough time to explore all the avenues! Today’s Blue […]

Today we have quite a treat coming straight from the desk of Willy Edel. His list was posted about a week-and-a-half ago, and as soon as I saw it I knew I was interested. Thoughtseize in my Thought-Knot Seer deck? Yes, please! While some two-color Eldrazi decks have been popping up lately (RG Eldrazi with […]